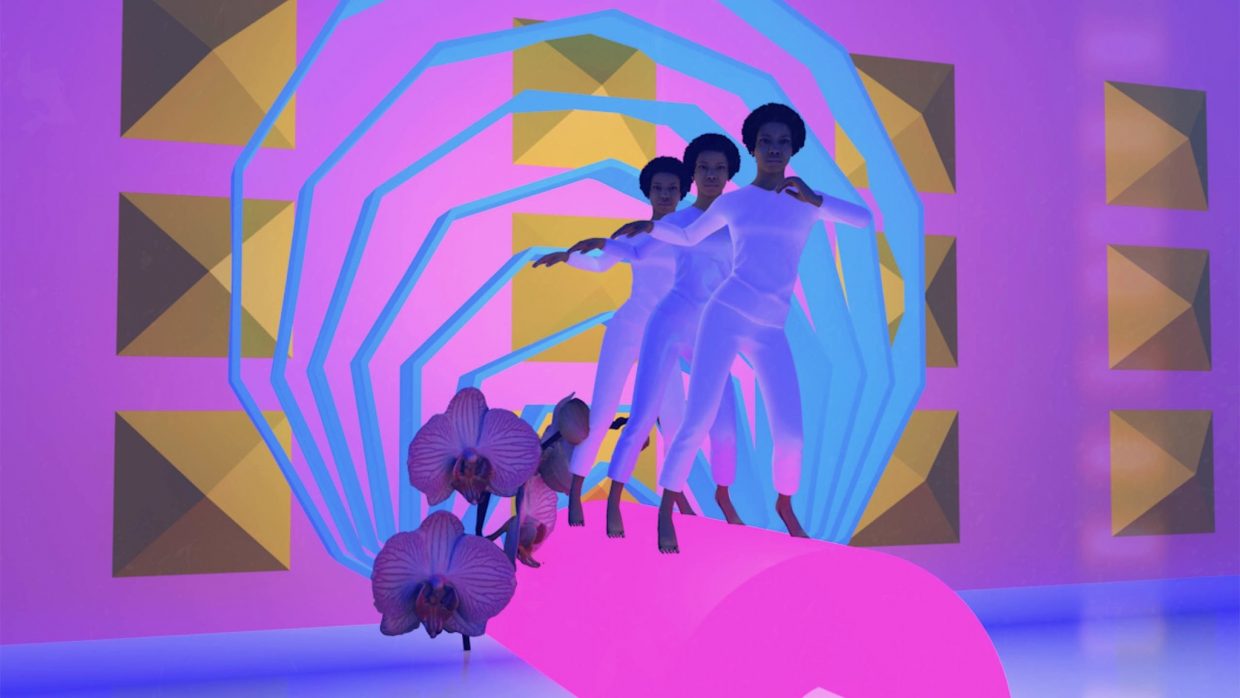 Traveling the Interstitium with Octavia Butler

“It’s about energy — how do we preserve the energy around the work and the artist?” That’s Sundance Film Festival director Tabitha Jackson speaking this morning at Sundance’s opening press conference about the thinking that went in to this year’s necessarily altered pandemic edition. With a slimmed-down schedule and screenings happening through the Sundance platform as well as at various “satellite screens,” Sundance has fully embraced the challenges and potentials of translating the Sundance experience to the ways in which we are living our (viewing) lives now. But several principles guided the Sundance team, said Jackson. One was the concept of “energy” — “making sure there’s an anticipation around the films,” elaborated Jackson. “You need to scramble to get a ticket — that is the recognizable Sundance experience.” Programming windows force viewers to make decisions about what to see rather than present an unstructured on-demand window. The second was “centering the artist.” Sundance Executive Director Keri Putnam said that extensive conversations occurred with filmmakers and other stakeholders around everything from screening capacity to outreach. She asked, “Could this year afford an opportunity to potentially drive a broader impact for artists?” The feat of building and launching the festival on its bespoke digital platform was akin to “flying a plane while building it,” said Gina Duncan, Sundance’s new director of programming.

As I finish typing this intro, though, the festival is just starting, so I’ll jump right to our picks. (Much is sold out, but you can check for remaining tickets here.) To help you decide what to watch, we’ve put together a list of 20 films and new media pieces that we’re excited to see on the basis of prior knowledge of the filmmaker’s work, early buzz, and, in some cases, advance screenings. Check out our selections and see you around (virtual) Main Street. (Oh, and for those who want to imagine themselves at the fest with a film, I recommend this succinct TikTok…)

Wild Indian. We placed Native American filmmaker Lyle Corbine, Jr. on our 2019 25 New Faces list on the basis of two Malickian shorts and a feature script. Of the shorts, I wrote, “With roving camerawork, eerie scores and sound work bridging the external and internal worlds, the films are structured, as Corbine, Jr. describes, like a series of diary entries speaking to the complexity of contemporary Native American identity.” The feature script I read was this one, a charged drama dealing with Native identity, coded masculinity, guilt and shame, and it toplines a shockingly cold-hearted protagonist. Based on his shorts and this screenplay, Wild Indian is one of the most anticipated films from this year’s festival. — Scott Macaulay.

I Was a Simple Man. Chistopher Makoto Yogi’s first feature, August at Akiko‘s, took an elegiac look at a man returning home to Hawai’i after ten years away, with a tone somewhere between Apichatpong Weeresethakul and a more benevolent David Lynch. His follow-up promises to take a similar approach to the story of a Hawai’ian family bracing itself for the death of its patriarch. — Vadim Rizov.

The Sparks Brothers. Edgar Wright’s first nonfiction feature is a fan’s super-engaged tribute to and history of Sparks, brothers Ron and Russell Mael’s cultishly beloved band, in operation since 1970. — VR

7 Sounds. Sam Green has delivered some of my most memorable Sundance experiences with his “live film” documentaries, including his 2018 A Thousand Thoughts, which I saw at its Egyptian Theater premiere with the Kronos Quartet playing on stage. This year, Green is delivering something scaled to both the tenor of the times and the manner in which we’ll be viewing — or, mostly, listening. He describes the 30-minute 7 Songs, a collaboration with artist, musician, songwriter and DJ JD Samson (MEN, Le Tigre), as “kind of a cross between a radio documentary, a sound walk, and ASMR.” — SM

In the Earth. After his larger-budget not-a-remake Rebecca for Netflix, Ben Wheatley returns to the lower-budget regions of films like The Kill List and Sightseers for a virus-themed science-fiction film shot in 15 days in August, 2020. — SM

A Glitch in the Matrix. Are we living in a simulation? For anyone who has puzzled the three possibilities of Nick Bostrum’s simulation hypothesis — or who is just a massive fan of Philip K. Dick and The Matrix — Rodney Ascher’s A Glitch in the Matrix will be a pure delight. Widening his frame of reference from the subreddit that shares its title, Ascher examines the philosophical underpinnings (Plato’s cave, Descartes’s evil demon), pop-culture realizations (not just Dick and the Wachowskis but a vast archive of science fiction making this, as Vadim Rizov points out in the new Filmmaker, “the Los Angeles Plays Itself of simulation theory) and real-world implications (… um, social breakdown?) of believing that we’re all living in some kind of MMO — and that we’re not the players…. Read the new issue of Filmmaker for Penny Lane’s interview with Ascher. — SM

Mother Schmuckers. This debut feature from brothers Harpo and Lenny Guit (born in France, but based in Brussels) is a lively 70-minute comedy, shot in 1.33, tonally pitched between Animaniacs and Freddy Got Fingered. — VR

R#J. Carey Williams had one of the best shorts in recent years with Emergency, which landed him on Filmmaker’s 25 New Faces list. For his feature debut he’s gone back to a classic, enduring narrative — Romeo and Juliet — for a version in which young love is mediated, as it is today, through the screen. — SM

Strawberry Mansion. Sylvio directors Albert Birney and Kentucker Audley team up again for this futurist surreal comedy, in which every human experience is taxed, including dreams. (With advertisements popping up throughout our unconscious, this looks like the second film on this list to echo the work of Philip K. Dick.) In addition to Audley and Penny Fuller, the film stars other actor-directors, such as Grace Glowicki and Linas Phillips. — SM

All Light Everywhere. Philosophically inclined documentary director Theo Anthony follows up his acclaimed feature Rat Film and ESPN short Subject to Review with this doc on “the observer effect,” which details the ways in which devices shape perception. — SM

Passing. If there’s a Saturday-night-at-the-Eccles big acquisitions title here, early buzz suggests it could be Rebecca Hall’s drama, Passing. Adapted from Nella Larsen’s book, it stars Tessa Thompson and Ruth Negga and arrives via Nina Yang Bongiovi’s and Forrest Whitaker’s Significant Productions — backers of such films as Fruitvale Station and Sorry to Bother You. It also comes with some pre-release interviews that address the personal connection this actress-turned-director, who’s been so good in films like Christine and The Gift, has to the project. — SM

El Planeta. Argentinian visual artist Amalia Ulman, whose work has crossed galleries, the ‘net and performance spaces, makes her feature debut with this highly recommended “comedy about eviction” — a mother/daughter tale set in the shadow of Spain’s economic crisis and starring Ulman and her own mother. In Filmmaker‘s Summer issue, Ulman wrote a bit about finishing the film during the pandemic, in which she found that going from shooting in a pre-pandemic world to editing in quarantine echoed themes from the film: “…humanity finds itself lost, confused, just like Leonor and Maria in the movie, naively clinging to a reality long gone, while an invisible threat looms over all of us, rendering our mundane miseries absurd.”

We’re Going to the World’s Fair. With their past Filmmaker column, Continue Watching (and in pieces like this one, on the history of the fan mutation), Jane Schoenbrun explored the often glitchy emotional regions opened up by the collision of the internet, fan culture and the decaying apparatuses of independent film. Their first narrative film (A Self-Induced Hallucination, a doc about the internet Slender Man myth told entirely through YouTube clips, premiered in Rotterdam in ’18), We’re Going to the World’s Fair has elements of J- and found-footage horror, and promises to be deeply knowledgeable about the ways in which connections as well as fears are created and manipulated online. — SM

John in the Hole. Visual artist Pasqual Sisto’s film debut is the sole title arriving at Sundance bearing the prestigious “Cannes selection” tag. (Remember, Cannes announced the picks for its cancelled 2020 edition, which have then gone on to play at other festivals throughout the year.) As a visual artist, Sisto is known for exploring “liminal space, a sort of limbo between the real and the virtual; between presence and representation; between the imagined and the concrete,” which sounds on point for this story of a boy who traps his family in a hole in the ground. — SM

On the Count of Three. A black comedy about checking out, On the Count of Three, which stars Christopher Abbott, Tiffany Haddish, and director Jerrod Carmichael, known for his HBO comedy specials and NBC series, is another of the big sales title at this year’s Sundance. Dealing with depression, suicide and abuse, it prompted early viewer Jonah Weiner to say, “It was fun to watch, and it also harshed me out,” to which Carmichael replied, “I’m always searching for my more complicated thoughts, the things I wanna bring up for exploration, the things that are really on your mind. We tend to want to distract ourselves, and I get it — people want, like, uplifting poems. But my instinct is always to go to a layer of complication. The art feels more alive that way.” — SM

Traveling the Interstitium with Octavia Butler. The work of visionary science-fiction novelist Octavia Butler provides the context and jumping off point for the virtual exploration of this interactive web XR experience. The list of artists and collaborators alone makes this a much watch. it’s lead artists are Sophia Nahli Allison, idris brewster, Stephanie Dinkins, Ari Melenciano and Terence Nance, and listed as key collaborators are Yance Ford, Sharon Chang, and Kamal Sinclair. — SM

Flee. This nonfiction Danish documentary takes the rotoscope animation approach to the story of an Afghan refugee. — VR

Cusp. A stop at a gas station while on a road trip and an Instagram add led to the creation of Cusp, a feature doc that’s said to be visually arresting about three teenage girls confronting “the dark corners of adolescence at the end of a fever dream summer.” Parker Hill and Isabel Bethencourt are the debuting filmmakers. — SM