“It Was Such a Jiggle of Consciousness, Such a Beautiful Monstrosity…”: Salomé Jashi on Her Sundance-Debuting Taming the Garden 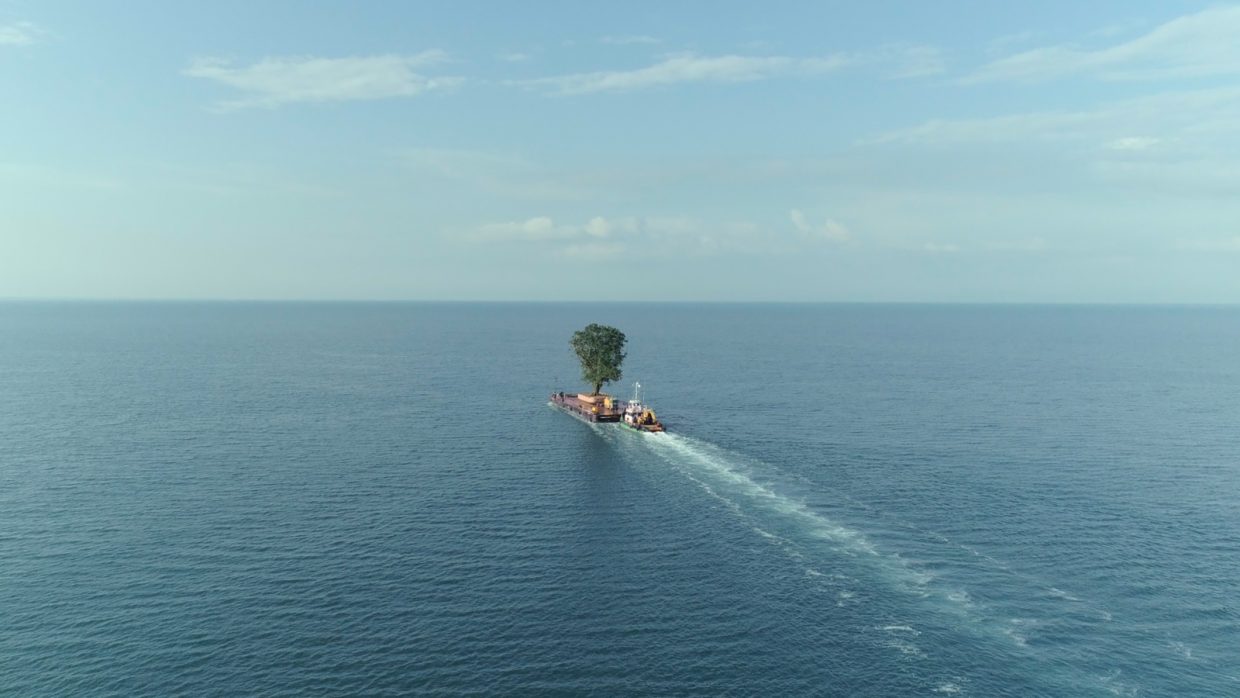 Salomé Jashi is not a name I was familiar with before catching her exquisitely crafted Taming the Garden, which made its Sundance debut on January 31 in the World Cinema Documentary Competition. That said, the Georgian director (and founder of not one but two production companies), whose 2016 doc The Dazzling Light of Sunset took top honors at Visions du Réel, is certainly a prolific filmmaker I’ll now be keeping an eye out for.

With her latest, Taming the Garden, a “cinematic environmental parable,” Jashi weaves together a series of perfectly composed shots, containing the lush magical nature on the Georgian coast, with a darker reality sometimes glimpsed only in fragments within the frame. It’s the tale of a wealthy and powerful man (tellingly, he’s never named), who has been traveling to impoverished villages for years to pursue the oddest of hobbies — collecting majestic trees, many of which have been part of their communities for over a century, silently bearing witness from as high as 15 feet above the land. In exchange for allowing (though one wonders if this is ultimately a matter of free will) the man to take away their towering giants and transplant them to his faraway walled-off garden, the residents are left with less foliage and meager payments. Also ripped up roads, massive empty holes, and the destruction of more ordinary trees that had the bad luck of standing in the way of machinery’s progress.

Fortunately for Filmmaker, Jashi found time the week before Sundance to fill us in on her film’s origin story, the multiple themes she was attempting to unravel, and what it’s like to pursue nonfiction filmmaking within the confines of a politically unstable nation.

Filmmaker: How did the film originate? Is this man’s “unusual hobby” a big story in Georgia?

Jashi: In Georgia a tree floating in the sea has become banal scenery. We have become used to witnessing the hobbies of the country’s richest man, who at one point was Georgia’s prime minister, and is still considered to be the most powerful person, a shadow leader, even if he officially has retreated from politics.

The film’s idea originated as I witnessed the first transplantation — the first time a tree “sailed.” That surreal image pleaded to be contemplated upon. It was such a jiggle of consciousness, such a beautiful monstrosity, that I straightaway picked up the camera to understand it, to investigate it and depict it, this example of one person’s unleashed desire.

Filmmaker: I read that it was difficult for you to get villagers to go on camera for fear of retribution from this wealthy tree collector, whose name is never spoken. So what precautions did you have to take to both gain access and keep everyone safe (and feeling safe)?

Jashi: Every time we would film in a village we would usually feel a spirit of conspiracy in the air. It was difficult for people to understand who we were, a crew favoring the wealthy commissioner or a highly critical television crew. In Georgia the media and the political scene is extremely polarized. There are mainly black and white visions and interpretations.

So people at first were quite sensitive when they would see the camera. They were confused which side to take, how to represent themselves. In our fragile democracy free expression needs some daring. Many fear the consequences of free speech, even if it’s protected by the constitution. Well, no one would go to jail for speaking up, but staying low is more of a Soviet legacy. Subordination is in the blood, unfortunately.

So many of the people we met, even if they had very strong opinions, hid away from the camera, preferred not to be involved, in order to stay “clean.” But definitely not all the people we met were silent. It just took some time to find them. As we were filming for a long period of time we often revisited places, met the same people again and again. This personal connection helped us to gain access, and then at some point some people felt at ease with the camera.

Still, the film offers just a part of what was going on in people’s minds. I think it is not even necessary to lay bare all the emotions and passions. The film creates a sensation of something in the air, which might not be fully graspable, where the audience can imagine the backstory, the back of minds.

Filmmaker: I viewed this film as a sort of universal, environmental cautionary tale, but you’ve referred to it as touching on forced migration, and specific to the instability in your own country. (You’ve also described it as paradoxically both surreal and fact-based – which may not be all that paradoxical in these strange times we’re living in.) Did you set out to explore multiple themes, or did they organically emerge during production, or throughout the editing process?

Jashi: The film tells the story of a rich man’s desire to collect large century-old trees. This is the baseline of the film from which multiple interpretations spring out. Those layers unveiled themselves as we filmed and edited. Yes, the film is about uprooting, yes, it is surreal; it is about power, it is about money, it is about loss, it is about greed, it is about passion and desire, it is about beauty and ugliness. One can go in many directions in trying to pin it down. Not just the film itself, but the act that it depicts. There are certain scenes in the film that imply more than what we physically see, which evokes other thoughts and sensations.

Filmmaker: You’re the founder of two production companies in Georgia, Sakdoc Film and Microcosmoss. So what are some of the greatest challenges for producing nonfiction work in a developing country that, having gone through both a revolution and a war in the past two decades, seems to be in constant flux?

Jashi: When I am asked why I like to live in Georgia I often reply, “Because it makes me angry.” Well, at times it’s also ridiculous and bitterly funny. It’s also a playground for wild ideas, like the one in the film.

This never-ending flux triggers such adrenaline that it’s not a surprise when my filmmaker colleagues put all their resources and energy into depicting the environment around them, with a miserable amount of funding available in the country. The documentary community has notably grown in Georgia in recent years and, interestingly, most documentary filmmakers are women. We want to depict what is happening around us because we find it astonishing, we find it disturbing — we want to change it, or challenge it.

The difficulty we face is the lack of funding. There is basically just one source of institutional film funding in Georgia, which is the Georgian National Film Center, an institution I appreciate for their independence and devotion to the local industry. But their annual budget for documentary film production is equal to one low budget documentary in the United States. So we often seek coproduction partners, as was my case. Not only for the funding, but also to bring in the expertise, the external eye. The local broadcasters are absolutely not involved in the production of independent cinema. There is no, or extremely rare, cases of private sponsorship. And there is very little distribution. Unfortunately, an art house cinema is nonexistent. Three former big cinemas are currently for sale in Tbilisi, the capital city, awaiting investors to turn them into shopping malls.

Filmmaker: So have all the doc’s participants seen the film? What’s been the reactions to both the work, and the Sundance premiere?

Jashi: The Sundance audience will be the first to watch the film. The strict lockdown in Georgia has restricted travel and gathering for months. Even public transport has stopped functioning.

Besides that, there is no central protagonist in the film. Those appearing in the film, and there are many of them, live in various villages and cities. It has not been possible to organize screenings till now. As the pandemic eases up, we plan on designing a proper screening strategy to reach out to them.