“The Colors and Textures of Being a Teenage Girl”: Director/Cinematographers Parker Hill and Isabel Bethencourt on Cusp 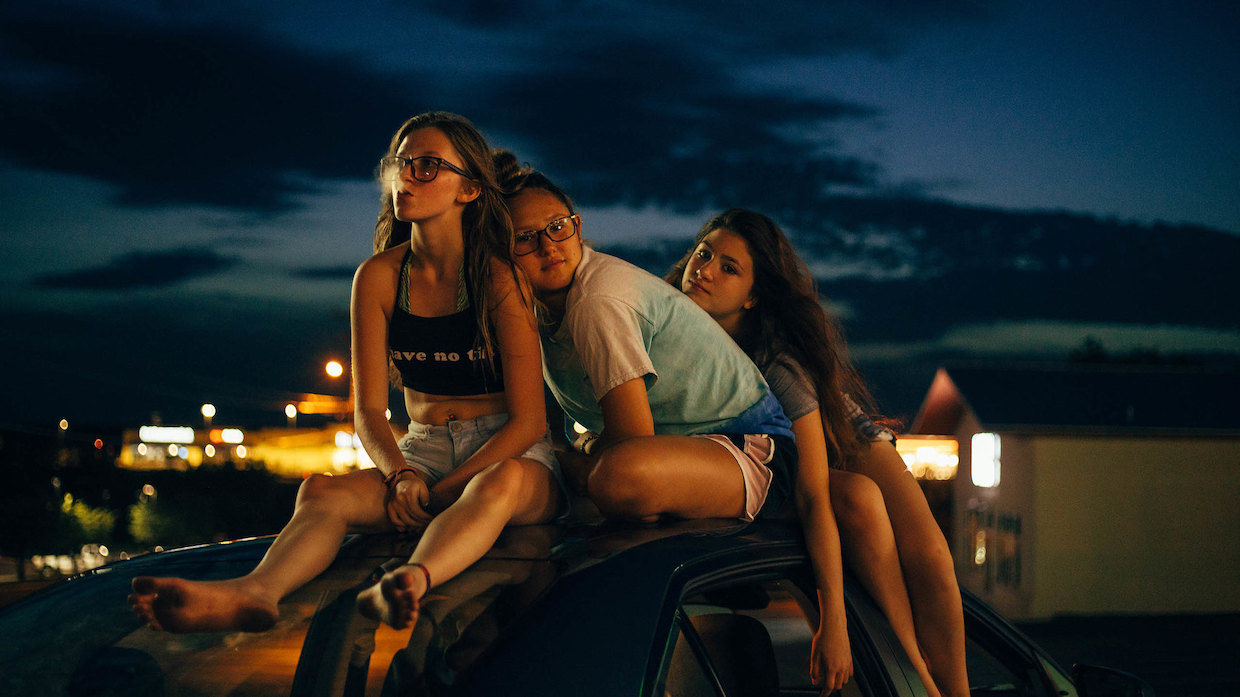 Parker Hill and Isabel Bethencourt’s Cusp embeds itself with a trio of teenage girls, all sustaining best friends, over the course of a long, alcohol-sodden rural Texas summer. Relationships come and go, but cycles of systemic sexual abuse and misogyny structure the lives of its indefatigable protagonists. As photographers, Hill and Bethencourt speak to acting as their own cinematographers, lighting from the Texas sun and capturing the textures of teen girl life.

Hill and Bethencourt: We met these girls as photographers, so as the project grew it was natural for us to co-shoot the feature. We both have an unlimited interest in framing their world, and would trade the camera back and forth between scenes. Whoever wasn’t holding the camera would record sound and shoot still photographs, which will be released as a photo book.

Hill and Bethencourt: We found ourselves immersed in the immensely rich world of teenage girls and their rural Texas setting. We wanted to capture their emotions and hardships in a way that felt true to them—moments of intensity or bleakness contrasted with their ever-changing attention spans and the vibrance of endless summer sunsets.

We wanted the film to pop, to grab you with color and take you down a wild ride of adolescence and to feel the colors and textures of being a teenage girl that we still remember from our childhoods. Luckily for us, the girls were their own best production designers, and their rooms were full of details and life that were endless sources of inspiration in how we approached the look of the film.

Hill and Bethencourt: There were a number of documentary and narrative film inspirations along the way, but we were particularly influenced by many incredible photographers who have an eye towards young women: notably Melissa Ann Pinney’s naturalism and intimacy, Justine Kurland’s precise framing, and Lauren Greenfield’s humor and love for details.

Hill and Bethencourt: Teenagers. In the summertime they wake up at 2pm and are up till 2am. So it’s safe to say natural light was a touch limited. We were just a two-person crew though, which probably was our biggest asset. We set your own rules, and could stay nimble around their schedules, their chores, and their bedrooms. Another challenge for us was that teenagers are spontaneous, and can never repeat their magic more than once. So we always had to be on, paying attention and ready
to record.

Hill and Bethencourt: Since we were the only two crew members telling an intimate story from within their world, we wanted to keep a small profile without sacrificing quality. We were also looking for a tool that would work well in low-light situations. We decided to shoot on a PL Canon C300 Mark II with Zeiss standard speed prime lenses. We fell for the textures and imperfections of the standard speeds, and the limitation of primes meant we were constantly moving around their rooms finding new frames and angles. 90% of the film was shot on a single 32mm standard speed, though a couple pickup trips we used an EF body and Canon glass.

Hill and Bethencourt: The big Texas sun. Our approach was to be as naturalisticas we could. It’s a verite doc, no expert interviews or formal sets, so we wanted the look to feel in-and-of their world. We were always on the lookout for the most cinematic lighting setup we could create naturally in the rooms we were in—tried to kill overhead lights and rely on lamps or Christmas lights, and opened curtains as much as possible.

We never wanted to bend reality, but amplify the best version of itself. Always looking to lean in to how the girls live
themselves, especially at night. So much of the film takes place at night, so we tried to enhance what’s normally lighting them like cellphone lights, fire light, blue from a nearby TV, etc.

We also designed a little secret weapon to help out in the pitch black—Parker bought a pack of cheap plastic color filters online,
and we would tape them to Walmart flashlights to make a colored light we could carry around in our pockets for nighttime shooting—always trying to keep that teenage color palette with us.

Hill and Bethencourt: The most difficult scenes to shoot were always also the most emotional. Autumn’s breakup scene at the lake was particularly hard—when a girl you’ve gotten to know so well is shaking and crying in front of you, it’s hard not to put the camera down and console her. But in the moment you have to remind yourself to focus on the story, fix your frame, check your levels, and give her a big hug after you cut.

Hill and Bethencourt: Quite a bit of our look was baked in—on top of our standard speed lenses, we used Tiffen color filters to enhance the golden warmth of the Texas summer sun. We also used various hues of pink and blue filters for some of the twilight scenes. We knew the incredible low-light capabilities of the C300, but wanted to really create a look with the way we captured daylight, and limit the colors that were baked in to the “negative.”  Once we got to the color grade, we just got to have a blast! We worked with Parker’s longtime collaborator, Andrew Francis. He’s incredibly talented, and we were able to bring out more complexity and richness in the story than we even thought was possible.