The Other Horror in Zombie Movies 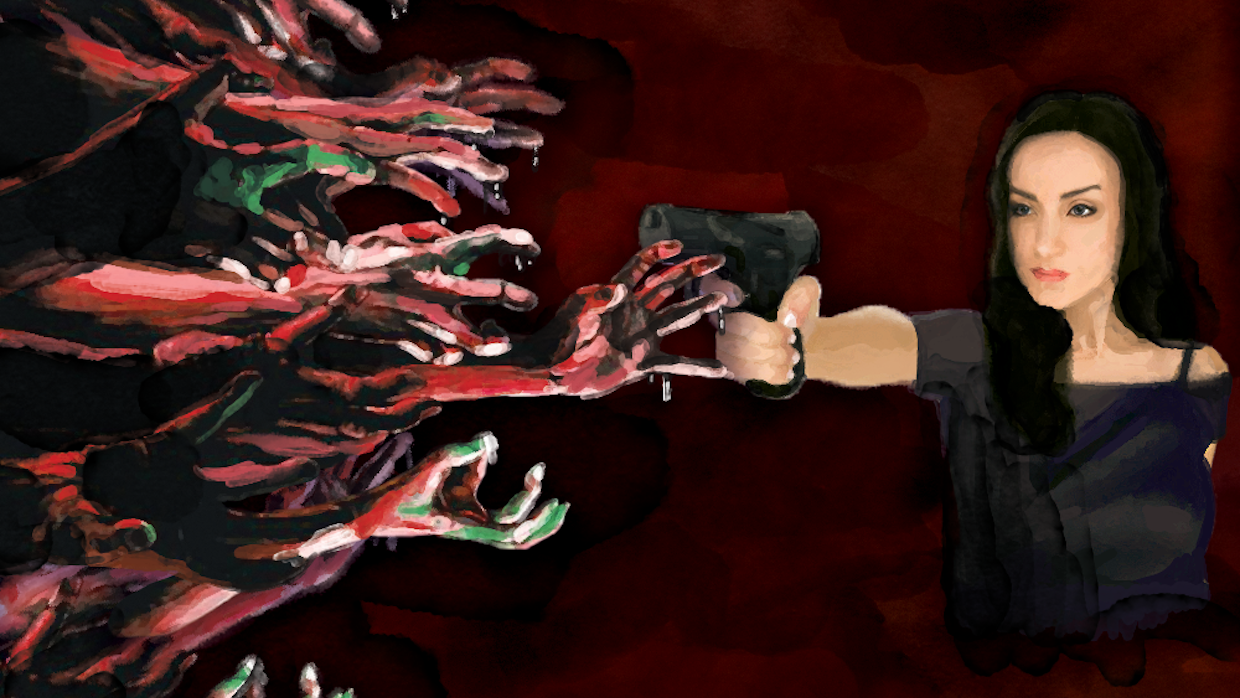 The asymmetries of combat in a zombie movie are unlike any other: One must shoot to kill because only one side fights—the other side is merely hungry. The fate of humanity hinges on an efficiently delivered death blow. Characters can outrun the monsters or grab a knife in the kitchen for self-defense. Or, if the movie was made in America, there’s probably a gun. Only one side can handle tools.

It is right there on the movie posters in which actors typically appear with their primary weapons. Brad Pitt has an assault rifle on the World War Z (2013) poster, while Martin Freeman is photographed with a walking stick on the poster for Cargo (2017), an Australian movie. The lead character has an oar and nunchucks on the poster for the 2011 Cuban zombie movie Juan of the Dead. Jesse Eisenberg and Woody Harrelson are photographed with long guns for Zombieland (2009). In the poster for Anna and the Apocalypse (2017), filmed in the UK, the protagonist wields an oversized candy cane because it’s also a Christmas movie.

I began to notice how weapons figure into zombie movies after I stumbled upon a website called IMFDB (Internet Movie Firearms Database), a classic hypertext wiki with articles organized by movie and by gun. Its collaborators are a gearheaded community with the kind of obsessiveness over specs and features that one might find in forum threads on analog synthesizer parts or rare sneaker colorways. In the “talk” section, users debate things like whether a weapon that has to be cleaned frequently was a wise choice for an elaborate fight sequence. The “Zombie” category is one of the most populated pages on the website (granted, its definition is expansive and includes films like Ken Russell’s Lisztomania (1975) and video games—usually first-person shooters). Entries for movies like World War Z and television shows like The Walking Dead are lengthy and thorough. I now recognize the weapon that Pitt carries in the World War Z promotional image as a M4A1 carbine with M203 grenade launcher.

World War Z begins with chaos and wreckage in downtown Philadelphia. Amidst the first zombie attacks, Pitt’s character Gerry has the good fortune to come upon an abandoned RV with a hunting rifle inside. He drives his family to a crowded supermarket in Newark as it is being looted. At first, it looks like Gerry is the only person who is armed, but in the pharmacy section, he comes across another man with his Glock. There’s tacit respect exchanged between the two as men defending their families. In one of the aisles, a man with a Sig Sauer P229 attacks Gerry’s wife, and Gerry fires his newly acquired Remington Model 700. (Later, he will tape a kitchen knife to its barrel as a “makeshift bayonet”—a detail I missed until I read the IMFDB notes.) A police officer arrives on the scene, and Gerry waves his weapon to surrender. But the officer is there to grab canned goods, too; we never see what weapon he’s carrying.

A scene like this wouldn’t make sense set in a country with restricted public access to firearms. Guns appear halfway into Cargo and 28 Days Later (2002). In both movies, the gun owners exploit the power imbalance that their weapons establish and serve as examples that not all warm bodies are to be trusted. Two zombie movies released last year, each based on the same script by Matt Naylor, unintentionally reveal how firearms are perceived in the States and abroad. In Alone, set in Los Angeles, the lead character casually finds a shotgun outside his apartment. In #Alive, Cho Il-hyung’s adaptation of the same script, made in South Korea, the shotgun has been changed to a revolver that a police officer dropped. The character who finds it feels remorse about using it.

Guns as props have an oversized significance in action and horror filmmaking and shape how these stories are told. When a gun is introduced, specific decisions are made in blocking and the composition of shot. Characters stand differently when they attack the zombies with garbage pail lids or pieces of furniture. Train to Busan (2016), which—like most international zombie movies—rates only a thin entry on IMFDB, creates suspense out of the absence of weapons. Instead of assault rifles and cowboy confidence, the characters work with the architecture of the train. They dodge and corral zombies behind gangway doors or ward them off in seat aisles, restrooms and baggage areas.

The central idea in zombie stories—a fate worse than death—comes from Haitian folklore at the end of French colonial rule. Golem narratives and Frankenstein’s monster also exerted an influence. Mid-century science fiction novels like Richard Matheson’s I Am Legend and John Wyndham’s The Day of the Triffids suggested what the fallout might be like: pandemonium and deserted cities. (The Walking Dead and 28 Days Later both began with a character waking up in the hospital, as Wyndham’s main character had.) Owing to George Romero’s influence, zombies often would be depicted as rabid cannibals. They conjured up visions of societal collapse, fear of mortality, chaos and hell on earth. Since Night of the Living Dead, American gun culture and its absence also made a mark. The extreme scenario of the 1968 film extricated it from a key part of the rhetoric around gun ownership: protection against the state. There is no coordination to these mobs of out-of-control human bodies. As a visual, the closest real-world counterpart to humans gunning down zombies is a mass shooting.

What once appeared to be a trend never went away, and now the zombie genre is in a self-referential stage. Characters in Train to Busan and in novels like Paul Tremblay’s Survivor Song (2020) use the word “zombie” to describe the horrors unfolding in front of them. In Warm Bodies (2013), a living dead character played by Nicholas Hoult poses next to a DVD of Lucio Fulci’s Zombie. But I’ve yet to see an American zombie movie deliberately challenge how firearms are represented in these stories. Even the comedy Zombieland chooses to satirize zombie tropes rather than the notions of meritocracy that gun-nut survivalists cling to (“The first ones to go were the fatties,” Jesse Eisenberg’s character declares in the voice-over narration. No wonder the NRA’s consumer magazine, American Rifleman, named it as one of its favorite movies in 2013).

Zombies are used as mock threats in real-world emergency response training. They are also common target practice at firing ranges. In Las Vegas, there’s even a “zombie hunt” package, complete with M4s and Glocks. Come to think of it, a zombie might be the perfect target for the times. It offers us the fantasy of a perfect shot and no victim.