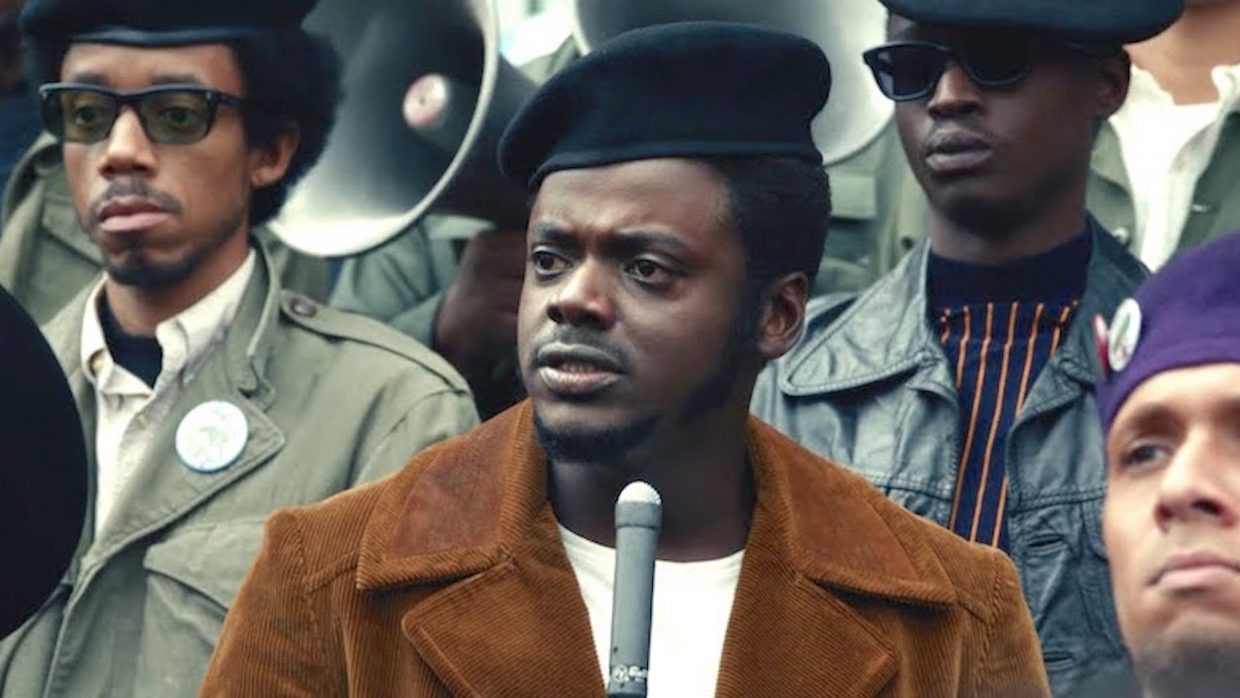 Judas and the Black Messiah

One of the best American films of recent years drops on HBOMax (and on big screens where theatres are open) today with the release of director Shaka King’s mesmerizing Judas and the Black Messiah, a film about slain Black Panther leader Fred Hampton that skillfully avoids bio-pic cliches with its sophisticated dual narrative and arresting ’70s crime flick style. Daniel Kaluuya is the best he’s ever been in a performance that forcefully conveys Hampton’s iconic power and humanizes him at the same time; costar Lakeith Stanfield is equally strong as William O’Neal, an FBI informant who sells out Hampton and the civil rights movement as a whole to stay out of jail after he’s arrested for car theft and impersonating a federal officer. King deftly interweaves Hampton and O’Neal’s stories and fills them with rigorously researched anthropological detail; the tenor of the period is expertly captured by a top-notch team of collaborators that includes cinematographer Sean Bobbitt, production designer Sam Lisenco, and costume designer Charlese Antoinette Jones, all of whom trace the characters’ psychological and social trajectories through a meticulously designed progression of expressive light and color. While the focus is on Hampton and O’Neal, King’s script (cowritten with Will Berson, Keith Lucas, and Kenneth Lucas) is ambitious enough to encompass a multitude of perspectives and issues, resulting in an intimate spectacle that earns comparisons with the likes of The Last Emperor and Malcolm X. Yet for all its value as history and political commentary, what really makes Judas and the Black Messiah crackle is a kinetic approach that treats the material as the stuff of a high-intensity thriller; the result is a great American epic, a devastating tragedy, and a riveting action flick all in one.

Speaking of riveting action flicks, director William Lustig’s grindhouse classic Vigilante is newly available in a 4K/Blu-ray combo pack from Blue Underground that is essential viewing not just for the movie itself – a dazzling riff on Death Wish and Italian poliziotteschi films – but also for the six hours’ worth of extra features that are packed with instructive war stories from the battleground of guerilla filmmaking. Lustig was one of the greats when it comes to low-budget ingenuity, and since he also happens to be a lively storyteller Vigilante’s two audio commentaries (featuring Lustig with various collaborators) are a treasure trove of hilarious lessons in making the most of limited resources and bending – sometimes obliterating – the rules in order to get a film finished. A third commentary track with film historians Troy Howarth and Nathaniel Thompson is equally strong, filled with jaw-dropping revelations that go down some intriguing true crime rabbit holes. (Just one fascinating story: technical advisor Randy Jurgensen, who plays a small role in Vigilante, was one of the loose models for Al Pacino’s character in William Friedkin’s Cruising, and in a wild coincidence, a murderer implicated in the case on which that film was based played a radiologist in Friedkin’s The Exorcist!) In addition to the commentaries, the Blue Underground release includes a wealth of promotional materials and a pair of great documentaries on the film’s making and its score, giving the viewer a crash course in New York’s independent genre scene in the early 1980s. It’s a total delight, and the film has been lovingly upgraded in all its grimy glory.

My final recommendation this week is Kino Lorber and Scorpion Releasing’s Blu-ray of another great independent genre picture, the 1977 Canadian horror film Rituals. The story of five doctors who go on a camping trip and find themselves hunted by a crazed killer in the woods, Rituals is one of the many male-driven wilderness thrillers that emerged in the wake of Deliverance’s success; it’s also one of the best, right up there with Hunter’s Blood and Walter Hill’s Southern Comfort. Rituals eschews the social subtext of those films, which are largely about class warfare or, as in the case of Hill’s movie, allegories for larger political conflicts like Vietnam. As scripted by Ian Sutherland and directed by Peter Carter, Rituals is a lean, mean portrait of men breaking under pressure; as their unseen assailant picks them off one by one, the friends’ suppressed neuroses and weaknesses bubble up to the surface, with their demise caused as much by their own panic as by the external threat stalking them in the woods. The movie was a passion project for co-star Lawrence Dane, who produced it and wisely populated it with skilled character actors like Hal Holbrook, thus elevating a Friday the 13th-esque body count flick to something both more thoughtful and more disturbing. Not that Rituals fails to deliver the slasher movie goods – the special effects makeup is by Friday the 13th Part 2 & 3’s Carl Fullerton, and the set pieces are as horrifying as the dramatic scenes are penetrating. Scorpion’s Blu-ray contains interviews with Dane and fellow actor Robin Gammell, as well as an excellent commentary track with Dane moderated by filmmaker Lee Christian.