“Those Years of Ecological Collapse and Pandemics”: Visions du Réel 2021 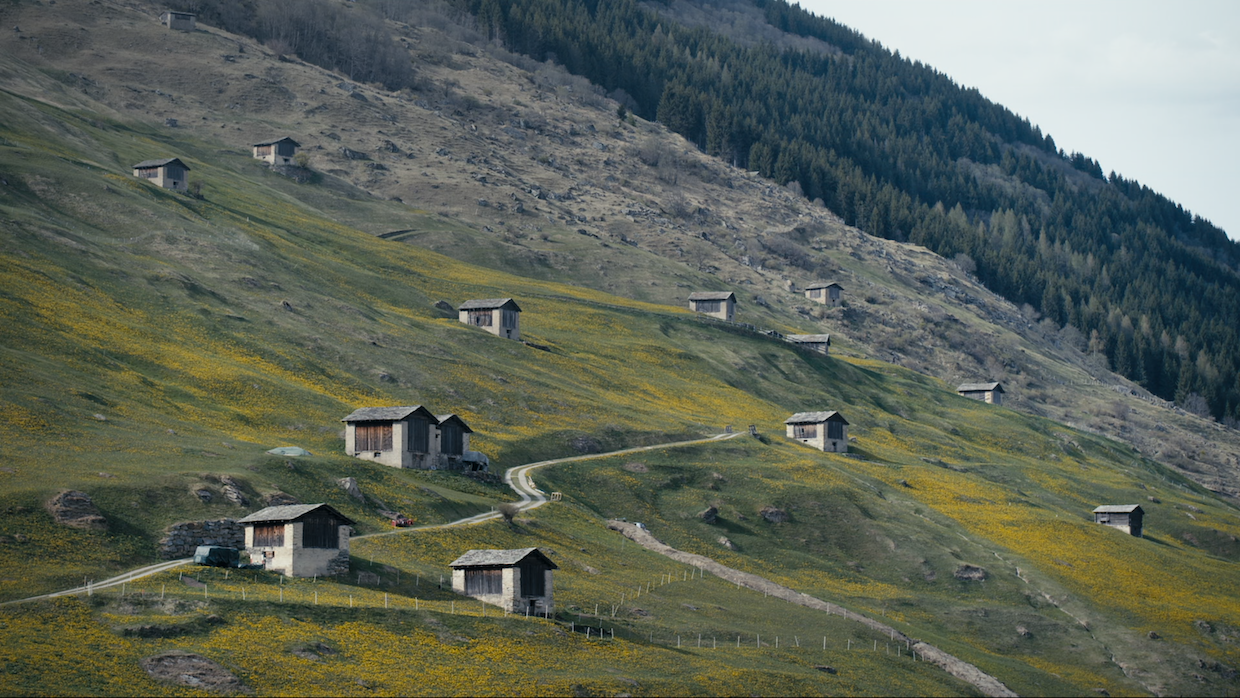 Kind Regards From the Anthropocene

Last April, the opportunity to scope out Visions du Réel—a festival I’d never had the budget to attend in-person—came as a novel, welcome distraction. A year later, NYC’s weather is increasingly tolerable and the CDC says I’m ready to roam, but I enjoyed having the hybrid festival option once again on my way out the door; two years of browsing VdR have definitely expanded my understanding of global nonfiction norms, and I’d cheerfully make time at home for the rest in a re-opened world. Amid the films in this year’s lineup, one title, Kind Regards From the Anthropocene, pops out as almost comically of the moment. Lucas Ackermann’s 14-minute short is a low-key reckoning with climate change and the continuing dissolution of landscapes. Four young Swiss people seem almost cheerful as they wander the countryside and reckon with what’s already happening. “I don’t know what the apocalypse looks like,” one says, sitting in a rocking chair and smiling beatifically, “but I hope that humans won’t stay till the end when everything else dies. That humans instead leave at some point and the rest somehow lives on.” That hope has a very good chance of being realized; sometimes it’s hard not to think of movies made now/going forward as archives intended, per the end of A.I., for future alien/robot visitors wanting to understand what happened.

Structured as a lecture delivered decades from now about a never-completed 2018 film, León Siminiani’s The Stillness Syndrome addresses the even more immediate moment—unlike last year’s Visions, pandemic-era titles are in the mix. A crisply impersonal English-language narrator explains how the unfinished movie’s “dystopic premise” was “something very common in those years of ecological collapse and pandemics” (note the alarming plural on the latter): one morning Bogotá wakes up silent, its streets deserted, with no big soccer game to explain the quiet, the metaphorical starting point for an inquiry into Colombian 20th century political history, contemplations of the national character et al.. A repeated formal conceit lays out the editing timelines as a kind of Chuck Close landscape, with a dark patch in the middle where shooting stopped. Repeatedly, a stable shot is suddenly frozen, has its background slightly pushed further back and then is reframed as the now non-existent camera “zooms out” to reveal the image’s place within the editorial timeline.

The film’s guiding spirit is Luis Ospina, who died in 2019 and whose pioneering mockumentaries are excerpted throughout. It’d be disingenuous to pretend I knew Ospina’s work before doing my homework for this year’s VdR; as preparation for Stillness, I watched his excellent 1977 The Vampires of Poverty. Co-directed with Carlos Mayolo, this short lives up to its blunt title—I wish I’d seen it at least a decade ago, as it would have immediately set my head straight on a lot of matters related to Ethics In Documentary Filmmaking. Vampires follows a feckless crew out in search of urban poverty and dispossession, to be shot for German TV and the cluck-clucking of well-meaning foreigners—in this case, though, the self-aware subjects, aware they won’t see any of the resulting revenue, shoot back. Ospina is on hand to discuss his work and thoughts on Colombia, and the film’s from-the-future perspective allows it to imagine a happy ending—a post-pandemic reunion between this collective of filmmakers and a still-alive Ospina in 2024 to realize a long-time dream art project of his.

Ospina also tips off Siminiani’s crew to footage shot by a filmmaker friend on October 24, 1993, when a national census was conducted in the urban parts of Colombia. To ensure an accurate count, everyone in Bogotá stayed home that day—a show of citizenship for the greater good impossible to imagine in the United States, where no doubt self-styled Patriots would roam the streets, probably openly armed, on some imaginary principle of freedom or other. Stillness connects this VHS footage to more recent, pre-pandemic shots of Bogotá on empty soccer mornings and, inevitably, eerie stills of deserted quarantine streets—the filmmakers can’t ignore the inadvertent prescience of this archival discovery from 2018 and make the logical, unhappy connection. (Shades of Cameron Crowe recalling, last summer, shooting an empty Times Square for Vanilla Sky: “We were told so often when it happened, ‘Take a good look. This will never happen again.’”) Stillness Syndrome is honest and non-overbearing in reconciling a project conceived with an entirely different intent with a historical moment it had no choice but to incorporate—after the final episode of How to With John Wilson, it’s the most successful head-on confrontation with the last year I’ve seen so far.

In Nikita Yefimov’s Strict Regime, the filmmaker, having somehow finagled access to a St. Petersburg penal colony, is shown around by the facility’s top commander, Alexei Doronin, another self-aware doc subject who wants “the truth” onscreen. He notes that he once watched an investigative TV report in which a “well-known journalist” still found herself being deceived in what she observed and presented. Doronin is not going to let that happen to Yefimov, but his truth—a patriarchally benevolent, tough but fair supervisor beloved by his charges—is, inevitably, not what comes across. Prisoners ask about parole procedures, then are told by Doronin to come back in and ask the questions phrased as he proscribes: it’s the subject, not the filmmaker, who’s (unsuccessfully) manipulating the POV. When someone invites you in to watch them hang themselves at great length, take the invitation—Strict Regime is grimly funny in all the ways you might expect. The minor twist is that Yefimov’s presence actually seems to make his subjects’ lives briefly better: they’re relaxing in the face of camera-ready, better-than-usual treatment, as when encouraged to stop work and play dominoes for Yefimov’s camera. This is confidently shot, eminently satisfying, darkly humorous verite, like a more benevolent, less austerely removed Ulrich Seidl.

Natalia Garayalde’s Splinters digs into a family archive seemingly as extensive as the home movies Jonathan Caouette drew on for Tarnation. A ’90s kid with a camcorder, Garayalde spends the first ten minutes or so reconstructing a close-enough-to-idyllic childhood in Rio Tercero, Argentina. This opening footage has its inherent textural fascinations, both domestically and in its views of a little-documented (to my knowledge, anyway) city with a munitions warehouse no one had ever thought to worry about much. In 1995, said warehouse exploded, raining shells over the city, many of which detonated upon impact. Garayalde was at school with her brother; a stranger packed them in his car and drove as fast as possible from the city center. It’s not clear whether the footage of this event, captured with an unbelievably steady war cameraman’s adrenalized unflappability, was shot by Garayalde or someone else—early on, the editing handoffs make clear that her family footage is just one source of many. The authorship question’s irrelevant: the car glides through increasing chaos, from smoky suburbs round corners where more and more panicked citizens climb over fences, running on instinct to get to safety, however far that might be. Already mobile within the vehicle, the camera pans with shocking fluidity, and the result is like a very real-world version of similar, 9/11-invoking crowd chaos scenes in War of the Worlds. I admire this footage almost as much as I wish it didn’t exist.

The guilty spectacle of this nerve-wracking sustained sequence inevitably overshadows everything that follows. Garayalde’s footage of subsequent days (shells the government never bothered to collect started exploding again three weeks later) is strongest in candid views of her and her siblings, with the unflappable flipness of children still young enough to feel untouchable; playing at news reporter while interviewing her mom about what happened, Garayalde is unbelievably cheerful. It took years for the full damage to become clear: the government’s claim of an accidental explosion turned out to be as corruptly, nightmarishly untrue as imaginable. Whether home movies or unedited footage from local news stations, all the footage has the same textural quality until Garayalde jumps to the digitally glossy present in the final minutes, and the results are something like Collective’s longform investigation of national corruption merged with the you-are-there-watching-raw-feed quality of Harun Farocki and Andrei Ujică’s Videograms of the Revolution. Garayalde’s film is slacker than either; even at 69 minutes, it feels padded to feature length, though not cynically—whatever torpors are here, they’re organic rather than examples of focus-tested, machine-tooled “good storytelling practices.” But for that astonishing, literally explosive inciting incident, Splinters is worth seeing.

The most exciting and unexpected thing I found in the lineup was Isabelle Prim’s 20-minute, slightly indescribable Condition d’élévation. Prim has been making films since 2010, and her bio says she’s acted for Luc Moullet, but her name is entirely new to me. Primarily assembled from repurposed French industrial films, including surprisingly hypnotic footage of polyurethane manufacturing, Condition dubs a complicated plot on top. In voiceover, a woman monologues about her complicated relationship to polyurethane and hot air balloon exploration as she prepares to make another voyage up; a long-ago voyage led her to see something like a UFO, and curiosity is bringing her back up. The wild narrative unpredictably soars upward to this moment of re-reckoning before bumping against an abrupt, completely unexpected ending—it’s bracing and wild, exactly the kind of easily overlooked work I’d hate to miss out on going forward.