The Past Inside the Present: Jia Zhangke on Swimming Out Till the Sea Turns Blue 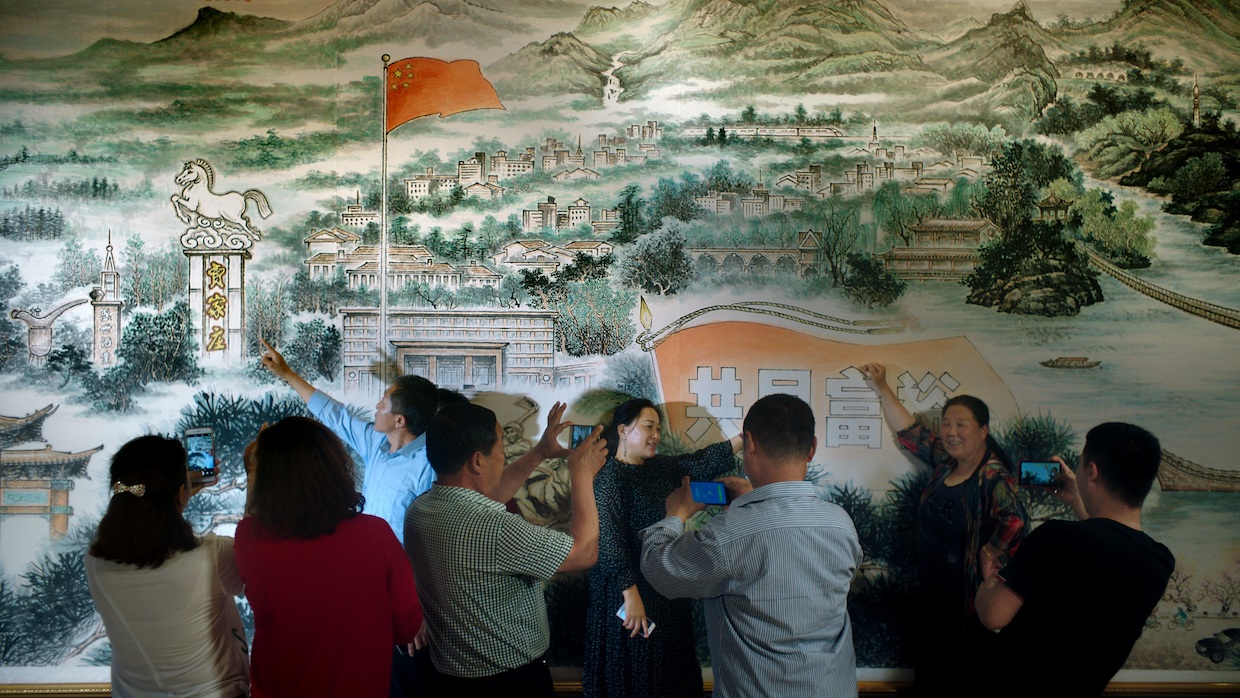 Swimming Out Till the Sea Turns Blue

by Forrest Cardamenis
in Directors, Interviews
on May 26, 2021

Jia Zhangke, Swimming Out Till the Sea Turns Blue

With each new film, be it fiction or documentary, Jia Zhangke reasserts his status as one of the keenest chroniclers of China’s unprecedented—and unending—transformation. His latest, Swimming Out Till the Sea Turns Blue, serves as a reminder that he is not alone on his mission. The documentary consists largely of interviews with three of China’s most important authors (plus the bereaved daughter of a fourth), whose reflections on how their artistry intersects with national history echo the social commentary resounding throughout Jia’s own work. Indeed, their words could just as well be Jia’s own, serving almost as a mission statement for an oeuvre undergirded by the histories and rapid pace of change the interviewees aptly capture. At one point, Jia even includes footage from his own Platform, as if to demonstrate how his own films serve as a time capsule.

That’s not to say that Jia’s latest is merely a simplified distillation of his recurring themes; on the contrary, it also charts new territory for the director, including a surprising reliance on classical music. Swimming Out isn’t just talking heads, either. Authors’ monologues are broken up across different locations, both interiors and exteriors, as a constant reminder of what is at stake, and the film’s 18-chapter structure—at times punctuated by rural portraiture and a handful of quotes—enables a great degree of aesthetic variance, as in one sequence (discussed below) when Jia juxtaposes a series of speakers with a wordless train journey.

With the assistance of a translator, Filmmaker was able to speak with Jia on the occasion of Swimming Out’s impending release, where his expressions of hope in his film’s ability to reinvigorate his fellow citizens’ interest in family histories as well as his declarations of artists’ unique ability to connect past and present revealed a filmmaker as impassioned by the world around him as by his way of looking at it.

Filmmaker: This film has been referred to as part of a trilogy about artists with 2006’s Dong and 2007’s Useless. Were those two films on your mind as you were making this one?

Jia: Yes, actually, I pretty much positioned this particular film as one of this so-called trilogy of artists, starting in 2006 with [painter] Liu Xiaodong in 2006’s Dong to the designer Ma Ke in Useless to this one, where I very much wanted to capture the expression of either artists or writers. In this case I chose writers, because they are keen observers of our society and have very very expressive storytelling powers. And for me, in order to really capture what has happened in the past 70 years of this dramatic transformation of society—people migrating from the rural areas to the urban cities, the dramatic development of urbanization in China—and what’s been left behind in terms of ways of life, histories and the past. That past has very much have been forgotten by the younger generation growing up in urban settings. I thought the best way to tease that out was to collaborate with authors who have been, in their stories, focusing on and showcasing rural life, rural characters, the rural experience, the rural histories. I use them almost like a relay, one-by-one, generation by generation, to recount the past 70 years from their perspectives as writers and as storytellers.

Another reason I really want to use these three films through artists and literary figures is to share their stories in a way the audience can listen to. Because right now, I do see this trend in contemporary Chinese society where people tend to resort to escapism, to want to just escape and entertained without really listening to these keen observers and wonderful storytellers who are recounting the stories of the past, focusing on the realities and issues we experienced. These are very much what is missing in contemporary China, and I really want to use these films as a way to attract an audience and get people to listen again and really face what we have experienced so that we will not make the same mistakes again. That is very much why we made these three films.

Filmmaker: The authors you interview all chronicle an industrializing China from their hometowns; one even has ties to your home province. Do you see yourself, despite being a filmmaker rather than a novelist, as being part of their lineage and sharing in that same purpose?

Jia: Of the four authors that I capture in this particular film, the first, Ma Feng—who passed away, but his story is told through his daughter—was most prolific in the ’50s and ’60s and is one of the key figures of the Potato School [a literary movement of the era characterized by books written about and for rural peasantry]. We came from the same hometown, so he was very much part of my upbringing. Jia Pingwa is from Shaanxi province, Yu Hua is from the coastal area of Zhejiang province and Liang Hong is from Hunan province. So, out of the four authors, Ma Feng is the one I have the closest connection with.

I do think another reason I want to rely on these novelists is that they tend to see things in a more systematic, holistic and comprehensive way, at the level of the society that they are examining. With the internet, lot of information received now in contemporary China is very fractured. For me, in order to see things more clearly, you need to rely on novelists in order to take a very long look and systematic look at society. That’s also why it’s structured in such a way that there are 18 chapters. In fact each chapter can be a standalone film by itself, but I do think that in order for me to have this way of looking at what happened the past 70 years I need to rely on those 18 chapters in order to make this particular observation. As I mentioned, not fragmented, but more realistic and comprehensive.

Filmmaker: You’ve previously described the 18-chapter structure as being “quasi-musical,” and music features very prominently in the film as well. Can you talk about the place of music and your decision to use classical music?

That linear, chronological structure was the original concept. But editing the film, I started to realize there are common themes and issues and problems we have been dealing with in China that transcend this linear order. I found, thematically, that I can separate them into 18 different chapters, starting with Ma Feng talking through his daughter about the hunger we experienced in the ’50s and ’60s. It wasn’t until the ’80s that we solved the problem of not having enough food to eat or the problem of not being free to love—it was very much a traditional way of talking about marriage. During this juncture of our history we started to think about what it means to have the freedom to love and form the family and the marriage we choose, to choose whom we would like to spend the rest of our life with.

From there we go to Jia Pingwa, the second author, talking about how politics and society have a huge impact on the individual, especially during the Cultural Revolution. And the later authors talked about similar issues we have all experienced as Chinese people in the past 70 years. Through these commonalities and collective memories that we share, I can tease out those 18 chapters of different issues, and because of that structure—not just linear but thematic—and the universal, common issues we’re dealing with, it became very very abstract. This concept of abstraction is very much the reason I lifted musical elements from the symphony. Multiple chapters are like having multiple movements like Shostakovich’s symphony [no. 15], so using this particular symphony was a way to structure this film.

In my previous films I tend to use pop songs that almost are like a timestamp—you listen to them and they bring you back to that historical juncture. The reason I chose to use symphony rather than pop songs is because of the storytelling methods and subjects. [Pop songs] use words, so I thought a better way and a more abstract way to connect the different elements together was to use symphonies without any lyrics. That’s why I selected this way of structuring the film into 18 chapters.

Filmmaker: One sequence that really struck me is the fifth chapter, “Sound,” which is brief clips of various authors talking at the Literature Festival. You follow it with the chapter “Transit,” which is the opposite: a wordless look at people on trains and out train windows. Can you talk a little about constructing these sequences and their opposing approaches?

Jia: The reason why we have to look back to the past, to our memories, is because of what we are experiencing right now. That’s the reason I juxtaposed them back-to-back. In order for us to understand why we need to look back on painful history and memories, we have to also realize that those painful memories and histories have everything to do with what we are experiencing right now. Even though those authors were talking about the past in that sequence, they are situated within contemporary China. They are talking about the past because of what we experience now. Similarly, with those youth on the train, I’m trying to somehow make the connection that these are the exact same people the authors discuss that are now migrating from the rural area to the urban city. Very soon and very quickly, the younger generation will lose their connection to the rural culture and history they came from. I’m trying to use these two different elements together to show that in order for you to think about the past you need to position it within contemporary China, and vice-versa.

Filmmaker: I think that shows very clearly in the penultimate scene, when you talk to Liang Hong’s son. On the one hand he has these fancy headphones, but on the other he doesn’t know his native dialect. Is illustrating that connection between past and present also related to why you included shots from Platform in parts of the film?

Jia: Yes, I do think a lot of what we experience right now in urban settings has to do with how we have lived in the past in rural China. I do think urbanization is inevitable in China. Scores of people have left rural China for the urban cities and are starting to lose that spiritual connection with the rural environments. People in cities experience anxiety as a result of the resonance of what we experienced in the rural past—about hunger, about poverty. Not being able to eat and not having enough to eat still informs a sense of anxiety, even in urban settings in contemporary China. We’re still performing similar rituals in regards to eating and how we think about food. So, what I want to do with this particular film is allow the younger generations to use this film as a vehicle, as a tool, to start taking interest in their own family histories, hometowns and societal histories.