“I Like to Remind Myself that Creativity is Cyclical”: Molly Sorensen on Her Student Short Film Showcase Pic, Mud and Honey 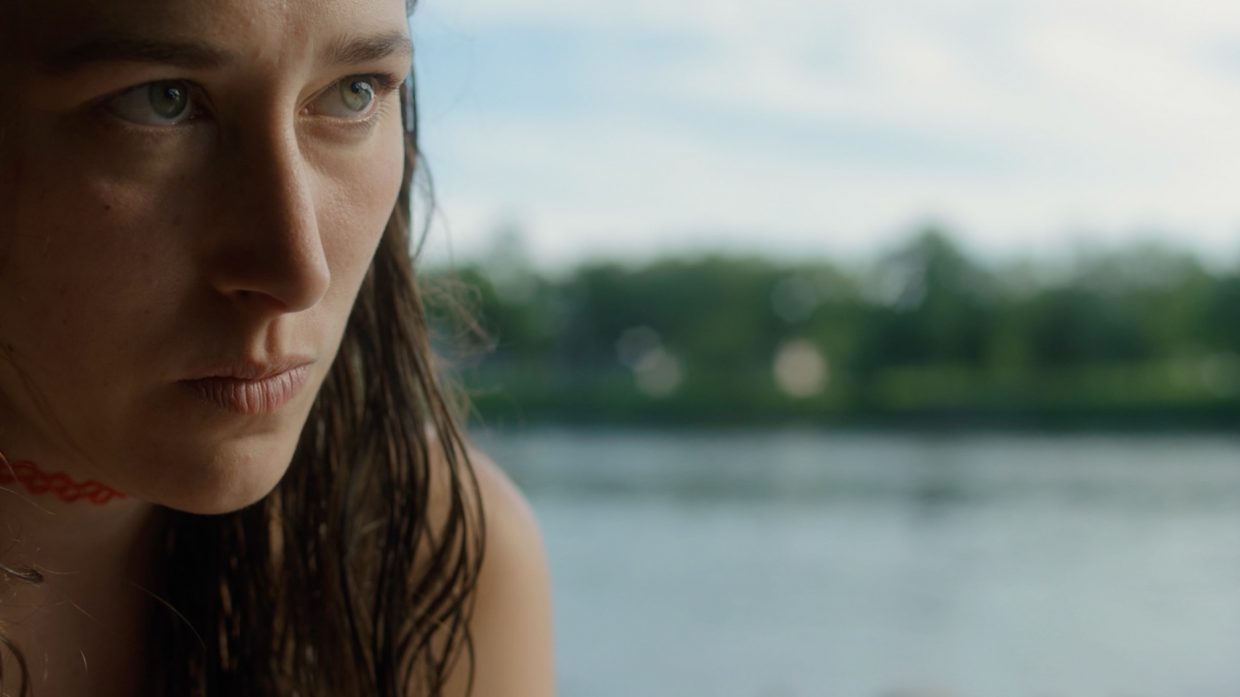 The sensations of summer — the heat, the mild ennui, but also the complicated feelings when teenage friendship and romance blur during those carefree months — are beautifully captured in Temple graduate Molly Sorensen’s short film, Mud and Honey. Maeve, a bit of a loner, seems sure of her sexuality but unsure if the object of her affection, Delilah, is sincere in her reciprocation. The popular Delilah, on the other hand, enjoys her languid afternoons with Maeve but could also easily spend them with a group of local boys. The tension between the two simmers in a film in which gesture, glance and the ambiguities of casual contact sketch an aching economy of desire — a journey that ends with one devastating shot. It’s one of five winners of the 2020-21 Student Short Film Showcase, a collaborative program from The Gotham, Focus Features, Jet Blue and the Westridge Foundation, currently available for viewing via Focus Features’s YouTube channel as well as in the air, on Jet Blue’s in-flight entertainment system.

Over email I spoke with Sorensen about working with her actors to sculpt such strong performances, how “The Girl from Ipanema” fit into the development process, and her advice to incoming film students.

Filmmaker: First, tell me what inspired this story and its characters?

Sorensen: Mud and Honey was the culmination of a lot of teenage angst. I tried to capture those seemingly endless summers spent dreaming of what life is like outside your small town. Our formative youth tends to stick with us whether we like it or not, and I wanted to focus on how achingly slow those years can feel. Especially during that time, identity and self-worth are so often caught up in other people. And for Maeve and Delilah, they are both desperately looking for something from each other that they aren’t getting other places. Delilah in particular was inspired by those people who come into your life, however briefly, and make you feel like you’re understood, you’re enough. But with that comes the power to take it all away. The story became a lot about who we spend time with when we’re at our lowest, and how painful it can be if you let too much ride on someone else’s actions. A sort of “she loves me, she loves me not,” “how close is too close” kind of thing. It also deals with both of them digging their sexual identities out from under a lot of baggage and the side effects that come along with that. At some point it all boils over, and a lot of the story was inspired by those dark days and the strange longing to feel that intensely again.

Filmmaker: Tell me about casting your two lead actors and how you approached capturing the arc of the characters’ relationship, which is conveyed with such subtlety. Was there much rehearsal? What was important to find in these actors when it comes to telling this story?

Sorensen: The film was almost made a year earlier, and looking back I’m so happy we waited. It gave me the time to really flesh out the characters and explore their worlds. Ximena LaMadrid (Delilah) had auditioned the first time, and the tape stuck with me. So a year later I lucked out that she was still local, available and interested. We met and instantly clicked. She has this combination of an incredible lightness about her, while still being able to appreciate and connect to the darker parts of a character.

From there, we brought in so many promising people and had Ximena read with them. The character Maeve was really personal for me so it felt like a heavy decision. The sides they read had minimal dialogue because I wanted to see how they were in the moments in between. First and foremost there had to be chemistry and an understanding of the nuances of the relationship. Maeve and Delilah have a sort of “opposite forces but also borderline co-dependent” dynamic, so they needed an instant level of comfort but also the potential for tension. Sam Quartin, who we ended up casting as Maeve, brought that subtle naturalism I was looking for. She has a quiet strength to her acting that I find to be really striking.
I recently watched the audition tape of them reading together and it makes me feel lucky all over again. After the readings, I asked Ximena’s take on each person. There were positive things about everyone, but she was so confident with Sam. They played off of each other instantly. I looked back at my notes from the audition and during their reading I wrote, “This is it!”

Overall, we had a really special experience. We went to my childhood home (where a lot of the film was shot) for rehearsals, and I really bared my soul to them. And they matched that and more. Honestly, everything a first time director could hope for; they were receptive, brought their own nuances to the table, and were genuinely invested in the story. I’m so grateful to have had Sam and Ximena on board. We still keep in touch, and I’m always happy to see all of their successes and adventures.

Filmmaker: What references or influences, whether those are film or from painting, photography or literature, did you look towards in terms of the way you approached your storytelling?

The first projects I ever made all involved poetry. I was so attracted to that form of expression and what it could elicit, and so I tried my best to make Mud and Honey a film poem in a narrative package. I read a lot of poetry that deals with drawing parallels between nature and the human body. For that reason, I’m always inspired by filmmakers who can say so much with small details. Lynne Ramsay comes to mind because she uses parallel imagery in such a genius way. And Claudia Llosa also has an incredible sense for composition and timing. Her film La Teta Asustada is absolutely haunting and it has everything to do with what she chooses to show and not show. Some of my favorite moments from both Llosa and Ramsay will just be a shot of an eye, or half of someone’s face, or a hand. These sort of severed shots that are intentionally disorienting. That sort of control, mixed with a little darkness in tone is just magic to me. I’m a big fan of films that are driven by that sort of poetic delicacy.

Music was also a factor in the process. I made playlists that I thought each character would be listening to and one that overall just fit the world. I listened to a ton of bossa nova and probably played the song “The Girl from Ipanema” by Getz/Gilberto thousands of times over the course of making this film. I love the pacing and the romance of the genre, and it still just brings me right back into that world of a sort of languid summer gone awry.

Filmmaker: You recently completed your MFA at Temple. Now that you have graduated, what are your retrospective thoughts on your film school education, and how has it prepared you for post-university life? What path are you currently pursuing when it comes to making more work?

Sorensen: Going to film school taught me about the value of collaboration and community when it comes to making work. You’re in a little bubble surrounded by all of these incredibly talented people, all the while being encouraged to spend time crafting your voice. There are some amazing people at Temple coming from all different corners of life, and to be a witness to those voices forming made me feel lucky. It’s a really special support system, and it can be difficult to find and foster that again when it’s over. A big takeaway for me was realizing the importance of working toward more honest and more prevalent representation for marginalized communities.

I like to remind myself that creativity is cyclical, and to be forgiving with yourself during the process. That being said, little practices help keep up the momentum. And keeping connections from other projects and festivals has proven helpful as a reminder to continue making work and support others who are doing so. I’m currently revisiting a script that never came to fruition and trying to participate in some story labs to get back into that world. It’s a bit darker and deals with a sort of one-woman apocalypse. I’m looking forward to getting some traction and sharing the story!

Sorensen: As far as advice, watch as many short films as possible. There are so many that are widely available. Pick a director you really admire and watch all of their early work. And write down what sticks with you about it. Structure is delicate in a short, and it’s fascinating to see where people got their start.

I find the short form to be incredibly charming. One of my favorite professors used to tell us that a good short can be one act of a feature, a slice of a bigger story. I think I clung to that because it allowed me to put time into world-building and just pluck out the portion I wanted to tell once the world existed in my mind. This can be especially useful for creating depth in characters, to imagine an entire life for them outside of the short film. I love shorts because you don’t have the space of a feature to create a rapport with the audience, so it’s a challenge to show instead of tell.

Making Mud and Honey was a learning experience for me as a director, and it can be terrifying to hand over control of something that means a lot to you. But therein lies the beauty of the collaborative process. I was incredibly lucky to have a lot of talented people decide that the project was worthwhile and take stock in it. I’ll always be grateful for them pulling me out of my own head. Trust the process!