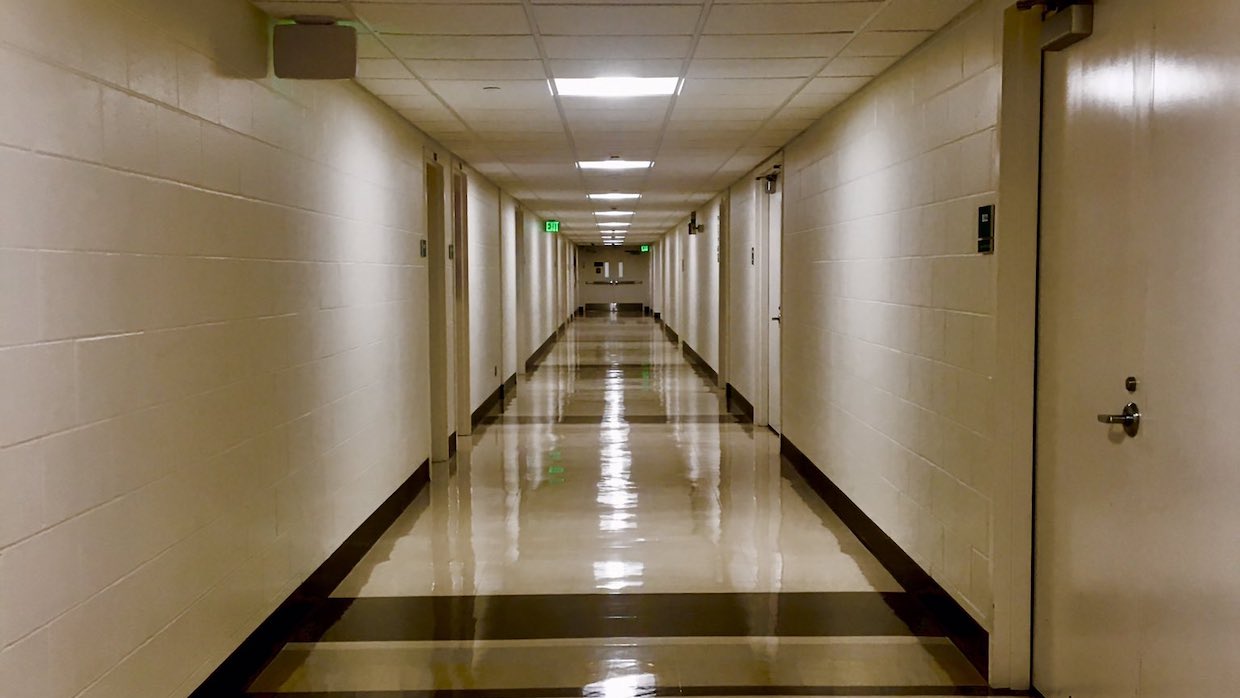 1. After 15 months in pandemic NYC, with no trip out of town longer than six hours during that time, it was imperative to leave and go elsewhere—anywhere—as soon as possible. The easiest way to do this was to pay a visit to James Hansen, a friend who teaches experimental film at Alfred University, logically located in the previously-unknown-to-me town of Alfred, NY. Getting to Alfred, however, is not super simple, so I needed a ride to get from the halfway point of Binghamton to my final destination. Because I try to maximize the value of every visit I take, it then seemed only logical to use this visit to see the hallway Ernie Gehr transformed into stroboscopic magic in 1970’s Serene Velocity, shot while he taught at SUNY Binghamton.

2. If I were to show someone who’d never seen an experimental film just one as an intro, it might well be Serene Velocity which, despite its conceptual rigor, isn’t really an intellectual experience, more something that’ll blast your eyelids out. By filming in a hallway with multiple lenses. Gehr creates the illusion of almost simultaneously traveling forwards and backwards in space even as the camera itself doesn’t move. The feeling is of constant movement without actually going anywhere (meaning it’s a perfect pandemic movie) from the most unpromising of starting points; as Scott Macdonald wrote in 1990, “Gehr is able to energize one of the dullest contemporary spaces (what is duller than an institutional hallway?).” I have a deep aversion to, and horror of, academia, but also effectively grew up on the UT-Austin campus, where my mom taught until quite recently, so these types of spaces have a fascination for me. So yes: I wanted to see this hallway.

James made the appropriate inquiries, and in due time instructions arrived from SUNY Binghamton’s Brian Murphy:

The red line Starts at Rt434 or otherwise known as the Vestal Parkway and the main entrance to campus. […] The Door you want to go in is in the corner of the Classroom wing Building, this is next to a small parking lot with a loading dock. Go in the door and directly to your left will be a door to a stairwell down. Go down the stairs and through the door and turn to your left.
Then behold the Serene Velocity Hallway.

I believe B-32 is the room video art began in Binghamton, via Ralph Hocking, the Experimental Television Center was given birth there, seminal, visionary.

Also B-32 and the Hallway were home base, two years of filming and editing for the “We Can’t Go Home [Again]”, the Nicholas Ray and student film. […] Once while filming WCGHA, in the Hallway , we needed more electricity. We somehow were able to open the door to the room across from B-32 and access their precious AC outlets. The room was the property of the Anthropology Department, not the Cinema Department. On opening the door this is what I saw. On several tables, laid out, I discovered, it was 1:00am, were three or four dried out human bodies, wrapped in very old rope twine. There were more bodies in drawers surrounding the room. The bodies had been exhumed during a construction pause on the building of Route 17 at the time. They were native Indian people who had lived and were buried in what is now Nichols, NY, just past Owego. Sometime later I acquired a small publication of the excavation documentation. What a surprise. Everyone came to take a look and feel the overwhelming uncanny moment reality. Wow. Then we went on to a number of additional hours of multiple set ups and filming, filming, filming.

Also, of course, there were fights in that HALLway also.  Fun fights. Filmmakers are a passionate people tribe.

4. As experimental filmmaker Chris Kennedy tweeted, “The funny thing about that hallway is it looks bland by eye until you take a photograph of it and then it truly becomes THAT hallway.” This is exactly right, although I’m not sure what I expected (a hallway is a hallway). When we arrived, Murphy showed us around and noted that at the end of the hallway there used to be a parking lot, hence the sunlight that starts appearing towards the end of Gehr’s film. Now another wing of the building has been built there, so no light emerges from outside—if you wanted to replicate Serene Velocity as an exercise, there’d no longer be any sunlight coming in. It was both something and nothing to behold, but I was glad to finally see it.

5. Once we had beheld the hallway, Murphy asked if we wanted to see the Ken Jacobs Archive. This isn’t as fancy as it sounds: as he quickly explained, it’s basically Jacobs’s old office, with all the stuff he left there and couldn’t be bothered to come back for. It is, nonetheless, fascinating: there are objects both expected (3D anaglyph glasses) and less so (one corner is occupied by a tower of player piano rolls). The prize possessions are framed newspaper clippings and letters; in the latter category is an article headlined “LOCAL GROUP SEEKS FIRING OF CINEMA PROF” (Jacobs himself, for a showing a short that a local group considered “pornographic”). Framed correspondence includes letters from Hollis Frampton and a despairing epistle from Bruce Conner, sent from San Francisco in 1973, which begins “It is as bad as I thought here.” I thought back to summer 2020, when I logged on to watch Jacobs himself premiere a new film online, noted the full circle nature of the visit and moved onwards.