“You Never Know When You Will Have a Great Image”: Ryusuke Hamaguchi on the Oscar-Winning Drive My Car 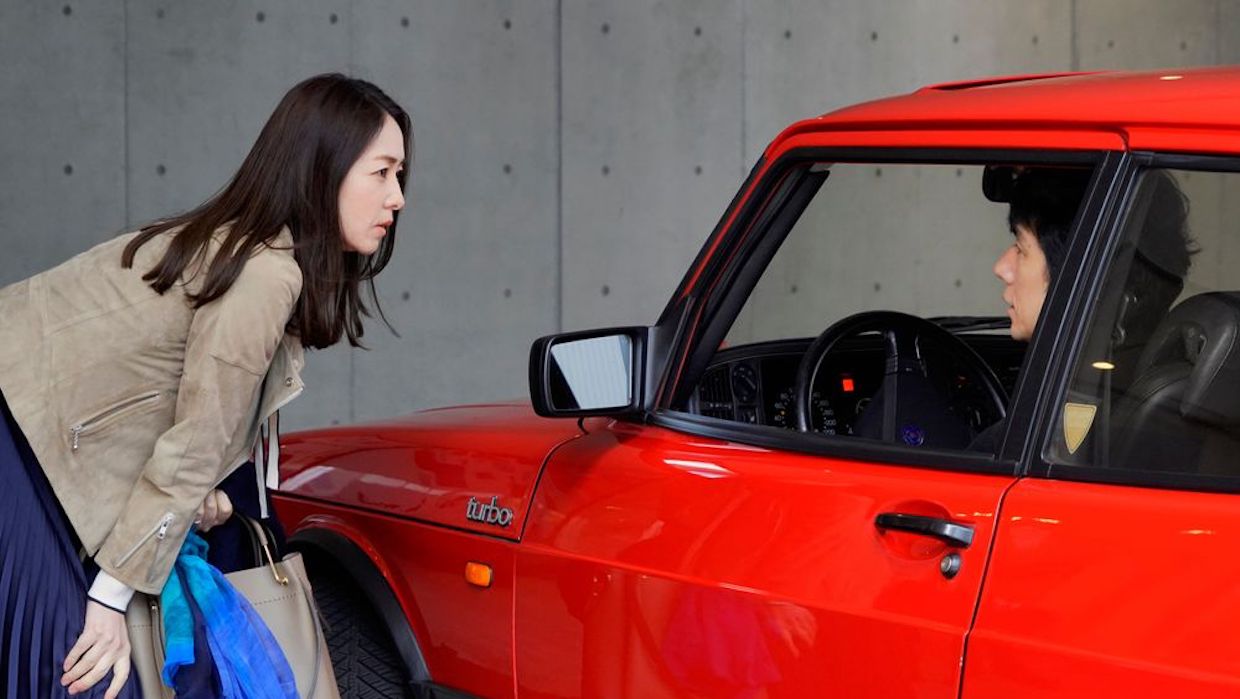 Originally appearing here in July, 2021, Filmmaker‘s interview with Ryusuke Hamaguchi about Drive My Car is being reposted today alongside the film’s Best International Feature win at the 2022 Academy Awards. — Editor

It might strike some as sacrilege when I say that the excitement I’ve felt around Ryusuke Hamaguchi’s run of recent work reminds me of watching (and catching up with) the films of Arnaud Desplechin in the 2000s. Drive My Car, which had its world premiere in Competition at Cannes, follows the ecstasies and agonies and everything in-between of Happy Hour, Asako I & II (worth singling out for its breathtaking heights of romantic folly) and Wheel of Fortune and Fantasy, the mercurial triptych which won the Silver Bear at Berlin only a few months ago.

His newest film (which originally was to precede Wheel, until COVID shutdowns caused an eight-month interruption) adapts a Haruki Murakami story about a reserved stage actor and director, Yusuke Kafuku, married to a formidable screenwriter, Oto (Reika Kirishima). Hamaguchi establishes the exhilarating romantic and creative dynamic they have, setting up their relationship as a fascinating territory to explore and understand, until Oto’s sudden death leaves a void. Shifting gears (and switching up Murakami’s structure) the story moves with Kafuku to a directing residency at a Hiroshima theater, where his red Saab 900 Turbo is assigned a driver, Misaki (Toko Miura), a respectful baseball-capped worker bee who emerges as a simpatico fellow survivor. Having played the lead role of Uncle Vanya repeatedly, Kafuku directs a fresh production with a multilingual cast that includes a volatile star, Koshi Takatsuki (Masaki Okada), who reveals his past connection with Kafuku’s wife; the play nourishes Kafuku’s (sometimes unwilling) stock-taking, its iterations a counterpart to his habit of prepping parts by running lines in a car to a recorded audiotape.

Hamaguchi has made what is quietly one of the most deftly shot and framed films in this young decade, finding a flow and a route (his words) through its three hours and the secret emotional intricacies that are shared. I spoke with the filmmaker through a translator.

Filmmaker: Ideally we would be conducting this interview in a moving car.

Filmmaker; Among other things, Drive My Car makes excellent use of the pressurized dramatic potential of car interiors, as did the first chapter of Wheel of Fortune and  Fantasy. How do car scenes work for you as a storyteller?

Hamaguchi: There’s this Iranian artist called Kiarostami, and his films have very striking scenes where there’s a driver and the surroundings are changing a lot. And at the same time, the relationships between the characters are changing as well. I began to think that this image was somehow a condensation of life. It’s also the same with Wim Wenders and all of his transportation scenes, where a relationship changes and the fact that the surroundings change at the same time helps you understand that something is evolving. This is what inspires me the most.

Filmmaker: Through the theater milieu, Drive My Car gets fairly deep into the weeds on the process of directing actors, and it lead me to reflect on how you approach staging and establishing trust.

Hamaguchi: Generally speaking, I will ask my cast to read the script multiple times until the whole script becomes almost spontaneous for them. What I try to keep in mind is to give the actor the best environment, the best situation for them, so that they can be relaxed in front of the camera. I think standing in front of the camera is a scary experience, and even though you get used to it, there will always be an amount fear that will remain. But with this fear, I try to give them the best conditions possible. Once we have this trusting relationship, I just give them the freedom of doing what they feel like doing.

This general rule of thumb I just explained is something that will not change for me for all scenes. But some exceptions can be made. For example, a [love] scene for me is a high-risk scene for me and even for the actors. So in that case I will detail the choreography, telling them that they will be [situated] this way, I will shoot from this angle, we will only see this part. Detailing all of that enables you not to waver when you actually have to do the scene, and you know that you can trust the process. There wasn’t anything specific I did for the car scenes, but the general rule is that you can’t move much because space is restricted. So as a director, it’s pretty easy to shoot them because it’s self-explanatory because of the restrictedness of the space.

Filmmaker: It helps to have actors who are good to watch even when they’re “doing nothing.” I was especially impressed by Toko Miura as Misaki, the driver, and Reika Kirishima, as Oto, Kafuku’s partner, who makes the most of her portion of the film. What particular qualities lead you to cast them?

Hamaguchi: For Miura Toko, I think that the first impression I had of her is as someone is that is very intelligent. She is able to grasp very easily the core of the story. And this intelligence she has is not an aggressive smartness but a smartness that lends itself to helping people. That quality meshed very well with Misaki’s qualities, and that’s why I saw her and had to ask her to do this role. As for Kirishima Reika, it turns out that she is extremely brave. She is someone who is very serene, very calm, but just after reading the script once, she said “Yes, I am interested, I want to do this.” And with all of those high-risk scenes—there are a lot—she did them very calmly and embraced all of those challenges. This intelligence of Miura Toko and this braveness of Kirishima Reika made the film possible.

Filmaker: Hidetoshi Nishijima is of course at the center of the film as Kafuku, and we see the closeness of his romantic and working relationship with Oto. One key scene is when Takatsuki, the lead actor in his production of Uncle Vanya, reveals that Oto also told him stories during sex—an intimate routine which Kafuku viewed as specific to his relationship with her. It’s a fascinating and complex moment—could you talk about the dramatic workings of this revelation?

Hamaguchi: Yes, clearly, in this scene Kafuku is hurt by this revelation, and I think that for him, the story that his wife would tell [during sex] was almost more important than the act of having a sexual relationship with her. That’s why it’s understandable that when he sees his wife having sex with another man, he’s able to maintain his composure. But when this revelation is made by Takatsuki, it kind of destroys the last piece of pride he was still holding onto. If viewers can feel that this scene is interesting, it’s because we can see the precise moment that the mask that Kafuku was still wearing is torn to pieces. We also feel that it’s an interesting moment because it’s something that could happen at any time in our lives as well, or maybe has already happened. And I think that if the scene about his wife is meaningful, it was also made possible by Nishijima Hidetoshi and how he reacts, and also by Okada Masaki as Takatsuki, telling this story of his wife. This dynamic was also why this scene was very striking for all of us.

Filmmaker: The character of Misaki reveals a traumatic history of her family’s house getting destroyed in a landslide. In thinking about this and related scenes, did you draw on your documentary work with survivors of the 2011 Tohoku earthquake and tsunami?

Hamaguchi: The documentary I made was a big experience in my life, and I think I can even say that it was a core experience in my life. Ever since then, it has impacted the way I make movies as well. And of course there is something [from it] in the character of Misaki, who has had this disastrous event in her life. The disaster helps her connect with Kafuku who, though not on same scale, also had a small disaster in his life. This will also help him connect.

Filmmaker: In Drive My Car you unobtrusively find fresh ways into and out of scenes, with a masterful editing rhythm. Could you talk about your visual scheme for the film?

Hamaguchi: When we are actually shooting the film, the actors don’t really have a choreography in each and every scene. They’re quite free. Of course, we have general rules of “it starts here and ends here and this is the thing you have to do,” but otherwise actors are really free to move and express what they  feel at that moment. And if we have a limited frame in a given shot, for example, it’s not the actors that should submit to it, it’s the crew that has to make it possible. In this movie the cameraman’s framing was pretty much perfect even in unpredictable situations. And each time you are able to make a good image, I always think it’s a coincidence, because the fact that the framing was good at that moment or the emotional communication was good at that moment is always a coincidence. You never know when you will have a great image. Editing comes in at that moment: you’re supposed to connect all those good scenes that were taken by sheer coincidence and patch them all together for them to make one route, one flow, if that makes sense.

Filmmaker: There’s a constant flow back and forth between the story and the play that Kafuku is directing, Uncle Vanya. I have to say Drive My Car is a wonderful addition to movies that use theater in that way—do you know Esther Kahn?

Hamaguchi: [in English] Yes, of course.

Filmmaker: I thought of that a little.

Hamaguchi: [in English] Thank you so much.

Filmmaker: Do you feel any special affinity for Uncle Vanya? I know it’s in Murakami’s story (and his novel 1Q84), but playing a somewhat smaller part than in Drive My Car.

Hamaguchi: It’s simply that Uncle Vanya for me is a very strong text. I had already read it in  the past, and reading it again for this, I was amazed by how strong the text was. And maybe the fact that it was intertwined with Kafuku’s emotions in the movie helped me realize how strong the text was. From that starting point I could see the other strong feelings that are present all over this incredible text. Hhaving this parallel story going on in the movie helped me emphasize as well the unchanging and unwavering quality of Chekhov’s texts. I wanted to know the impact that it could trigger, and this is some sort of a confirmation of how much Chekhov text can trigger the emotions when one tries to act and read all the lines in the text.

Filmmaker: Yes, Kafuku hesitates to take the role of Vanya at one point precisely because it brings out “the real you.”

Filmmaker: What are you filming next?

Hamaguchi: I don’t have actual plans for the moment. I vaguely have the idea that I will make a documentary, and I’m starting to see if it’s possible with the target of this documentary. But for the moment, nothing complete.

Nicolas Rapold is a critic and editor. He hosts the podcast The Last Thing I Saw, featuring conversations with critics and filmmakers.