“I Try to Expose Myself to Unknown Territory”: Pablo Larraín on Ema 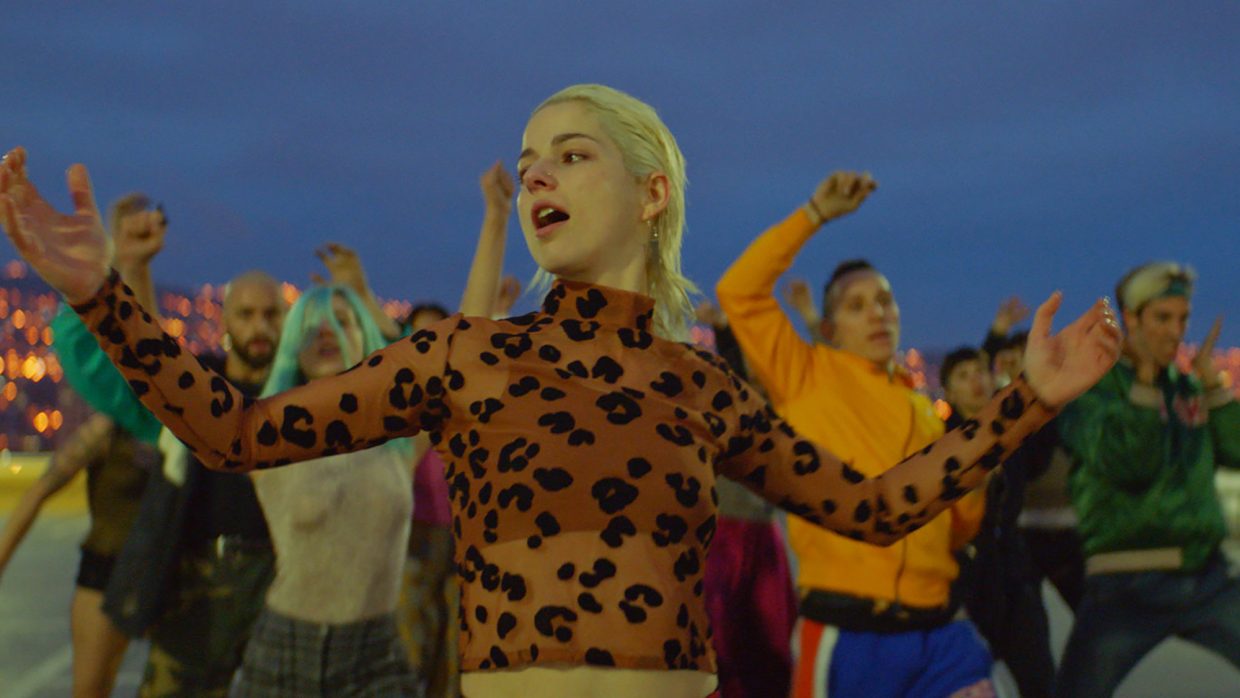 Ema is Pablo Larraín’s eighth feature film but has the energy of a new beginning.  When I saw it at Sundance 2020, this boldly experimental narrative seemed like a new approach from the established director who had put Chilean fiction filmmaking on the international map in a new way with a rapid-fire series of films that included the Academy-nominated No (2012), Berlin Silver Bear winner The Club (2015) and Neruda (2016), as well as US projects Jackie (2016) and the recently released HBO series Lisey’s Story.

A month after the festival, images from the film lingered in my mind, in part because I didn’t totally understand it and had the rare feeling I’d seen something I hadn’t seen before.

The other reason was that it seemed closely related to the events in Chile, where I live part of each year. Our neighborhood was the center of the biggest demonstrations the country had ever seen, which began October 2019 and culminated a year later in a plebiscite in which almost 80% of the country voted to create a new constitution to replace the one put in place under the Pinochet dictatorship which had ended twenty years prior.  From the opening shot, it seemed to predict many of the images that had become part of our lives.

Much of the coverage of the film has focused on the story, which follows Ema (Mariana Di Girólamo) on her journey of sex, dance and pyromania in the wake of a tragedy that had her give up the son she had adopted with husband/choreographer Gaston (Gael García Bernal).  I spoke to Larraín about other aspects of the film: his formal experimentation, the use of dance and movement, and how he captured the profound lack of nostalgia of a younger generation, after a series of films set in Chile’s past.

Filmmaker: I saw Ema at Sundance, and from the opening shot of a burning sign in Valparaiso it had a huge resonance with the social uprising that had begun the previous October. But you had made the film before that happened, so it felt prescient in some of the images that you created, like a dreamscape of this moment and generation in Chile.

Larraín: We released the movie right before the social outbreak started. It was interesting because there’s a lot of things related to fire, and that actually happened. I guess somehow we were looking at the same issues but with different angles.

Filmmaker: We were living on Bustamante at the time, everything was on fire around us.

Larraín: Oh, wow. You were right in the middle.

Filmmaker: At the same time, I had the impression that you’re exploring something really new in your work. The beginning is striking: eleven or twelve minutes with almost no language.  There’s a little scene on the street and a little scene in the hospital, but I felt in that beginning – and throughout the movie – like you’re exploring a new language that’s purely visual, sound, and body movements.

Larraín: I try to find a place that I have personally never been as a filmmaker. That doesn’t mean that others haven’t, but [I try] to expose myself to a type of unknown territory. Yes, we had the idea to try an opening that was more visual and more sensitive, with some sort of strange sensuality, but I never thought it was going to be that long. Then Nicholas Jaar brought that wonderful music, and things came together in a way I didn’t expect. It’s really related to it being a movie that was made with an unknown destiny, if you can say that. For most of my career, the way you make a movie is that you have the concept and you write it, it takes time. Then once you have written it, you go out and set up a team: a crew, a cast. Then you finance it, then you make it, and then you cut. That’s from one to three years. Here, we were going to do something else that got pushed, and we had this time. I had this old idea and my brother was able to find a way to finance it.  So, we developed it with both writers [frequent collaborator Guillermo Calderón and Alejandro Moreno] but shot a movie that didn’t really have a script before starting. We had an outline and wrote everything as we filmed it.  That creates a different type of energy for everyone involved, particularly the actors, who didn’t know what was really happening because we hid the script from them. They were facing the void of the uncertainty – as we all do in real life.

Filmmaker: The movie has that feeling of an adventure or a discovery, which is really a great energy. Do you feel like you were able to explore and learn things in this film that you will carry forward in future work?

Larraín: Of course, I learned a lot. I think that dance — a body in motion — can be a very interesting political way to express your idea. More than with words.  Maybe that opening that has dancing and some words and a bit of the conflict that is going to come in the movie kind of goes into your skin more than your brain. It is very interesting when you work in a space more sensitive than just narrative.

Filmmaker: That confrontation between words and movement is in the scene with the lawyer, where Ema is negotiating their relationship and her payment and she begins to dance. It’s really striking, this way of answering established society with a non-verbal way of communicating.

Larraín: Dancers use the body to express themselves and deliver their statements on all kind of ideas. Words become less relevant, words are just the way to face the day-to-day more than to create a path of life. That’s what I really learned from them.  It was very beautiful to learn how dancers really can say many things because they are unique in the way they dance.  For example, if you go to a party, you are with people you know well. You see them dancing, and the way that they dance is intimately related to who that person is. No one else would ever dance like them. It’s like the human voice or face. That human body that everyone has is not repeated. It’s unique, even though there are billions of us on this planet. No one else would ever dance the way you do, and that has something very interesting that I think cinema can use really well. That’s what we chase as well: to try to understand that movement is also a political testimony of each dancer and character.

Filmmaker: Except for Gaston, who doesn’t really dance.

Larraín: But he’s the choreographer. And he’s the one that belongs to a different generation, so it’s harder for him to connect. She is the one that is teaching him, ultimately. He’s the master of the dance company, and she’s just a dancer. And by the end, she’s the one that understands how to put a family together, which is what they care about.

Filmmaker: The other thing that struck me is that it’s maybe the most contemporary film I’ve seen from Chile. There are all kinds of films made in Chile, but it is mostly known for films that deal with negotiating the past.

Larraín: Because it’s a new generation which isn’t mine, that I was interested to build with and to learn from. Most of the main characters were younger than me. They dance to a different type of music, and they see the world and culture very, very differently. This was an opportunity for me to get into a generation that had a lot of things I could learn from.  At the beginning, I had a different idea of the type of music that they were going to dance to. I very quickly understood that this generation was dancing in the streets, dancing reggaeton. Which is not the type of music I usually listen to.  I had to re-adapt the music. It was Nicolas Jaar who showed me that path and started sending me music, and that really affected the process.

Filmmaker: It feels like a film that was really created in the editing, more than some of your other films. I like this energy, and work as an editor on a lot of films like that.  Some of Josephine Decker’s films have edited for a year, because there are so many possible movies in the material.

Larraín: Until you find it.  It’s true. We shot scenes that they had to be before or after others for logical reasons. And then we shot a lot of ideas that could be pretty much anywhere. We had three different types of scenes: scenes that had a number; scenes that didn’t have a number; and scenes that had an X. We put X-1, X-2, X-3 on the slate, which is a scene that is unrelated to the main structure, a scene that could be used anywhere. When you have that in the editing room, it can be very chaotic at the beginning, until you understand what the thread is that you’d like to follow. It’s a movie that we edited for longer than we wrote, prepped, and shot the movie combined, which is very unusual.

Filmmaker: The last thing I wanted to talk to you about is your work as a producer, because it’s not so well-known in the U.S.  What you do at Fabula producing so many young Chilean filmmakers is really ambitious.  When I was talking to Rocío [Jadue, Head of Latin American Film at Fabula] before the pandemic, she was telling me the work you’re doing internationally is in a similar vein, and I’d love to know a little bit about your vision for that.

Larraín: Well, my brother [Juan de Dios Larraín] is really the producer, I get involved in a more creative space. We try to connect with filmmakers that we admire that are starting, or maybe already have a very interesting body of work, not necessarily younger than us. We’re not the type producers that we get involved and tell the directors what we want, or what they should be doing. What we try to do is hear them and try to support their vision. It’s wonderful, and in my personal case, I get to see other filmmakers’ process, otherwise you are never be able to do that. Actors go and work with different directors, crew and producers work with different filmmakers and experience their processes, but it’s not what happens to directors. You’re usually so isolated in your own stuff that you don’t get to connect and see other people’s processes. I’ve been able to experience that, and to help in some cases, and that’s been great. Even though the film landscape is challenging that there are opportunities and new people, and finding a way to connect opportunities to the new people creates a synergy between the office we have in Mexico and the office in LA, with our center office in Chile. That’s the energy we’re trying to create.