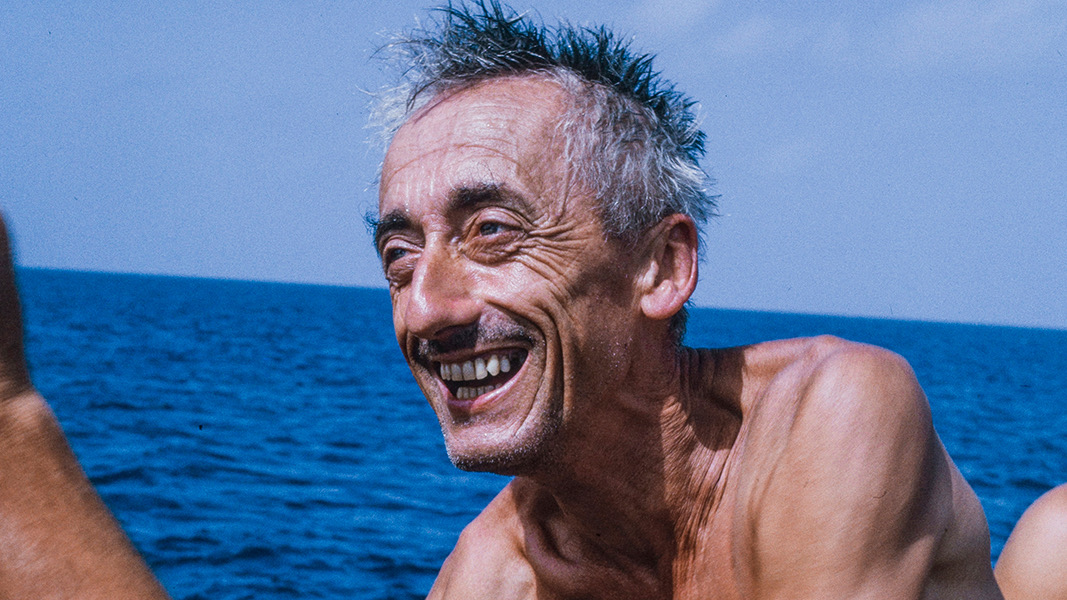 The Camden International Film Festival announced today the features and shorts comprising its 2021 edition. The festival’s in-person component will take place September 16 – 19 at venues in Camden and Rockland, Maine while an online edition will stream for North American audiences from September 16 – 26. Thirty-seven features and 33 shorts from 30 countries will be presented, with just over half — 52% — directed or co-directed by POC directors. Women directed or co-directed 57% of the titles.

The festival also announced that “it will continue with its Filmmaker Solidarity Fund, a one-of-a-kind funding model established in 2020 that redirects 50% of all revenue from CIFF’s virtual pass and ticket sales back to participating filmmakers.”

The Mexico City police department is one of the world’s most controversial institutions. A COP MOVIE blends documentary and narrative storytelling to shed light on the causes of the impunity crisis that plagues the city’s justice system.

A NIGHT OF KNOWING NOTHING

A university student in India writes letters to her estranged lover while he is away. In them, a glimpse into the drastic changes taking place around her emerge, shining light on a convoluted contemporary India.

Expanding across both poles, AFTER ANTARCTICA follows legendary polar-explorer Will Steger’s lifelong journey as a witness to change in the arctic. Thirty years after his historic coast-to-coast expedition across Antarctica, Steger traverses the ice one last time.

Based on a true story of “invented islands,” ARCHIPELAGO uses drawings and speeches to interrogate what is real, dreamed or in-between. The film ventures into physical, imaginary, linguistic, and political territories, to examine a place and its inhabitants.

ASCENSION is an impressionistic portrait of China’s industrial supply chain that reveals the country’s growing class divide. Through staggering observations of labor, consumerism, and wealth, the documentary examines what living the so-called “Chinese Dream,” looks like today.

BECOMING COUSTEAU takes an inside look at the beloved adventurer, his iconic films and inventions, and the experiences that made him the 20th century’s most unique and renowned environmental voice — and the man who inspired generations to protect the Earth.

Known to most for his stellar sports career, CITIZEN ASHE uncovers tennis legend Arthur Ashe’s personal evolution, chronicling how his activism grew to embrace not only the Civil Rights movement and African-Americans, but all oppressed peoples throughout the world.

In a small military town in Texas, three wild-spirited teenage girls have a fever-dream summer. This debut feature film offers a glimpse into authentic American girlhood, where the strictures of adolescence clash with the growing desire for agency.

Constructed from audio archival footage of the 1961 Harvard-Peabody Expedition into Netherlands New Guinea, EXPEDITION CONTENT reflects on a colonial encounter with the indigenous Papuans, presenting parallaxing images of history and colonialism through field recording and ethnographic film.

Two biologists set out on an undertaking as colossal as their subjects—deciphering the complex communication of whales. Dr. Michelle Fournet and Dr. Ellen Garland journey to opposite hemispheres to uncover a culture eons older than our own.

The highlands of Harar are immersed  in the  rituals  of  khat,  a  leaf  Sufi  Muslims  chewed  for  centuries  for  religious  meditations  – and  Ethiopia’s  most  lucrative  cash  crop.  This intimate tapestry journeys into the dreams of youth under a repressive regime.

On the verge of marrying his husband, Amin shares the hidden story of fleeing his country (Afghanistan) as a refugee for the first time.

KÍMMAPIIYIPITSSINI: THE MEANING OF EMPATHY

Witness the partnership of community members with substance-use disorder, first responders, and health professionals in the Kainai First Nation, as they use harm reduction practices to bring hope and change to Blackfoot people.

Filmed on location in Northwest Washington, LAKE FOREST PARK (un)winds the tale of a group of young friends coping with the secret of a classmate’s death. The film explores collective and individual grief tinged with existential confusions.

12-year-old Reyboy is about to leave the isolated fishing village of his boyhood to attend high school in the city. Director Venice Atienza witnesses his last days at sea, before the precious moments of his childhood become memories.

An examination of the most popular instrumentalist of all time, Kenny G, and why he is polarizing to so many.

Magaluf, Mallorca, is a peaceful seaside town that turns into one of the world’s most heavily overcrowded tourist destinations in summer. How do the locals survive in this low-cost tourist paradise?

In the place where conventional authority structures dissolve, a tomboy, a sea captain, an independent pregnant mother, and two wayward fishermen must find their place. An ode to nature, interdependence, and the freedom of one of Brazil’s last Caiçara communities.

Filmmaker Angelo Madsen Minax returns to his rural Michigan hometown after the death of his young niece. What begins as a film investigating a broken criminal justice system transforms into an excavation of generational addiction, Christian fervor, and trans embodiment.

On Ostrov island in the Caspian Sea, Russian inhabitants abandoned by the state struggle to survive. Ivan regularly risks life and freedom attempting escape. He laughs, dances, and struggles, hoping that one day, Putin will find mercy and send help.

OUR MEMORY BELONGS TO US

Three Syrian activists are reunited on a theatre stage in Paris. 10 years after the revolution, they revisit traumas and memories of a ferocious war.

An inside exploration into the work of legendary French artist JR, whose large-scale photographs have covered structures across the globe for two decades. The film discusses how art unites communities.

In the American heartland, six survivors of childhood sexual abuse by Catholic priests become a makeshift family as they collaborate to create staged scenes depicting rituals of power in the church.

Seven different groups of passengers embark on a journey down the edge of a vast forest. Containing elements of documentary, ethnography, and fiction, ROOTS is a strangely wondrous and often exhilarating film.

A family confronts their widely different understandings of systems that entangle them while navigating a 5-year bankruptcy, the wake of Hurricane Katrina, a father’s career as a debt collector, Agent Orange, and the life-altering expense of college education.

SILENCE OF THE TIDES

A poetic film that inhales and exhales along with the tides of the Wadden Sea as it explores the delicate relationship between man and nature.

SONGS THAT FLOOD THE RIVER

Oneida was still a child when she learned the Afro-Colombian tradition of singing “alabados” to accompany the dead on their journey to purgatory. Today, Oneida’s compositions unite millions through the reconciliation process of one of history’s longest wars.

Amateur travelogues by women in the 1920s-50s are woven into this meditation on the traveler’s gaze. A mountaineer, a divorcee on a tour of biblical gardens, an antique merchant, and others are revealed through their own optical autobiographies.

THE FAITHFUL: THE KING, THE POPE, THE PRINCESS

A lollipop officially licensed by the Vatican sparks a filmmaker’s 20-year exploration of memorabilia, memory, and legacy within the orbits of three of the biggest cultural icons of our time: Pope John Paul II, Elvis Presley, and Princess Diana.

As if in an uprising of spores, the encounters of this film explore the theme of renewal, and question what connects us when the world seems to be falling apart.THE MUSHROOM SPEAKS traces possible alliances with the fungal reign.

This kaleidoscopic documentary portrait explores the many facets of a complex figure whose life was as extraordinary as his art. For decades he was the most famous man in the world, but who was THE REAL CHARLIE CHAPLIN?

THE RESCUE chronicles the against-all-odds story of the 2018 rescue of 12 Thai boys and their soccer coach, trapped deep inside a flooded cave. E. Chai Vasarhelyi and Jimmy Chin reveal the perilous world of cave diving, bravery of the rescuers, and dedication of a community that overcame insurmountable odds to save these young boys.

In the heart of the Tibetan highlands, photographer Vincent Munier brings writer Sylvain Tesson on his quest to find the snow leopard. Through their journey, the duo finds a common appreciation, and celebrate the beauty of the world.

In 1999, climber Alex Lowe was lost in a deadly avalanche on Mount Shishapangma. This profoundly intimate film from eldest son Max, turns the lens on his own family and captures their intense personal journey toward understanding as they finally lay him to rest.

Underdog is the curiously optimistic story of Doug Butler—a hardscrabble Vermont dairy farmer who risks losing the only home he’s ever known to chase his dreams of dog mushing in Alaska.

death and her compass

Homage to the Work of Philip Henry Gosse

Letter From Your Far-Off Country

Listen to the Beat of Our Images

NOVA: A New Spelling of My Name

They Won’t Call It Murder