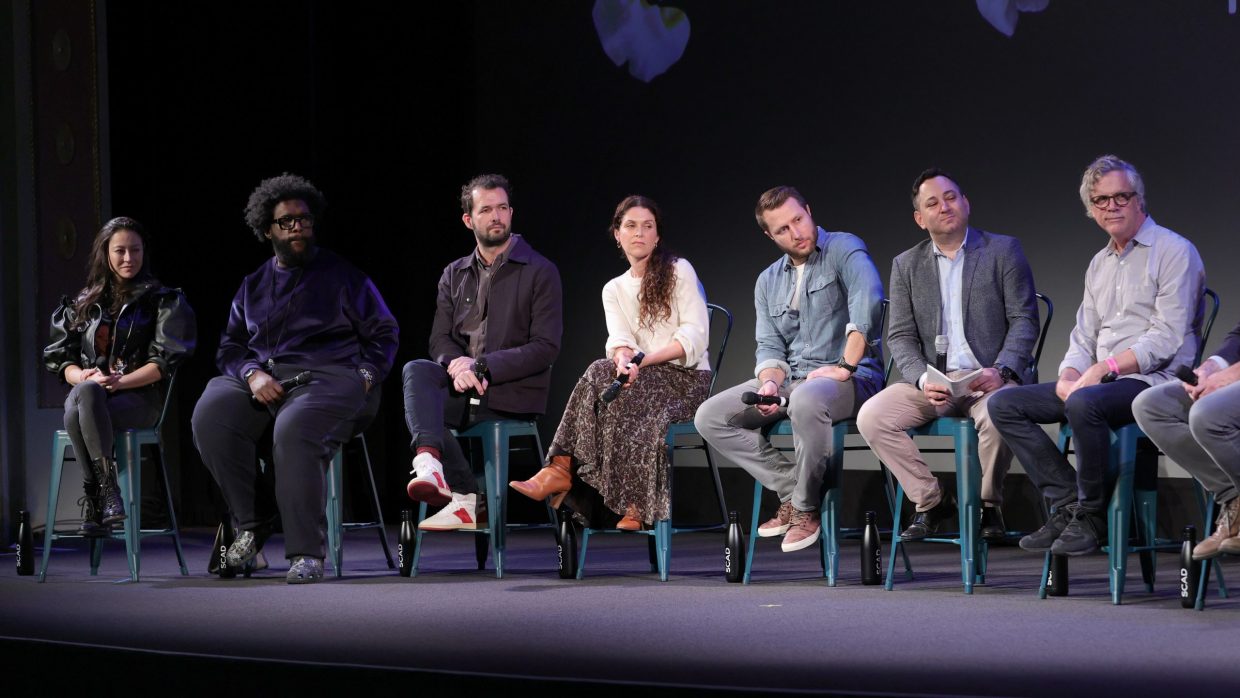 This year’s SCAD Savannah Film Festival – the “largest university-run film festival in the world,” which ran from October 23-30 – was a conveniently hybrid event that also marked my own return to the in-person festival circuit. Admittedly, as someone residing in a blue state with a strict mask mandate in place, traveling to the Deep South was a somewhat disorienting experience. And a stark reminder that the U.S.’s politicization of a global pandemic really is a war within – and specifically within the states themselves. On the one hand, Georgia’s Republican Governor Kemp issued an executive order back in August that banned local jurisdictions from imposing mask mandates. On the other hand, the liberal college city of Savannah has a mandatory mask mandate. Which, like elsewhere in our exasperatingly dysfunctional country, seemed to result in a disturbing hodgepodge of mask-less red tourists mixing it up both indoors and out with the masked up blue locals.

Fortunately, this southern fest doesn’t play when it comes to health protocols (as at the Savannah College of Art and Design itself, proof of vaccination and masks were both required and strictly enforced), giving the 24th edition the air of an all-inclusive Covid bubble.

And this sentiment was made all the more palpable at the 8th annual – first return-to-in-person – Docs to Watch Roundtable on October 24. Taking place once again at the Lucas Theatre for the Arts (and also virtually for pass-holders), the annual Docs to Watch roundtable, hosted as always by The Hollywood Reporter’s Scott Feinberg, featured a who’s who of likely upcoming Oscar nominees. Taking the stage one by one, there was Evgeny Afineevsky (Francesco), Julie Cohen (Julia), Liz Garbus (Becoming Cousteau), Robert Greene (Procession), Todd Haynes (The Velvet Underground), Matthew Heineman (The First Wave), Amanda Lipitz (Found), Jonas Poher Rasmussen (Flee), Ahmir “Questlove” Thompson (Summer of Soul (…Or, When the Revolution Could Not Be Televised)), and E. Chai Vasarhelyi (The Rescue).

Starting from the top, Feinberg began by asking Afineevsky how he decided to make a film about Pope Francis – seeing as how Afineevsky is also the guy behind 2016’s Oscar and Emmy-nominated Winter on Fire: Ukraine’s Fight for Freedom, as well as 2017’s Cries from Syria, neither of which are exactly feel-good material. The US-based, Israeli-American (by way of Russia) director replied that he simply needed to be uplifted, to reinvigorate his hope for humanity. Which likewise seemed to be the reason Cohen (along with co-director Betsy West) decided to tackle the iconic Julia Child. It was the French cuisine evangelist’s “joie de vivre” that drew her in. Garbus, on the other hand, had a very practical reason for wanting to explore the famous Frenchman of the sea: she couldn’t locate the information about Jacques Cousteau’s life that she was most curious to learn.

Greene, however, chose to focus on the survivors of sexual abuse by Catholic clergy because he actually wanted to “know nothing” when it came to the horrors of sexual abuse. Which meant he had to do the film; he needed “to not turn away.” Haynes also hadn’t planned to ever shoot a documentary about the Velvet Underground until Laurie Anderson made Lou Reed’s archives available. Then it became a no-brainer to sign on.

As for Heineman, he just felt “compelled” to tell the inside stories of the pandemic that weren’t getting aired, while Lipitz (the documentarian behind 2017’s Step, about a Baltimore high school girls’ dance team) admitted to being “fascinated with teenage girls” and wanted to follow her own niece’s journey to find her biological parents in China. Danish/French director Poher Rasmussen similarly had a personal connection to his main character, who he met when he was 15. He just wanted to learn his friend’s story of becoming a child refugee. And when he unexpectedly started working in animation it struck him as the perfect way for Amin to stay anonymous.

Thompson likewise had been pondering his subject for years, and actually first saw a clip from the 1969 Harlem Cultural Festival two decades ago in Japan. Though he had no idea what it was at the time, he immediately found himself intrigued by the prospect of diving into something he wasn’t aware had even happened. Or as he more creatively put it, “wanted to jump in a time machine and treat 3-year-old Ahmir” to the event. As for Vasarhelyi, it was the opposite. As the parent of Asian kids, the moral courage that fueled the Thailand cave rescue both gripped and moved her.

Vasarhelyi went on to recall not having the footage they needed to tell the story — thus reenactments were essential. After negotiating with the Thai Navy Seals over Zoom – and getting vaccinated – she was eventually able to fly to the country to make the case in person as to why the authorities should provide interviews and footage to the filmmmaking team. Which led Feinberg to ask not only about the contentious use of reenactments in general, but also about animation (to Poher Rasmussen) and intense collaboration with subjects (to Greene). These were not “traditional” documentary techniques, Feinberg posited. Indeed, Poher Rasmussen had never created an animated film before and had to work diligently with his team to develop a visual style based on Amin’s voice. He cited Ari Folman’s Waltz with Bashir as a profound influence, noting that animation is a great way to tell stories that involve trauma.

As for Greene’s “drama therapy,” the moderator was quick to point out the real potential for re-traumatizing oner’s characters. How does a director avoid such fallout? Greene readily concurred, which is why he began production keeping in mind that “This could be a disaster.” A director must acknowledge that risk. He himself wasn’t sure how far he could take the process. Nevertheless, Greene forged ahead and built a “sandbox” with safety measures in place, hoping to allow his characters to “have fun” (and catharsis).

Cohen also employed an element of play, right down to having a food stylist on set. She reminisced about growing up pre-Julia, eating spaghetti with ketchup and “mock apple pie” with Ritz crackers, until Child changed everything for Americans. Dan Akroyd had caricatured America’s French foodie on SNL — which ended up memorializing her as a buffoon — so she wanted to resurrect Child’s importance as revolutionary. Before Julia a lady on TV wasn’t supposed to be “middle-aged, loud and hulking.” As with the team’s previous doc RBG, she sees Julia as a feminist film as well.

Feinberg then turned to Afineevsky, a Russian-Jewish emigre to Israel who is openly gay. Why did Pope Francis even agree to speak with him on camera? Afineevsky admitted it was a long process that began at the edges. He first built relationships with people who knew, and know, Francis. After connecting through email Afineevsky was eventually able to meet him in person to present his emotional appeal. The director believed that by focusing so much on the voices of people around Francis, rather than on the holy man himself, he was able to move the pope to say yes. As for Thompson, the core emotional elements of his film were completely unplanned. Unlike the meticulous Afineevsky, he was clueless when it came to how emotionally affecting the “Black Woodstock” had even been for his interview subjects.

Garbus then noted that dealing with estates is one of the most difficult aspects of production for her and that Becoming Cousteau was that “on steroids.” His messy family life made things intense when it came to the archive. Sure, she had dealt with such drama while trying to profile Nina Simone, but this was worse — and why it took seven years to make. Surprisingly, though, it was the small things that the family was sensitive about — not the big things like affairs. That said, Garbus was adamant about retaining editorial control — “Otherwise you’re finished.” (Cohen likewise had to have the Childs onboard since they have to “give the OK on everything” when it comes to Julia’s archive. She was fortunate, however, as they didn’t even ask to see the film until it was completed. There was that much trust in the relationship.)

Haynes felt especially thankful to get Velvet Underground musicians Moe Tucker and John Cale onboard but also critic Amy Taubin and filmmaker Jonas Mekas (in his last filmed interview). In fact, conducting interviews was a completely new experience for Haynes and one which took him in a different direction. He ended up choosing to center the doc exclusively on that time period and on those who were there, which laser-focused the narrative. The director of 1998’s Velvet Goldmine (with its Curt Wild character partially inspired by Lou Reed) was then free to embrace the bigger picture, speaking frankly with Taubin about such things as what it was like to actually be a woman at the Factory – “a difficult place.” Which, of course, was not necessarily everyone’s experience. What they all seemed to agree on, however, was Warhol’s chaotic studio as “a protected place of creative freedom.”

Which led Vasarhelyi to reflect passionately on the fact that everyone who participated in the cave rescue had “emerged transformed.” The divers and the support crew all viewed it as a “calling, a sentiment that translated to the filmmaking team. She and co-director (and husband) Jimmy Chin similarly “emerged transformed” after doing the film. Feinberg then turned to the only other person of color on the panel to inquire about “combating Black erasure.” Thompson spoke honestly about shaping the doc during the protest summer of 2020, noting how relevant the film suddenly felt. The Roots co-frontman/drummer even mentioned that he’d turned into the human being he “used to laugh at.” When the world stopped it seemed Thompson also emerged transformed.

Poher Rasmussen then offered that his friend and lead character Amin, a gay Afghan, was quite emotional after watching the film. He didn’t know “if it was good” but the reception at Sundance convinced him that others related to his story. He finally “felt seen.” As did the three girls at the center of Found, who Lipitz said “fell in love with each other” through the making of the film. Indeed, after her doc’s premiere the trio were overwhelmed with other adoptees reaching out from all around the world.

Heineman too spoke of “being changed forever” since documenting the pandemic — as well as living through it. He remains close to all his characters, calling the production “the most rewarding experience” of his career. Surprisingly, he went to bed every night having “hope for the world.” Which prompted Haynes to pine for “people being able to combust with each other” once before we all went online. This is how artistic process occurs, he strongly believes and how we get through really hard times as well. During the pandemic the veteran auteur found himself working on an Avid — returning to his earliest experiences as a filmmaker.

Greene then reflected on premiering the film at The Paris in NYC and seeing one of his characters have a “mass erasure of shame” when he got a standing ovation after the screening. The “audience completes the process for us,” he said. For all of us. Greene actually went into therapy because of the film (which he’s proud of having done) as he now sees the “opportunities” inherent in therapy. His characters are “leaders” to him. Healing and catharsis don’t come easy, Greene acknowledged, but it happens.

As the nearly two-hour panel wound down, Afineevsky emphasized that his journey alongside Pope Francis had taught him so much and had given him “patience and love.” Five weeks prior he’d become a dad. Art can “bring change, inspire and spread love,” he said. Which led to Feinberg’s final question. What’s the new baby’s name? To which the expat documentarian joyously exclaimed, “Francesco!”