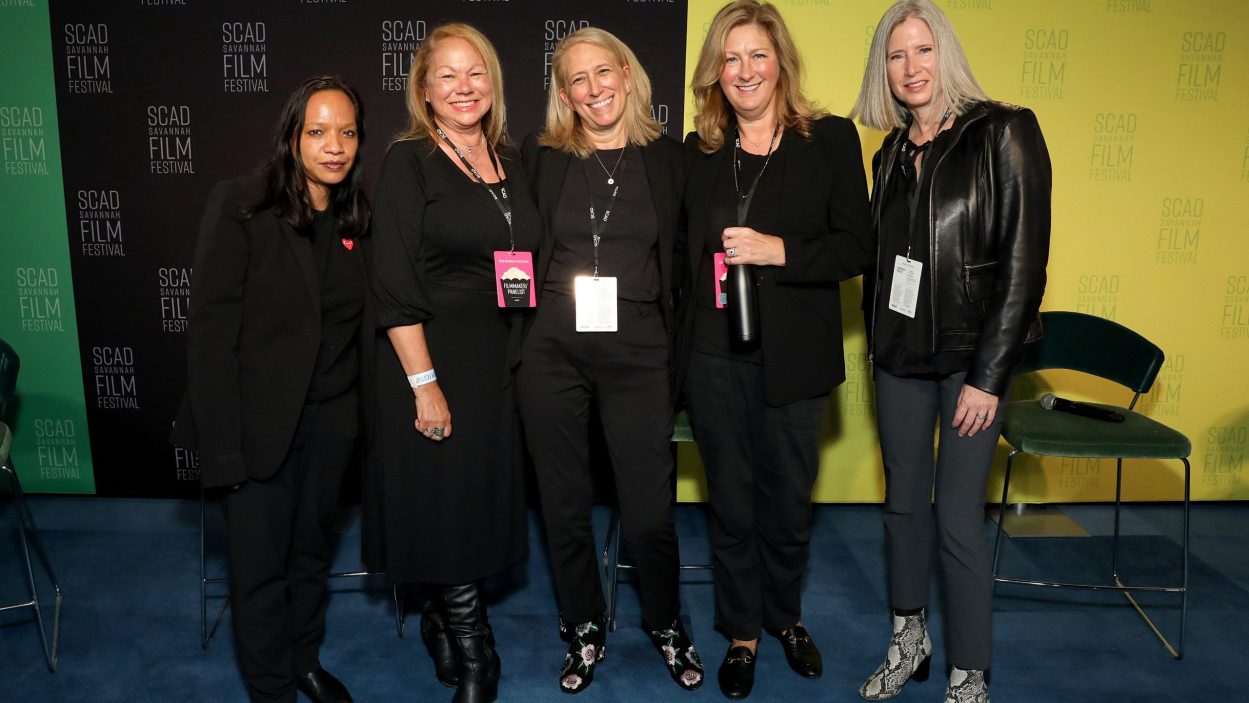 Taking place on a Thursday morning in late October at the Gutstein Gallery (or online for pass-holders who didn’t care to brave the rain), the Wonder Women: Below the Line panel at this year’s SCAD Savannah Film Festival (October 23-30) felt like a breath of fresh air. Moderated by Variety’s Jazz Tangcay, the participants included talent agent June Dowad, editor Pamela Martin (King Richard, Battle of the Sexes, The Fighter), and production designers Diane Lederman (CODA, The Americans, The Leftovers) and Ina Mayhew (Respect, Queen Sugar, Dolly Parton’s Heartstrings, Second Generation Wayans): All fiercely self-assured, middle-aged women with a wealth of knowledge. Not to mention careers long enough to allow them to bluntly call BS on a still gender-biased system.

Launching the discussion, Tangcay addressed the only Brit onstage, wondering how Dowad ended up as a talent agent in LA. It was quite the circuitous route, she explained. She’d actually started as a PA, and worked in nonfiction for a long time. It was only after she’d had kids that she moved to California and began optioning material. And then went back to school. She hadn’t really thought much about becoming an agent until a friend reached out to suggest she join her company. Dowad did – and ultimately bought the agency. But now she’s returned to the UK, where she’s signed on as a partner agent at WPA. “It’s never too late to start again,” she added brightly.

Though Dowad also lamented the fact that for a long time people didn’t even know that heads of department had agents. She felt strongly that below-the-line skills still needed to be recognized in their own right. She recalled her early days doing docs at Channel Four, where she once worked with a female director being mentored on her first feature by Michael Grigsby. Unfortunately, the two didn’t get along. So at the age of 23 she found herself in the uncomfortable position of having to fire a legendary documentarian, which she promptly did. Grigsby then turned around and hired her as his producer on his next film.

Martin’s path to a career in cutting, on the other hand, was much more conventional – right down to attending NYU film school. That said, she too got her start in the documentary field – and a lucky break when she went to interview for an internship, as the production company’s editor just so happened to have left the week before. Still in college, she ended up working on a PBS series about Beckett. Which led to her building essential skills and subsequently collaborating with Ang Lee on his first three movies. Tangcay wondered whether there’s been a “shift” for her over the years. The editor noted that it was only after cutting The Fighter that she tended to get calls for dramas (whereas before it had been mostly black comedy). Now, however, it’s sports movies. While still preferring dramas “with comedic elements,” she considers herself fortunate to have been able to try her hand at so many different genres.

As for Lederman, though she studied art in college she knew nothing about production design or film. She happened to sign up for a film class as an elective course, began interning as a PA and fell in love with the art department. She climbed the (heavily male) ranks from prop master, to decorator, to production designer. Recalling the early days, she brought up working with Tupac on the set of Above the Rim, where she first met Mayhew. Her job was assistant prop master to a prop master who kept “fiddling around,” prompting the ire of the legendary rapper/actor. To calm things down she stepped in to help out, specifically with the “rolling of the blunts.” “White girl knows how to roll blunts!” Tupac exclaimed, and they were friends from that day on. The moral of the story? “You have to have skills.” Lederman learns something new on every project. It’s why she loves what she does.

Mayhew, the child of an African American father and a white mother, seemed to be the only panelist who knew from an early age (15 to be exact) the field she’d pursue. Deciding she was a set designer, she eventually began working in theater. At SUNY Purchase Mayhew hung out with “the film people” and worked a variety of jobs on their sets, leading her to build up a skill set she hadn’t quite anticipated. It was there she befriended Charles Lane and reconnected with the filmmaker (she bumped into him at a Macy’s at Christmastime) once she had relocated to LA. Lane invited her to design on Sidewalk Stories and soon she was expanding her network, which included Spike Lee, who she’s also worked with extensively.

Bemoaning the lack of racial and gender equity within the industry, Dowad stressed that ”You have to start at the pipeline…Get people in there earlier.” Nowadays she gets more calls for women and BIPOC, but too often it’s only for “optics.” In the UK there’s actually a program in which production companies are required to have trainees (from underrepresented demographics) on every project. But she emphasized that there needs to be financial incentives, too, as folks from underprivileged backgrounds certainly can’t afford to volunteer for free.

Martin added that she actually signed with an agent because you simply can’t get your foot in the door with studio pictures otherwise, especially if you’re a woman. She’s been with the same agent since the mid-’90s, a woman who’s helped to shape her career. As for other mentors, she mentioned Tim Squyres, Ang Lee’s longtime editor. She recalled the time a cutting job opened up on David O. Russell’s first feature, Spanking the Monkey. The editor feared taking it, as Russell had a reputation for being difficult to work with. And then an assistant job on a different project likewise opened up. She decided to turn to Squyres for advice. “You should always take the cutting job over the assistant job,” he stated practically. She did, and found herself getting along just fine with the controversial director.

In addition to “being a hard worker,” and thus getting recommended for gigs, Martin also cited the Sundance Institute as “huge” for her career. Through it she’d connected with Tamara Jenkins and Miguel Arteta. For a long time, however, Martin didn’t see any women or BIPOC in the editing room – let alone as members of ACE – which is why she’s proud to be a mentor with the ACE Diversity Committee. That said, Martin herself has always hired women and people of color – not for “diversity,” per se, but just because she feels they are better able to see her perspective. She added that the paid diversity mentorship program that IATSE was recently developing could be a start to expanding the editors’ pool. Demanding equal pay – she’s thrilled studios are no longer allowed to ask about former rates – and setting boundaries were her two personal crusades. “Women are the ultimate multitaskers,” she warned, so they especially should be vigilant in taking care of themselves to avoid burnout.

Lederman brought up her first and most important female mentor, the late Thérèse DePrez (Black Swan, Summer of Sam, High Fidelity), even tearing up as she reflected on the impact the designer has had on her life. She’s tackled many different jobs on set over the years, which she believes makes her all the more well-rounded. “If it’s what you want to do, you find your way.”

The designer likewise spoke passionately about the Equity Through Design Mentorship (of which Mayhew is a member as well). She always asks to be paired with a female mentee. She reflected on feeling disrespected when she began as a prop master – a field that continues to be dominated by men. So much, especially when it comes to pay, still needs to change. Her male counterparts continue to make 10-20% more than she does, even after her nearly three decades designing. Which is why she adamantly refuses to work below her rate.

Reflecting on her time on Sian Heder’s CODA, Lederman added that she was “thrilled to see a deaf interpreter today.” Every day of production was a struggle, she admitted. The female director had to go to battle to ensure that every actor came from the deaf community, and she herself just to give the film “the look it deserved.” That said, Lederman’s dealt with far worse. “I have been on two productions where people lost their lives while just driving home,” the designer lamented, bringing up the recent IATSE negotiations and the Rust set tragedy. The Alec Baldwin incident was only the industry tragedy that happened to make the news. (Dowad noted that productions used to hire drivers to take crew home – and now they just rely on the overworked PA. “And that PA was the first person on set.” A recipe for disaster if ever there was one.)

As for Mayhew, between “Charles and Spike,” she felt lucky to have worked with men who were happy to have women on the crew. Though she and Lee have had their differences, the designer nevertheless admires how the auteur runs his set – everyone is treated equally, everyone is held to the same expectations. Even though “he’s tough, not sweet,” Mayhew learned a lot on Lee’s productions. She now sees it as her “duty” to give back and bring others in. Originally invited into the Academy to expand its diversity, she’s on a mentorship committee and is focused on reaching high schoolers (as not everyone has the luxury to attend college). It’s important to “know your talent” and stick with it (she herself has turned down projects outside of the design field even when she didn’t have work), but also to “be kind and generous.” The key to keeping both your equilibrium in a chaotic industry, and also those relationships that ultimately lead to a long and fulfilling career.