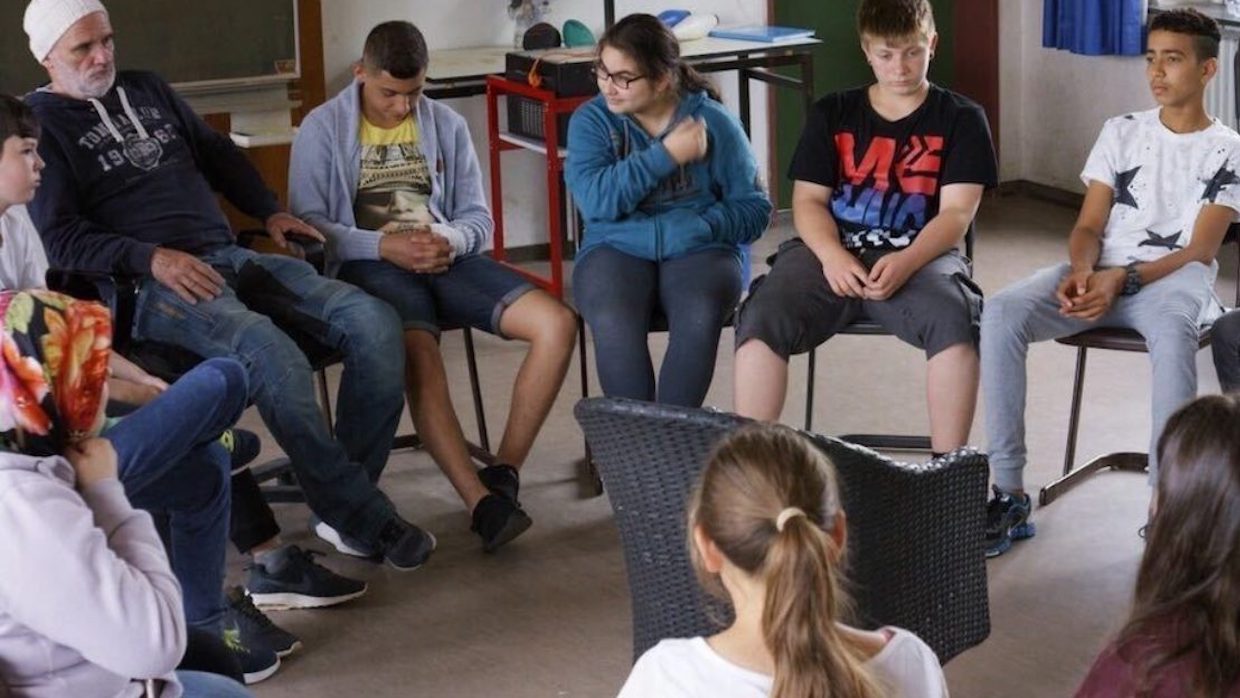 Mr. Bachmann and His Class (courtesy of Madonnen Film)

Mads Brügger’s feature directorial debut, The Red Chapel, took a Tom Green-via-Sacha Baron-Cohen approach to infiltrating North Korea, with the director finagling himself and two comics — both adopted from North Korea, one with spastic paralysis — into the country. Given that it’s not hard to make an actual absurd environment appear absurd on screen, he emerged with fairly pointless cringe comedy: plenty of awkwardness all round but no real surprises. So it’s interesting to hear Brügger admit at the start of The Mole (initially a three-part series, shown at DOC NYC in its presumably final two-episode form) that The Red Chapel, while an international breakthrough for him, was essentially a failure in terms of producing new information. Since then, the documentarian provocateur and investigator has had a long-standing itch to uncover something truly new about Pyongyang.

In American Dharma, Steve Bannon tells Errol Morris he was inspired to start his filmmaking career in part by The Fog of War; The Red Chapel bred a much better inadvertent consequence in prompting retired chef Ulrich Larsen to see if he could do more. He started small by infiltrating the Danish chapter of the Korean Friendship Association—a collection of largely elderly cranks that is, as Brügger says, a “fairly depressing group of people.” The director knew of Larsen’s one-man operation but declined to get directly involved until such time as more dramatic findings might emerge. That came when Larsen became increasingly familiar with Alejandro Cao de Benós, a Spanish businessman with direct ties to the North Korean regime. Tasked with funneling money into the cash-strapped government via illicit means, Benós asked Larsen to find him investors. That’s where Brügger meaningfully intervened: setting up an elaborate entrapment scenario, with a former coke dealer playing, for dangerous stakes, a phony businessman named “Mr. James” willing to invest in a proposed meth-and-weapons factory to be built in Uganda.

Unlike previous films, Brügger plays it largely straight, eschewing flavorful digressions in favor of focusing the impressive receipts obtained during this decade-long sting: Larsen and “Mr. James” were given, among other things, price sheets for SCUD missiles. In addition to Benós, North Korean officials and Ugandan intermediaries, there’s also a Jordanian businessman brought in to handle the shipping logistics. The effect is of an unbelievably depressing John Le Carré novel: a tangled network of charmless men conduct parodic spycraft around the globe, mostly in lingua franca English, inevitably opening every conversation with some insincere variant of “Good to see you again, my friend.” The Mole acts as a synthesis of Brügger’s previous investigations in Red Chapel and The Ambassador, in which Brügger went to great lengths to prove that it’s not hard to practice corruption in nascently formed African countries with no working infrastructure. That did nothing to address first causes and isn’t particularly politically helpful; I’m more impressed by the investigative results yielded in Cold Case Hammarskjöld and here, and I am enjoying Brügger’s evolution from performer willing to endanger themselves (as a bit) into an increasingly morally urgent journalist with the resources and recklessness necessary to carry out his preferred modes of investigation.

Longitudinal nonfiction is taken to another kind of extreme in Jon Alpert’s Life of Crime 1984-2020. I’ve never seen another film by veteran documentarian Alpert, nearly all of whose work has aired on HBO (which airs this on November 30) and served as an inspiration to the Safdies, who cite 1989’s One Year in a Life of Crime as a key reference point, both for them in general and specifically for Robert Pattinson in Good Time. Shot over nearly the entirety of Alpert’s career to date, this Life of Crime presumably gives a fair taste of his style and MO. Compressing 36 years into two hours proves predictably devastating not just in the visible passage of time but in the fates of his three main subjects, two men and one woman who occasionally form a love triangle. Their true bond is addiction — though, per the title, there are a number of covertly-shot shoplifting scenes early on, the real mediating force is heroin. The opening title card/trigger warning cautions about scenes of drug use (needlephobes, stay away) and death, and the film is something of a prolonged wait for the grimly inevitable. (Heroin: it’s bad.)

Alpert’s tough-minded presentation of his never-seen, behind-camera persona is admirably un-self-serving: he’s constantly heard asking questions off-camera, most neutrally curious, almost never intervening or chastising. This is a deliberate editorial construction; in a recent interview, Alpert says, “What you don’t see is that for every crime I’ve filmed, there are ten times I took them to rehab and tried to get them to do the right thing.” But onscreen, Alpert is relentlessly arm’s-length in service to a long grim slog through multiple incarcerations, sobriety stints and relapses. All this is scored to counterintuitively perky, folksy-harmonica-heavy music by Residente, a counterpoint musical effect that’s apparently a new element; in that same interview, Alpert asks the interviewer what they think of it. The effect is a slight underlining of the gap between the quasi-archetypal title and roles the subjects initially think they’re playing (scrappy survivors living lustily on Newark’s mean streets) at obvious odds with the grim reality that plays out, complete with COVID coda.

The Silver Bear winner at this year’s Berlinale, Maria Speth’s Mr. Bachmann and His Class distills scenes from the last six pre-retirement months of the title teacher’s final semester into three-and-a-half-hours. This is relatively economical, as Speth says an earlier cut ran a solid 8.5 hours and the film zips by. The widescreen frame announces the intention of artfulness even before the lights dim, and the lovely opening confirms it: a montage of Stadtallendorf, where Bachmann teaches, waking up. Cafes dole out baked goods to sleepy students who fill up busses en route to their full schooldays—a collective morning routine, beautifully shot, setting the stage for a work that’s clearly coming from a celebratory perspective.

I have more issues with authority than most, and increasingly think of my elementary school time as structured by rules revealed, in retrospect, to either be about legal liability (no running in the hallways!) or teaching kids to obey whatever supervisor is around, no matter how stupid, to prepare them for future employment. So I automatically bristled at the opening introduction of the classroom itself, as students march in silently and remove chairs from their desks, only to be told by the as-yet-unseen Bachmann to go back out and do it again because one of them has talked. And my classic-rock aversion kicked in as it became clear that one of Bachmann’s ways to rap with the kids is to do his very own School of Rock, assigning children variously to drums, guitar and backup vocals so he can run through “Knockin on Heaven’s Door” during a parents’ day visit.

But the film isn’t aiming for critique and I’m being a little churlish: Bachmann displays genuine eccentricity and absolute engagement with all his charges, who have no reason to perform for the camera when they say they love him. With students age 12 to 14, this is less dependent on “kids say the darnedest things” cuteness than the admirably specific and local challenges Bachmann faces. His students are a global cross-section of migrants, allowing the film to occasionally look like a mini-station of the European Union address. One highlight is a parent-teacher conference, where Bachmann tries to convince a Bulgarian father with almost no German to take his daughter’s aspirations to become a professional singer seriously. The daughter translates, Bachmann alternates languages, eventually she sing — the bemused dad alternates between undisguised skepticism and pleasant surprise at her vocal chops. And while the film is celebratory, it’s not myopically utopian — one girl is repeatedly upset in class and remains so regardless of Bachmann’s efforts to soothe her. Rarely do I see something so long go by so fast by means that are imperceptible to me; if it felt a little unsubstantial, that’s a paradox for me to work out.