On Screwball Comedy, Making it Work in the Master and Queer Love Stories: Writer/Director Maria Maggenti on The Incredibly True Adventures of Two Girls in Love 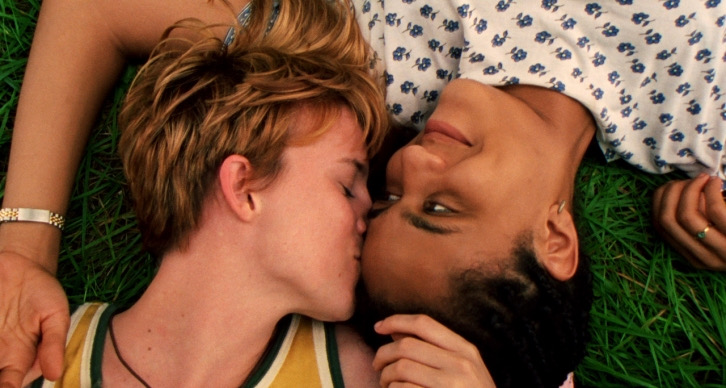 by Scott Macaulay
in Directors, Interviews
on Nov 24, 2021

With Maria Maggenti’s 1995 picture The Incredibly True Adventures of Two Girls in Love now in rerelease from Strand Releasing, we’re reprinting our 1995 print issue interview with Maggenti, who has gone on to write and direct Puccini for Beginners, write Before I Fall, and write and write and produce for series such as Motherland: Fort Salem and Supergirl. The Incredibly True Adventures of Two Girls in Love is currently screening at New York’s Metrograph, where Filmmaker‘s Scott Macaulay will be moderating a conversation with Maggenti and Hall on November 24. The below interview has been lightly reedited to add information and update to Filmmaker‘s current style guide.

A few years ago, Maria Maggenti, who at the time was performing AIDS activist work with ACT-UP and making political film and video pieces, decided that she wanted to make narrative features. She put together a letter asking friends and colleagues to support her enrollment at NYU Film School, promising to create the realistic and engaging stories of gay and lesbian life that were missing from multiplex screens.

With a fidelity that would impress any disgruntled investor in an indie film limited partnership, Maggenti attended NYU and, the summer before finishing, wrote and, along with producer Dolly Hall, filmed a debut no-budget 16mm feature, The Incredibly True Adventures of Two Girls in Love. Starring Laurel Holloman and Nicole Ari Parker, it’s the tale of two high school seniors finding young love while navigating class divides as well as the homophobia of their small town. Maggenti and Hall sold domestic rights during post to Fine Line, and then in the winter premiered the film to great acclaim at the 1995 Sundance Film Festival where they sold foreign rights to Miramax. Six months later, the film began platforming across the country.

The film’s success, however, can’t be ascribed to any sort of mainstream “lesbian chic.” (Witness the recent disappointment of Orion’s Bar Girls.) Rather, Maggenti’s film is a genuine crowdpleaser. Despite the usual time and money pressures involved in no-budget filmmaking, Maggenti has made a film that cleverly updates screwball comedy conventions with a freshness and vitality lacking in most Hollywood product.

Filmmaker: In the writing of Incredibly True Adventures…how aware were you of certain genres – the screwball comedy, the coming-of-age teen film, for example – and how did your thoughts on these genres influence the screenplay?

Maggenti: Well that’s funny, I’m not a film person at all. I’m clueless, I don’t watch a lot of movies.You know, I wrote the script in eight days. I thought to myself, where did this come from, and realized – What was my cinematic diet when I was growing up? It was like the AFI, the American Film Institute in D.C. My mom would take us on the weekends and I saw all the screwball comedies, every Capra film, all the Thin Manseries, everything with Barbara Stanwyck, Bringing Up Baby. So something in me clicked about how all that functions. I didn’t make a conscious effort to make it a screwball comedy.

Filmmaker: Incredibly True Adventure is a crowdpleasing film, and I don’t mean that in any kind of condescending way. It’s got a quality that you can’t bottle. You can go to the multiplex and see half a dozen films this summer that won’t hit those beats or prompt that kind of identification.

Maggenti: When we first started getting the footage back I was horrified because it was so much more open and emotional and tender and I was like, “Yikes, I don’t want anyone to know that about me. I’m like a tough woman, and I have a dark side!” Maybe three pictures from now it’s going to come out more because this film really captured all that first love kind of stuff. People really do get into that whole hilarity of it. Part of me watches it and thinks, you’ve got to be kidding. I mean, I can tell you what’s going to happen here and not because I saw it a thousand times but because it’s the most conventional set up. Mother goes out of town, girl invites other girl over, of course something is going to happen. So it always surprises me when I sit in those audiences and that door opens and Evelyn’s bag comes flying in and everyone goes, “AHHHHH!” I guess on some level it did end up capturing some quality I have in myself. I do laugh at corny stuff like that. But – and I wonder how much this has to do with the fact that it was all women in the story pretty much and it was women who made the film – there’s this tendency, and especially when dealing with the press, that treats me as if the film is not a film but a “filmette.” “Cute” and “light” and “fresh” – all those kinds of adjectives actually belie a certain kind of condescension, a kind of patronizing quality that I find myself sensitive to and not in a way that is upsetting but in a way that’s interesting. Because to me, of course, the film up-ends all these stereotypes. And again, part of it is who I am as a person – a very serious politicized person who made a movie that is not what you would expect me to end up making, considering I did all those how-to-upset-your-mayor-in-your-own-town kind of movies [previously].

Filmmaker: What was the hardest part of making this kind of naturalistic comedy with no money? I always find that on no-budget films when you’re doing something that’s straight and realistic, it’s the hardest thing. Every detail has to be true-to-life. Being more experimental can sometimes give you more leeway to get away with stuff.

Maggenti: The hardest thing was not having any coverage. I had to figure out how I could create energy in the frame. I didn’t have time for lots of set-ups. We were doing 21 setups, seven pages a day and all our locations were gratis which meant I was on very tight deadlines. We never worked over 12 hours. So trying to figure out how to get something across in a master shot that would not then move in for a close-up or any kind of over the shoulders or cutaways was my biggest challenge and my biggest fear about it seeming like a low-budget film. Now thanks to Tami [Reiker] and Melissa [Painter], my two different DPs, I think we were able to ride through. There’s a lot of high angle, there’s a lot of dolly shots – things so people don’t actually know they’re looking at a “one shot.” I knew every dramatic beat in the script so when I was told on a number of occasions, “We only have 20 minutes, you’re going to have to do it all in one shot,” I was able to on the spot then consider how I could shoot it. The biggest example is when Evie comes over to dinner and I end up in that single shot: we pan up from the floor and Randy and Evie are standing next to each other and the family is crossing frame. Well, that was originally a four page scene with lots of coverage and then Dolly came in and said, “We’ve got to be out in 20 minutes. You’ve got to do it in one shot.” That was really painful to me. I was attached to what that coverage was going to be. I thought to myself, all right, what’s the purpose of the scene? The purpose of the scene is to get across how Evie feels in this house and how different this house is than her own. What’s the best way to do that? Show her face and we’ll let the adults fade. We’ll let them become blurry. And that’s what we did and people tell me afterwards, “Oh I loved that scene where she comes to dinner. I really understood how she felt.” Sometimes in a way it’s better not to have all the resources because you do have to think lean. You have to know exactly what the point is.

Filmmaker: You started this right around the time that Rose Troche’s Go Fish was in the theaters. How did the film and it success affect you on this project, both creatively and in terms of people’s receptivity to the film?

Maggenti: That had a huge impact on me. When I first saw Go Fish, which was at a press screening before it was released, I was thrilled to death. This was before I had written Incredibly True Adventure. I was struggling with a more melodramatic, tragic script and I walked out of that screening thrilled. I was thrilled for two reasons. One, because it seemed like a film that had an original voice. Not that Claire of the Moon bullshit that just throws those lesbian characters up on the screen and hopes for the best, but really a voice. And the second reason was purely personal. I could relate to all the characters. I felt like, “Oh my god, I wore those exact cut-off jeans and t-shirt with belt and high tops three summers ago,” so I identified with it. Subsequently when the script was finished and I began to do the little knock knock on the producers’ doors, I don’t think distributors would’ve expressed so much of an interest in this project had it not been for Go Fish.

Filmmaker: Many New Queer Cinema films distrust some of the conventional narrative strategies that you kind of embrace in your film. Were you influenced, either positively or negatively, by the style of those films?

Maggenti: Well, certainly, I think that the whole way that Rose wanted to use film to tell her story is much more expansive filmically, more experimental than mine was. I did go through many trials when I began to develop the script and I felt as if I were almost anti-intellectual, as if I were almost letting down the legacy of queer cinema, but what it comes down to really is the individual voice and for me a beginning-middle-end kind of story that never breaks the fourth wall, with characters that you can really sink your emotional teeth into, that’s just how I am.

Filmmaker: There are customarily two ways of marketing independent films: starting small, creating a unique, original identity for the film, and building from a niche or art-film audience, or else positioning the film as “mainstream entertainment” straight off the bat and maybe glossing over the edgier aspects of the work. Independent filmmakers often complain that their films are ghettoized but in your case it seems like Fine Line is trying to present a very mainstream image for the film.

Maggenti: I think it’s a broader [marketing strategy], yeah. I have big arguments with them. They have to remember that gay people live in a straight world, so that niche audience lives already in two places. Of course you’re going to target your core audience but you have to know also that they live in the rest of the world, so that’s the other place that you reach them. Especially for closeted people, you can’t reach them through gay press or gay advertising. You have to reach them where they live which is maybe at home with their mom, right? And that means, for mainstream people, advertising the film for what it is, not pretending it’s something that it isn’t.