Bill Murray and Me 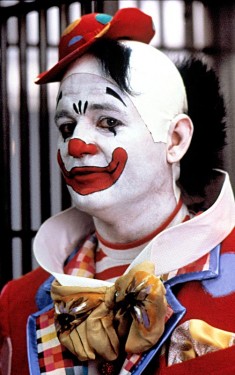 Bill Murray doesn’t do many interviews, so even if it wasn’t kind of awesome, Dan Fierman’s interview with the actor in GQ would be a must read. Fierman covers a lot of ground, particularly obsessing over Murray’s sole directing effort, the massively underrated Quick Change, so I don’t think I’m spoiling anything by quoting here the last exchange between the two:

Last question. I have to know, because I love this story and want it to be true. There have been stories about you sneaking up behind people in New York City, covering their eyes with your hands, and saying: Guess who. And when they turn around, they see Bill Murray and hear the words “No one will ever believe you.”

[long pause] I know. I know, I know, I know. I’ve heard about that from a lot of people. A lot of people. I don’t know what to say. There’s probably a really appropriate thing to say. Something exactly and just perfectly right. [long beat, and then he breaks into a huge grin] But by God, it sounds crazy, doesn’t it? Just so crazy and unlikely and unusual?

In thinking about Murray’s not-a-denial, I was thrown back in time to my teenage years. I was about 15 or 16, and my high school journalism class was traveling by bus from Bethesda, Maryland to New York City, where we were to attend a high school journalism conference at Columbia University. We stayed at the Barbizon Plaza, and in the evenings, our teacher, whose name (Regis Boyle) I still remember, led us on tourist-y treks through mid-town New York. One night she took us to Radio City Music Hall, where we saw a movie (I’m thinking it might have been You Light Up My Life), and then walked us back to the hotel. Of course, all of us just wanted to split and explore the city on our own, but for the early evening at least we were stuck with the group. Anyway, on the way back from Radio City our teacher decided she had to show us the Plaza Hotel. She marched us into the lobby and in a loud voice started playing tour guide. Here we were, trying to be cool kids in the big city, and here she was, blowing that cool by strutting around, pointing out the portrait of Eloise, and lecturing us on the history of the different rooms. While I was affecting my best “I’m not with this woman” posture, I suddenly heard commotion from my classmates behind me, and then a male voice took over the tour. It was Bill Murray, who had only recently joined Saturday Night Live. He started mimicking our teacher, walking alongside her as gave his own little embellishments on the history of the Plaza. We were laughing so hard, half at Bill and half at our teacher, who, having no idea who this guy was, was getting more and more flustered and angry. Then he grabbed one of the girls, headlocked her and started giving her a noogie. By this point everyone was screaming and with that he abruptly walked away.

So, yeah, I believe that story.