The Kybalion: A Strange Journey from Short Form to Feature 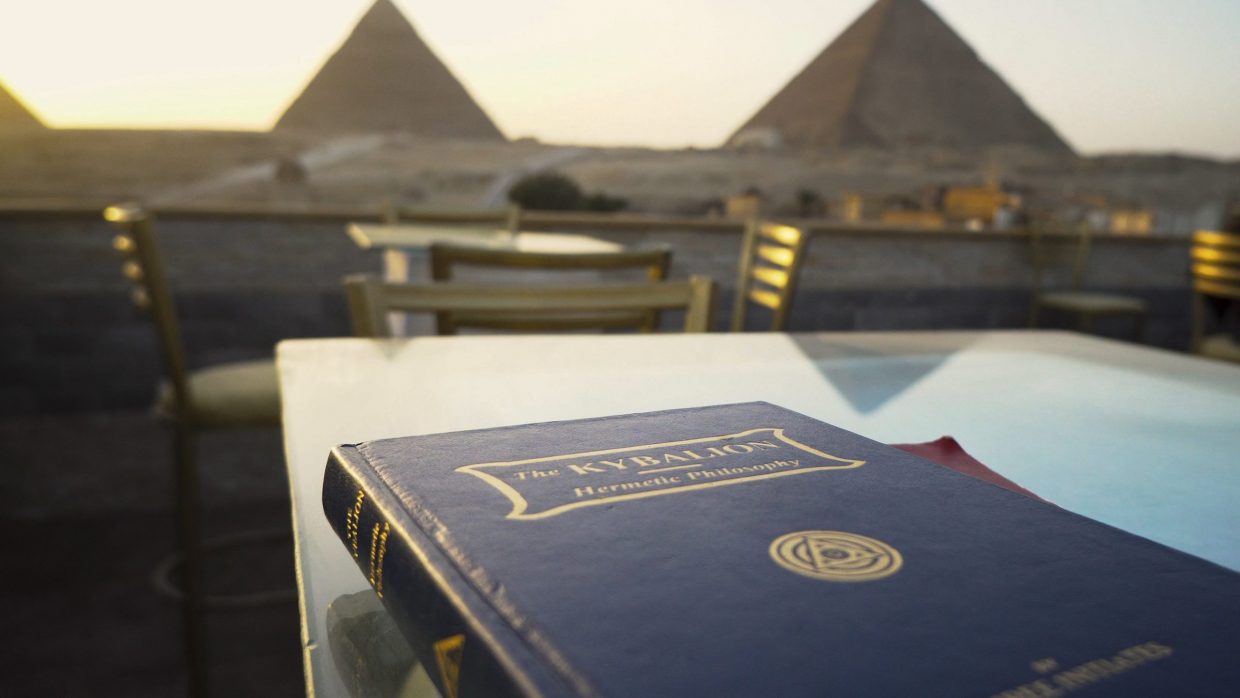 The Kybalion in Giza

Standing at just 5’6”, I often jokingly refer to myself as “Ronni Thomas. Short, filmmaker….” But in all honesty I am part of a very small demographic of film makers who prefer making short-form docs, most of my films being between four and 20 minutes. Nowadays, what could be a compelling 30 to 40-minute masterpiece is typically and unnecessarily stretched out into six one-hour long episodes across several seasons. So, a few years back when my friend and long-time collaborator, Mitch Horowitz, came to with me with a proposition to direct a feature-length adaptation of a 1908 occult manuscript, The Kybalion, I was torn. The subject matter was intriguing to me: seven principles of ancient hermeticism for the modern world. But in 15 years, I’d successfully side-stepped doing long-form to avoid being married to one particular topic for too long a period of time. But when the film’s investor offered me full creative control and a decent budget (something any independent filmmaker can appreciate) and under the guidance of Mitch, who is a genius at distilling down esoteric concepts, I agreed.

So, there were several problems I realized I was facing. First, The Kybalion is a book of complex philosophies that we needed to expand visually. How does one take a concept such as “As above, so below,” or, “The universe is mental,” and translate its deeper meaning for the screen? The second challenge was the expectation of the culture behind the book itself, one that is held in the highest esteem to students of the occult and other new age disciplines. I was coming in with a very basic understanding of the book’s principles (I give Mitch many thanks here for putting the book’s message into “plain speech”). And then there was Egypt.

I knew I wanted to set much of the film in ancient Egypt, as that is where hermeticism has its roots. And so, on only a hunch, Mitch and I set off to Cairo, Giza and Luxor armed with only a small camera and a carry on…. During an unexpected Egyptian pilgrimage…. The advice I will give anyone here looking to shoot in an unfamiliar and volatile environment is to do a ton of research. And get a guide. For 15 years I’ve grabbed my camera and went. That formula does not work in Egypt. There are a lot of bribes and more gift shop tea than anyone would ever need. As soon as I put my camera up, I was asked to put it down, then asked to give a small bribe, then quickly interrupted again for more bribes. In the end, we were able to get some good material in Egypt, but not a feature film worth by any stretch….

And so we returned to New York with about 10 minutes of useable material, and now we needed the other hour. The good news however was our misadventure in Egypt was surprisingly inexpensive so I still had what I considered a decent amount of money left.

Backing up, let me explain a little bit more about the book. The Kybalion is an occult manuscript penned in 1908 by a mysterious author named “the three initiates.” It presents seven principles, each one with an enigmatic axiom preceding their descriptions. These principles are meant to teach the reader how to glean power and influence over the universe and the world around us by transcending space and time. The overall concept is that idea that the power of the human will has causative properties. I took this to extend to all areas of the supernatural: psychics, mediums, past-lives, tarot, etc….

Every struggling artist has that moment between crippling self doubt and the moment of realization. For me it was sitting at a seance in my living room. The attending medium was explaining her process of gaining access to the spirit world as a series of vibrations that are used to make contact. Now, one of the seven principles is The Principle of Vibration, which is a widely held thought that all things we experience are simply “frequencies.” So this changed everything…. Here it was I had seven principles. And each principle had its outer meaning and inner meaning. This would be a feature film of seven short films! Just like that I was in business. I could see it clearly as a feature, but my approach would be to treat it as a series of shorts that we would string together — seven short films that would begin with Mitch describing each of the seven principles and then go into an interview with someone working in the world of the occult that somehow ties back to that principle.

But, even though my approach to the process of making the film was seven short films, I didn’t want it to seem that way to the viewer. That wasn’t the challenge I’d wanted for myself. I deeply wanted to do something different than I had done before. And so as a sort of abstract glue to stitch the film together I decided to create an otherworldly series of vignettes that would take us on a visual journey through each of the sevenprinciples. I teamed up with my dear friends Shane Morton and Madeline Brumby and their effects studio (Silver Scream FX Lab) along with graphics genius Vince Rose to create these strange, abstract sequences I dubbed “The Alchemical Wedding.”

Over the next few years, I would share rough edits of the film with its investor whose perplexed expressions gave me the sense that he was thoroughly confused, but I knew I was on the right track. I assured him that when the film reached its final completion, it would be perfect. Like Alchemy. Principle two of the Kybalion. So, almost two years from our adventure in ancient Egypt I had a finished film. One hour and fifteen minutes. And I was proud to share it with my producers. I still think they were a bit perplexed but agreed it was a worthy adaptation of the text written over a century ago.

In mid-2021, The Kybalion was acquired by Random Media for worldwide distribution and the film was released today, January 11 2022, on most streaming platforms. While I still do prefer short content, this experience left me wanting a bit more, and, most importantly, it pushed me out of my comfort zone in a way that was nonetheless comfortable for me.