Western Promises: The Power of the Dog Composer Jonny Greenwood 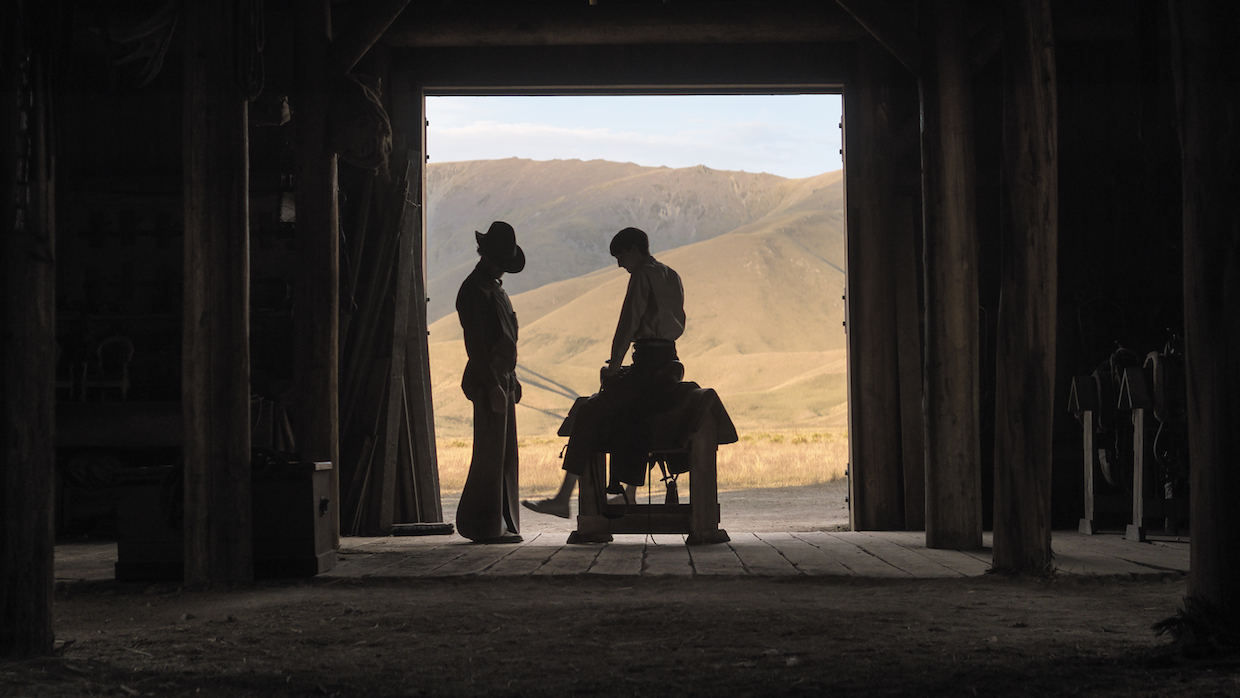 Jonny Greenwood, The Power of the Dog, Winter 2022

Wailing French horns, recorded in the vastness of an Oxford cathedral; the mechanized sputtering of a player piano; the anxious propulsion of an ascending and descending cello, defamiliarized by being plucked like a banjo—these are some of the seemingly counterintuitive approaches composer Jonny Greenwood took to scoring Jane Campion’s brooding and suspenseful Western, The Power of the Dog. But just as Campion’s film, set in the early 20th century, tacks away from genre signifiers to tell an unexpectedly intimate tale of fraternal rivalry and stifled desire, so too does Greenwood’s score subvert the expectations of a “big sky” Western soundtrack to arrive at something both more truthful and invitingly odd.

“There’s a weird sort of romance going on in the film, in a strange, slightly aggressive and repressed way,” says Greenwood. “So, it was getting that balance right and not just being about darkness and cruelty.”

Many of Greenwood’s scores—which include There Will Be Blood, Phantom Thread and another ’21 release, Spencer—have been celebrated for their engagement with 20th century classical music ideas and approaches. (Greenwood has cited composers like Stravinsky, Penderecki and Messiaen as inspirations.) But just as important for his soundtrack work are Greenwood’s dedication to a specific creative workflow and his identity as a composer and performing musician. With Radiohead, his playing includes not only guitar but keyboards, analog synths, viola and less well-known instruments like the ondes Martenot. A composer and arranger who is deeply involved in the recording process, he anticipates and makes use of the creative energies of his individual musicians.

“A lot of times, people get used to the preset on their Kontakt Player and Library, and they think that’s what a violin sounds like, but the real thing is far more varied and complicated,” Greenwood says. “Over the years I’ve learned that what you put on paper can be done an infinitely varied number of ways on the day, and it’s quite easy to just get players to suggest or try things. It’s the start of the process, really, handing out the paper at the beginning.”

Greenwood continues, “When I’m writing a score, writing on paper, I’m thinking of the people that are coming. That always obsesses me, even with an orchestra. I like to find out about [the players], see their names… One player with his own playing of violin [can] get all these wild and varied sounds. Putting two or three in a room together, the complexity gets more and more multiplied, and that’s thinking about [the score recording] as a live performance. That’s how I’m always focused.”

Striking examples from The Power of the Dog of the creative potential of live recording are the French horn cues used in some the film’s outdoor desert scenes. They were recorded in a giant Oxford church, a choice that recalls an essay Greenwood wrote for The Wire about listening to Krzysztof Penderecki’s Viola Concerto performed live. Listening to the ensemble as “48 separate sound sources,” Greenwood learned that the composer’s abstract music, typecast as “painful, simple noise,” was actually music of “whispering complexity” created in part by “the space in the room, the walls reflecting all these sounds… ” So, for cues placed in The Power of the Dog’s vastest outdoor exteriors, Greenwood recorded in his largest interior makeshift studio. Expediency was partly a factor—“It was the middle of COVID lockdown, and lots of venues weren’t allowing musicians in, especially horn players blowing into their instruments,” Greenwood says. “But the tonalities of what the horns were being asked to do would benefit from having that space and echo around their notes. We had microphones everywhere, and it sounds enormous. Indeed, the church was meant to be the third instrument.”

Much contemporary film scoring proceeds from a composer’s early demos, sometimes used as temp cues, with the composer then recording finals incorporating a few notes from the director. It’s a process Greenwood avoids, preferring instead a more iterative approach proceeding from conversation, idea sharing and the results of successive recording sessions. “You hear nightmare stories of people [delivering] demo recordings, which nowadays sound nearly as good as the real thing, then producers stepping in demanding that [the final] is rerecorded to sound more like the demo, which sounds like madness to me. Instead, it’s nice to be able to just get these groups together, record them in a variety of different colors and moods and styles, and that’s the finished thing.”

“All the directors I’ve worked with so far have used music in quite a strange way, in that it’s either in the film or it isn’t,” Greenwood says. “I’ve never really had to do underscore or worry about the music stopping for something to happen, then starting up again very precisely to a click track. The good part of doing it my way is there’s no click track quite often, so the music is just played. The bad side of it is, I usually have to write a lot more music than is needed and provide libraries of [music]. We’ll often do two sessions—a session where the [the director] will hear everything and then there will be suggestions like ’It’s a shame this isn’t faster.’ Then, we’ll go pick those things up and do extra cues as well. There’s quite a body of music, and it’s quite a long process,” Greenwood continues—“weeks and weeks and weeks.”

Greenwood’s engagement with The Power of the Dog came after receiving a direct email from the director: “’Hi, would you like to write some music for this film I’m about to make?’” He and Campion began writing back and forth, with Greenwood “suggesting instruments and colors to her and approaches for the music that could be different, and [talking about] what Western music traditionally is and what would be fun to subvert a little bit. Some things died a death, and some survived. The French horn was a good early idea that lasted.” Greenwood sent Campion the mechanical piano version of György Ligeti’s Continuum and, after her positive response, wrote music for the software-controlled mechanical piano being detuned in real time with a tuning key. “You can hear some creaks and bangs on the recording,” Greenwood says. “The result is that you’re hearing something you’re familiar with, but then you hear notes sliding within it, which is hopefully quite unsettling.”

Did Greenwood ever consider referencing iconic 20th century composers of the heartland like Aaron Copland? “Copland’s is beautiful music, but some of it sounds quite like a celebration of the landscape. I was more interested in how wretched Peter (Kodi Smit-McPhee) feels when he goes off alone, incompetently riding his horse through the desert and finds the dead cow. There’s not so much romance in that, and I thought the French horns would be perfect.”

With a new album from side project The Smile, with Thom Yorke and Tom Skinner, on the horizon, aside from whatever Radiohead may decide to do in the future, Greenwood is happy with his current manner of scoring films. “I had the option a couple of years ago to get a team, or even someone to come in and help and take on more [work]—to become, you know, ’that guy.’ But being responsible for other people, not scoring, or getting someone else to do the arrangements—I’ve tried it once or twice, and it just feels like someone else is having the fun. I don’t think I’m set out to do that.”

So, collaborations with directors like Campion will remain the ideal. “It’s funny: She was always very keen to tell me she’s not musical and ’doesn’t know,’ but then she responds very emotionally to things, which is lovely. And she was very trusting and assumed that all my grand promises in those first emails were actually going to come true. You end up wanting to do your best for her as a result of that, you know?”