“Capturing the Scale of the Amazon Rainforest Is an Impossible Task”: DP Alex Pritz on The Territory 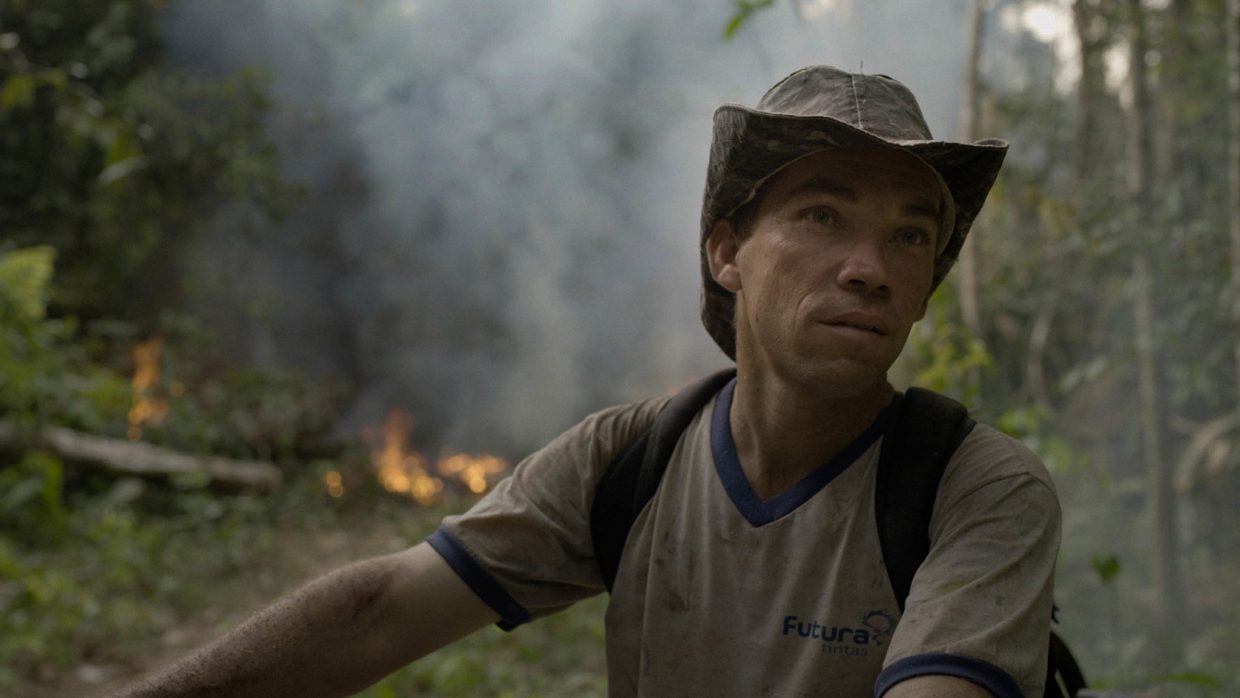 A still from The Territory

The Territory takes viewers deep inside the Brazilian Amazon, allowing them to bear witness to the ongoing conflict that has pitted Indigenous inhabitants against settlers looking to capitalize on the land. The film captures a pair of young leaders and their mentor, who defend the land with their lives, as well as settlers hoping to establish their own homestead, including those who engage in clear-cutting on their own. Director-cinematographer Alex Pritz explains how the film’s visual style distinguishes the different perspectives, his collaboration with an Indigenous cinematographer, and how his crew unexpectedly found themselves recording a settler burning down the rainforest.

Pritz: As a director-cinematographer, the relationships behind the camera are extremely important to me. I knew I wanted to have small teams, and often it was just myself and a producer shooting. I love being tied to the image-making process in a hands-on way and wanted to be involved in shooting this film from the start. I was also extremely lucky to be able to collaborate with my co-cinematographer Tangãi Uru-Eu-Wau-Wau, who led the filming of scenes involving the Indigenous community, especially during the pandemic. Tangãi’s sensitivity and artistic instincts brought the film to a new level of intimacy, and I’m deeply grateful for our collaboration.

Pritz: The protagonists of our film see the rainforest in very different ways. Understanding these perspective differences and illustrating them through the film’s cinematography was the central creative challenge in shooting this film. For scenes involving Indigenous participants, we often shot handheld and employed a loose and fluid aesthetic on wider focal lengths. When shooting with the farmer/settlers, we would frequently switch to a tripod with a longer zoom lens to build a more mechanical feeling to our cinematography.

Our shooting also moved between the large and the small: satellite images of deforestation paired with macro photography of an individual insect. Capturing the scale of the Amazon rainforest as well as the diversity of life within it is an impossible task, but by shifting our focus between the large and the small we hoped to allude to the magnificence of this particular landscape.

Pritz: The biggest challenges were always in finding ways to effectively communicate the situation at hand in an honest and straightforward way while discovering the hidden gem within each scene that pointed towards a larger, more elusive truth. We knew we had a moving story being driven by passionate, compelling characters in a visually rich environment. Beyond that, we wanted to tell a story that could provide contours—however vague—to the big abstract ideas of Manifest Destiny, or settler colonialism. Finding a visual language that could help us convey that remained the central challenge of the film.

Pritz: We shot on a Sony lineup, beginning with an FS7 and ending with the FX6/FX9, as well as the Sony NX-80.

Pritz: We relied almost exclusively on natural light for this film but used windows, blinds, and door frames to help shape the available light. By shooting with full frame cameras on the FX6 and FX9, both with dual iso, we were able to maintain texture even in scenes with low light.

Pritz: The most difficult scene was by far the scene of farmers burning the rainforest. After hiking dozens of miles into the rainforest we were totally unprepared to be shooting anything involving fire until we saw somebody running down the trail with a burning branch. We couldn’t turn away, or safely stop anybody from burning, but it was an emotionally and physically difficult scene to shoot.

Pritz: Across all cameras, we shot in Sony’s slog3 profile, which was important to maintaining a consistent color palette over many years of production. We knew we wanted to visually distinguish the forest from the frontier and worked with the fantastically talented colorist Seth Ricart at RCO to develop a distinct look for different characters so that when an audience lands in an establishing shot they instantly understood which side of the story (and which perspective) they were entering.