“We Had a Remarkable Number of Catastrophes to Navigate”: DP Rita Baghdadi on Sirens 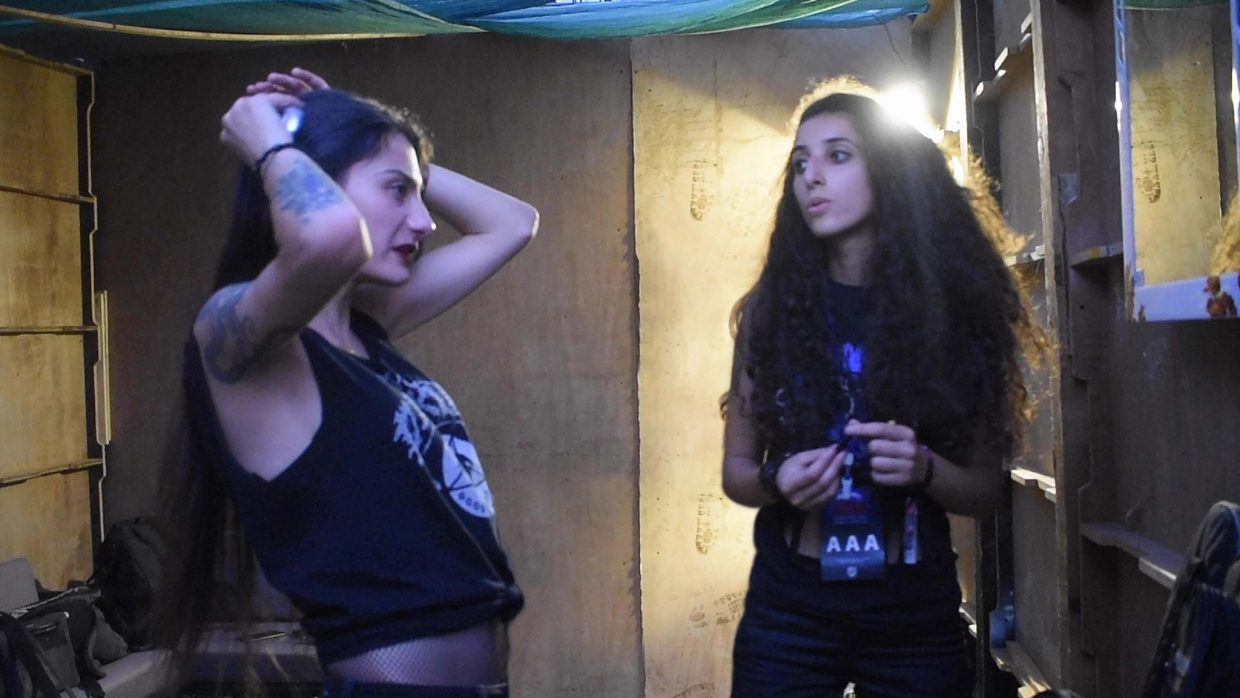 The subject of Sirens, Rita Baghdadi’s third documentary feature, is the all-woman Lebanese thrash band Slave to Sirens, who are captured here against the unrest that has shaken Lebanon in recent years as well as in performances, including one at the Glastonbury Festival. Baghdadi recalls the difficulty of capturing sufficient footage at the festival and how she turned a film about a band into a film about being in your twenties.

Baghdadi: My vérité directing style is closely connected to me being behind the camera, and I like to keep my team small so I can move on instinct and not disrupt a moment. It’s all very intimate, but it can also be demanding. I haven’t met many other cinematographers who are willing to hold the camera for as long as I do.

Baghdadi: With Sirens I knew I wanted to frame it as a coming-of-age film. I wanted it to be as immersive and intimate as possible so that audiences could feel close to these young women. I wanted the storytelling to highlight the ecstasy and agony of being in your twenties and feeling invincible, yet with seemingly impossible dreams. I knew I would have some moments where I wanted to see all five band members in one wide frame, but as the film focuses on Lilas and her inner struggle, my camera always landed in a close-up of her face.

Baghdadi: I’d say Slave to Sirens’ music was the main inspiration. But also, there’s a little homage to Celine Sciamma’s Girlhood in the film. And Wong Kar-wai’s In the Mood for Love is always in the back of my mind.

Baghdadi: Between economic collapse, revolution, electricity shortages, pandemic, the explosion, and more pandemic, we had a remarkable number of catastrophes to navigate during production.

The pandemic posed more challenges than just health and safety, because it completely shut down the music industry. I was trying to make a film about a band on the rise and when we started filming I had no idea that we’d have so few opportunities to capture Slave to Sirens playing live. Thank goodness my producer Camilla fought so hard to get us permission to film at Glastonbury, because that ended up being one of our only shots.

Baghdadi: I used the Canon C300 MKII because it shoots 4K, it’s light enough to film handheld all day, and it performs well in low light conditions. I’m also familiar with that camera like the back of my hand so I knew I could get the shot under any circumstance. The primary lens I used was the Sigma 18-35mm f/1.8. I chose it because I needed a wide angle that performed in low-light, and frankly it was within my budget at the time. I’ve always believed that the best tool is the one in your hand.

Baghdadi: I like to use natural light whenever possible. I’m one of those people who goes around turning off all the lights as soon as I enter a room. On Sirens, however, I wasn’t always able to use natural light because the band was most active at night and electricity throughout the country was unreliable. So I ended up carrying with me two battery-powered 12” Quasars that have magnets so I could stick them anywhere. And I brought colored gels to spice it up a bit. I also realized while coloring that we used a lot of cell phones as light sources throughout the film.

Baghdadi: Glastonbury. That festival is gigantic, I think around 900 acres, so simply the amount of ground that my sound recordist Tatiana and I had to cover carrying our gear was exhausting. And it was Tatiana’s first time camping, ever! I shot the live performance with one camera, so it was literally me sprinting from behind the stage, into the crowd, to the other end of the lawn and back again, trying to cover all the angles for each song. The festival would not allow us to bring in more than two people, so that’s just the way it had to be.

Baghdadi: I shot LOG, so the color was all realized in post by the fabulous Maria Carretero. But I knew from day one of production that I wanted the film to have a saturated, dreamy yet gritty quality, so that’s why I shot with a black pro-mist filter on the lens.