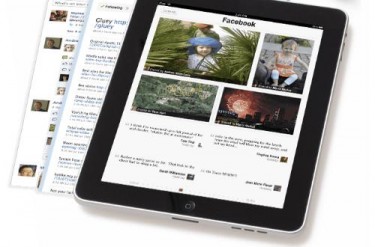 I’m finding Flipboard, a new app/web reader that launched this week, kind of cool, but I can’t tell how much I really like it yet. What Flipboard does is create on your iPad a “personal magazine,” displaying an aggregation of different feeds and channels in a design-y format. What makes it more than an aestheticized RSS reader is that it pulls in social as well, turning your Facebook and Twitter feeds into channels that you read like flipbooks. So, open the Flipboard version of your Facebook and the cover image might be a collage of Japanese movie posters that a friend linked to. The first few pages are full of news articles that can be sized-up to reveal the whole text, and along the side of the frame are comments. A few pages later and status reports take on the aura of Jenny Holzerisms as they are displayed within different amounts of negative space — even sometimes just one single tweet alone on half the screen. Tap a friend’s tweet or status update and it expands along with a new side column containing the back-and-forth of the whole thread. You can reply from within the app.

Like I said, it’s kind of cool — definitely a different way of reading what your friends are talking about, and a nice respite from Facebook’s bland, sometimes confusing, but always un-entertaining interface. That said, there’s a slight paradigm shift going on with Flipboard. I’m not a subscriber to the anti-iPad “it’s just a consumption device” argument (uh, so is a book), but it’s interesting that the company’s materials position you on your iPad as a consumer and your friends as content providers. (Yes, I know, the site says you can “share anything,” but I think the Flipboard UI is not one that inspires one to create.)

But before I sound too much like Cory Doctorow, I should say that I think that’s okay. Sometimes you do just want to read stuff, and I like that Flipboard places links and updates from my friends within a more graphically appealing envelope. But how is all this stuff aggregated? Why is one friend’s Tweet that she is eating at a vegan restaurant elevated to almost full-page status while another quoting Mark Twain is relegated to the margins? Why is that collection of Japanese poster art full-page? How does the Flipboard software decide who to elevate and who to ignore among all my Facebook friends? Is it cool that an aesthetic overlay has been placed over aggregation algorithms, or kind of creepy? (You might be able to tell that I read Jaron Lanier’s You Are Not a Gadget not too long ago.)

Robert Scobel wondered about some of these same things in a report that dubs Flipboard “a publishing revolution” at Scobelizer. He wrote:

How did Flipboard find these things? After all, I have 1,800 friends on Facebook and am following 19,000 people on Twitter and it filters out most of the noise I see on other Twitter and Facebook readers. Well, it has a set of algorithms that are looking for highly engaged items. You know, items that have lots of comments, likes, or retweets. It also has an algorithm that senses photography that’s been linked to from Facebook status messages and it lays those photos out.

Flipboard is indeed novel, but so far I’m not willing to to dub it the “revolutionary” app that Scoble seems sure it is. I don’t see it replacing the sheer functionalism of my RSS app, Reeder. And I’m still going to Twitterific on the iPad to check on my various Twitter groups. Flipboard is a pleasurable experience, but while scanning it I’m acutely aware that I’m missing stuff, that I’m not seeing the whole picture. And with regards to the selection process and the magazine metaphor, at least with a magazine, there is a person behind it, a person with a point-of-view who, for better or worse, is making decisions. What Flipboard is doing is beautifying the crowd, and while I appreciate the experience, I also know that its interface wants me to forget that that’s what it’s doing.

I wrote the above last night before going to bed. After waking up this morning and going to Flipboard, I realized what is weird (again, both in good and bad ways) about it. By abstracting and reorienting content, it’s disrupting the temporal and design geographies that we filter our data on these platforms through. Twitter, for example, is an egalitarian stream unfolding in real-time. No one tweet is prioritized over another. We accept that, and we elevate a tweet’s importance ourselves, by replying to it, or by clicking on a link embedded within it. With Facebook, we can see a status update and then the ensuing dialogue in one fell swoop. Maybe we have our own lists, and quickly scan what are best friends are up to. Now, I am not so naive as to think that their UIs aren’t shaping my experience, but I also feel that, particularly with Twitter, the organizing principles are clear enough for me to contextualize the information I find there.

Flipboard gives me a very different feeling. At this moment, it has made as its opening double-page Facebook spread a photo gallery from someone I don’t even know who attended an event last night. She is striking, but I do need to see 20 pictures of her? On the next page, a tweet given prominent placement simply reads “so thankful.” (Tapping on it reveals a comment thread, but I’m still unable to figure out what my friend is thankful for.) A pregnant friend tweets that’s she almost ready to deliver. This is jammed up next to a woman hugging her dog. At times, Flipboard does feel like “your magazine” — edited by William Burroughs or Brion Gysin. The one thing that a magazine does — create context and correspondence through a careful evaluation of material — is the very thing that Flipboard’s cleverly algorhythmic approach can’t convincingly do yet. Yes, it can add prominence to things that everyone is linking to at the same time, but as Lanier points out in his book, the crowd is not always wise.

Perhaps this will be different in a future version of Flipboard. At Scripting, Dave Winer considers the app in a post entitled “About Flipboard and reading surfaces.” He writes:

With no disrespect, Flipboard is a scraper. It takes content flows that weren’t intended for this kind of presentation and repurposes them. How could they do otherwise, it’s a chicken-and-egg situation. Right now there is no content that is specifically designed for a Flipboard-like environment. But now that their product exists, it seems we have one half of the puzzle in place, why not put out a proposal to the content tools vendors (of which I happen to be one) and say this: If you want to produce content flows that look beautiful in our environment, here’s how to do it. Let us either put hints in our source code for you, or create new renderings of our source code specifically to be viewed in the new environment.

All of this said, Flipboard will stay on my iPad. If you have an iPad, it will probably make it’s way to yours too. (Indeed, this morning my Flipboard channels wouldn’t refresh due to server overload.) I’m curious whether what seems elegant and artful now about it will seem clunky and generic in several months time. Or not. Stay tuned.

UPDATE: In the post above I referred to RSS but after reading this Gizmodo piece, “Is Flipboard Legal,” I learned that Flipboard doesn’t use RSS at all. It “scrapes” content directly from the web pages linked to and it caches entire web pages so that when you click on the “read on web” links in Flipboard the pages comes up almost immediately, without a lag. But because it doesn’t pull from RSS feeds, Flipboard’s model raises ethical and copyright questions regards to the re-purposing of content creator and publisher’s work. Read the Gizmodo piece for a good discussion of these issues.