“We Joke That This is a Pre-COVID Movie Made from a Safe Social Distance”: Paweł Łoziński on his First Look Closing-Night Doc The Balcony Movie 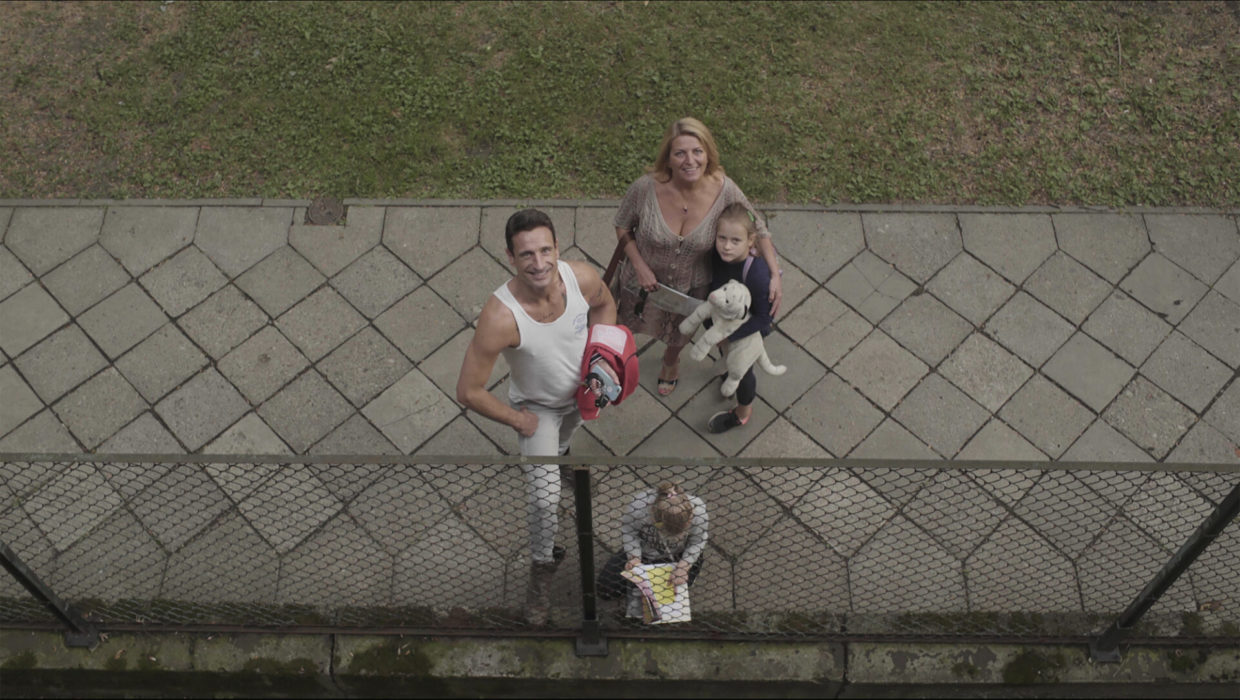 by Lauren Wissot
in Directors, Interviews
on Mar 18, 2022

As its title implies, Paweł Łoziński’s The Balcony Movie, which closes this year’s First Look Festival on March 20, is a film shot entirely from a balcony. Which may sound like the worst elevator pitch of all time until one realizes that the balcony belongs to the acclaimed Polish documentarian behind the lens (who also happens to be the son of also esteemed Polish documentarian Marcel Łoziński). Less concept film than “secular confessional,” as the Warsaw-based director puts it, Łoziński spent over two years (beginning pre-pandemic) filming the many men and women of all ages, not to mention their dogs and kids, who passed in front of his apartment building. And not just coldly observing, but warmly engaging in earnest conversation with those below, from a homeless stranger to his own ticked off wife. (“What’s the meaning of life?” he shouts to one elderly woman in a wheelchair. Her sly reply? “Life is meaning.”) It’s through these random interactions that Łoziński unearths a vast array of future hopes and past regrets, while we the viewer likewise learn quite a bit about the viewer holding the camera as well. Even as he remains a disembodied voice from on high, physically unrevealed.

A few days prior to closing night Filmmaker reached out to the First Look vet (2018’s You Have No Idea How Much I Love You) to find out how (and why) he turned his neighborhood sidewalk into a humanist movie set.

Filmmaker: So why spend two years of your life shooting from the exact same angle and location? Were you even certain this could be a feature film?

Łoziński: Because of my curiosity for fellow human beings I did this film a bit by chance, accidentally. Due to a lack of other ideas I decided to look for the hero and the topic for my new film without leaving the house.

I was always interested in what the passersby under my balcony have in their heads and hearts. Sometimes I sat there, privately without a camera, and overheard what they were talking about. The film came from simple curiosity: Who are they? Where they are going and what is the meaning of their lives? It was an experiment for me and for them. I asked myself, Is there a chance to meet an entire cross-section of people by putting the camera in a fixed place? I was trying to change the rules of the normal documentary game – this time it’s not me following the people with my camera around the world, but me waiting for them until they enter my frame.

I received many valuable gifts from my movie heroes. They told me about their lives, honestly and courageously. Some of them came back to the camera and we had closer contact. People need to be noticed, they want to stop being invisible for awhile and tell their story to someone. While waiting patiently on the balcony, I became a kind of secular confessional for them. They could always find me there and tell other people about themselves through my camera. Then we ceased to be strangers to each other, a bond was formed. Once the people started to come back to my camera with their everyday stories I felt sure I had a film.

Initially, I wanted to have four seasons in my movie and thought that one year spent on the balcony would be enough. But I got so engaged with meeting people that I spent over two and a half years filming. (I also beat my private record for the number of shooting days – 165.)

Filmmaker: Though you’re the son of renowned documentary filmmaker Marcel Łoziński, you also started out as an assistant to Kieślowski. So why did you ultimately choose a career in nonfiction?

Łoziński: That’s one of the reasons – both gentleman made great documentaries. I’ve learned a lot from them. There is also the question, why rebuild the world when it has already been created once? I would never have invented the dialogue and characters that I have in my film. I would not have had enough imagination. I made one narrative film in the ’90s, but I’ve decided to come back to the documentary form of storytelling. Maybe for me it is the easiest way of talking about things that are important. And working on small budgets and with the same group of friends helping me to make my films also gives me a freedom of speech.

Filmmaker: It strikes me that this doc is quite different from other “balcony movies” of recent years in that you’re doing much more than just observing – you’re vigorously engaging with your characters. So why was it important to include yourself as a prominent voice in the film?

Łoziński: We joke that this is a pre-COVID movie made from a safe social distance. I started making it two years before the pandemic. The balcony point of view was something very unusual at that time.

If you want to get something from your protagonists you have to give them something in exchange. So I gave what I could – my curiosity, my willingness to talk, my time and openness. It’s a film about the filmmaker as well, a strange guy standing for hours on the balcony with his camera ready to record every new encounter. How does he deal with his job? What is the price that his family is paying for his interest in other people’s lives?

Filmmaker: So how did the pandemic and its ushering in of an era of isolation and social distancing affect the film and its meaning for you?

Łoziński: The pandemic came while the film was being made. From the beginning I had a feeling that would not be the topic. I wanted to make a film that gave hope. COVID, of course, could spoil this feeling.

Also, I’d already made a ten-minute short (for HBO Max titled Mask And Men) about the first days of lockdown. I used the same “balcony” method of storytelling, in which passersby told me about their fears and hopes.

Filmmaker: The doc does include some testy scenes with your wife, which led me to wonder if anyone you filmed was unhappy with the final cut. What’s been the reactions from participants? Did you have to cut certain characters?

Łoziński: I didn’t have to. They all agreed to be in the movie. Some of my protagonists were even present at the Warsaw premiere of the film. Ms. Zosia, the janitor of our building, was proudly waving to the audience like a British queen. It was a very touching moment for me. She accepted herself in the movie.

While filming I was actually quite surprised that I didn’t encounter any strong opposition or aggression. I even dreamed of a scene where someone throws a rock at my camera. Nothing. Maybe I was too nice to the passersby? But I wasn’t looking for provocation, just doing soul searching, as one of the heroes put it so nicely. And my wife Agnieszka helped me a lot. Without her I would never have made this film. She is one of my favorite characters, and not only in the movie.