The history of moviegoing in New York City is quintessential to the survival of the medium. Manhattan alone provided a healthy nexus of theatrical activity at the beginning of the 20th century, and in that regard, little has changed. The city continues to host dozens of theaters, including more arthouse venues than almost anywhere else in the world. From the usual specialty releases regularly showcased at the Sunshine and the Angelika to the storied repertory programming at prestigious fixtures like Film Forum and Lincoln Center, New Yorkers have innumerable eclectic opportunities to expand their cinematic horizons.

But movies without distribution have a hard time finding a certified route to these popular establishments. That’s a gap that the new reRun Gastropub Theater, which opened in the back room of reBar in Brooklyn’s hip Dumbo neighborhood on Friday, will help fill: The venue, a 60-seat screening room that includes a full bar and elaborate snack options, aims to focus on undistributed or overlooked indies from the festival circuit. Although the bar is owned and operated by Jason Stevens, freelance critic and Greencine Daily blogger Aaron Hillis has been hired to manage the program. A good friend and colleague of yours truly, Hillis resides at the heart of Indiewood as an occasional filmmaker (his documentary “Fish Kill Flea” made the festival rounds in 2007), programmer, and journalist, and he also serves as VP of the DVD label Benten Films — a quadruple-threat that allows him to keep up with plenty of the noteworthy low budget achievements struggling to get noticed. 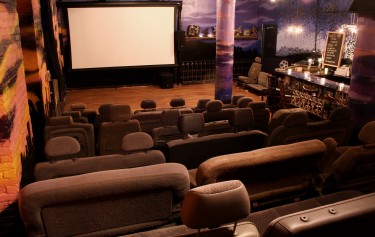 On Friday, I made it out to the 11:30pm screening of reRun’s opening night feature, Frank Ross’s chatty lo-fi character study “Audrey the Trainwreck.” Ross, a Chicago-based filmmaker whose movies are distinguishable by an attentiveness to overlapping dialogue and the positioning of extreme frustration as comedy, premiered “Audrey” at the South by Southwest Film Festival in March. By bringing his movie to reRun, he managed to get publicity from The New York Times, The New Yorker and several other outlets (including, well, this one). With “Audrey” playing at reRun for a full week, he also gets the general satisfaction of knowing that Brooklyn’s culture-savvy moviegoers can look to his work as counterprogramming during summer blockbuster season.

A ramshackle production like “Audrey,” in which a cubicle-dwelling loner played by Anthony Baker literally stumbles from one awkward social encounter to another, certainly won’t please audiences in search of easy escapism. Nevertheless, it is essentially driven by a delightfully screwball sense of twentysomething discomfort, and that’s precisely why reRun offers a good venue for it. (Financial incentives have to take a backseat under these conditions, given the smallness of the venue and the profit share. Filmmakers like Ross, of course, aren’t searching for the big bucks.)

Attendees sit in recycled car seats (complete with seatbelts) and watch movies projected off a DVD player. Show up a little early and you can grab a beer or one of several popcorn options, including duck and bacon fat. (I went for the duck fat, but was treated to a sample of the bacon fat popcorn as well; both are insanely flavorful, as you might imagine.) Despite the gastropub features, the vibe at reRun is less like Austin’s Alamo Drafthouse than an elegantly designed living room, a place where your friend might share his latest cinematic discovery with a handful of close acquaintances.

Only 16 people showed up for the screening I attended, but I’m told the 6:30 screening sold out. For legal reasons, the bar closes during the screening, so you don’t have drunk people stumbling through the aisles in search of refills. Still, I enjoyed the relaxed feeling in the room, and can only hope that the upcoming features Hillis has scheduled (movies in the programming queue include the character study “The New Year” and the playful SXSW documentary “The Parking Lot Movie”) benefit from ongoing word-of-mouth.

As a recent Times feature pointed out, reRun isn’t the only independently-run Brooklyn movie venue, as indieScreen opens in Williamsburg later this year. The 92YTribeca also shows a lot of independent fare and allows patrons to bring beer from the adjacent music venue into the theater, although films rarely screen there for more than a night at a time. Light Industry, in downtown Brooklyn, holds down the avant garde fort with wonderful cinephilic programming that almost never shows anywhere else. But for now, only reRun attempts to bring largely accessible D.I.Y. creations to a more general audience. That would be moot if it wasn’t a genuinely cozy place to watch a movie, but believe me: These car seats make you want to stay put. And that’s exactly the sensation that every filmmaker hopes to create.