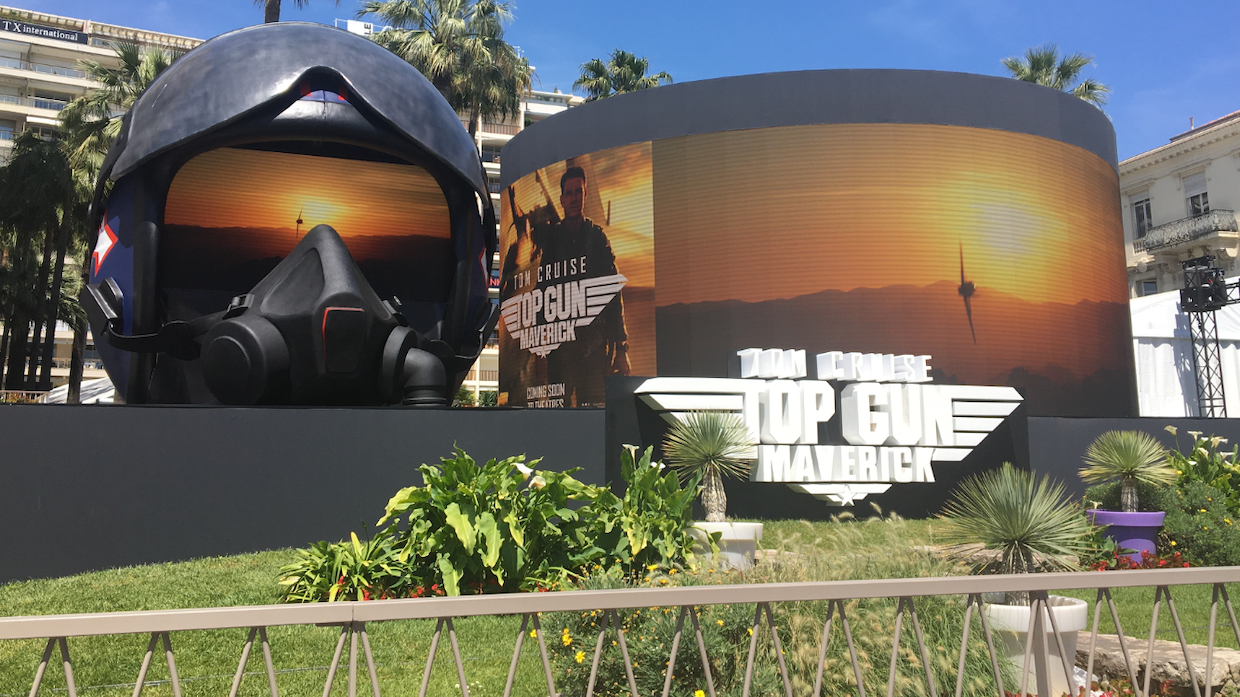 At the Nice airport, a sign greets arrivals with “Welcome to the Côte d’Azur” in French, Russian and (smaller type) English, giving an idea of the area’s most regular visitors. But at this year’s Cannes, the yacht count is likely to be down, what with presumably diminished attendance from extremely wealthy Russians. The first person to point that out was a friend before leaving, the second a stranger on the bus from the airport to Cannes—one of a pair arriving to raise financing for four features in development and a fifth in post, which they said was “more of a psychological thriller than a horror film,” and whose treatment, they’d been told by unspecified industry types, was “one of the best they’ve ever read.” Thus began my very first Cannes, as close to The Player in ambient industry respects as might have been expected.

That’s market side, which is its own predictably illuminating experience, not that I was under any illusion Cannes attendees are primarily huddled and talking about Hong Sang-soo in hushed tones. A walk down the Croisette provides a number of sights that are instructive in their own way. Gigantic signage for Top Gun: Maverick, showing here, was a given; less obvious was a billboard for Hill Valley, a product placement specialist. Their advertising worked; I pulled up their website and was sucked into a “case study” video proudly showcasing their work at integrating Evian into The Amazing Spider-Man 2. (Takeaway: the single most likely reason movies ever have sequences set in Times Square is for a faux-organic excuse to composite clients into a space literally built for advertising.) And if we’re all supposed to be leery of Saudi Arabia’s human rights abuses, that doesn’t apply for the multiple trade publications I spotted that sold their cover, a premium advertising position, to that country’s (understandably controversial!) Red Sea International Film Festival. The business of Cannes is business, and quite right too.

As far as the fest proper: Thierry Fremaux, Cannes’s artistic director since 2004, regularly says unintentionally hilarious things like (of his programming choices) “Of course, I make some mistakes sometimes, but that is quite rare.” I’m excited to see the spectacle of the world’s biggest film festival in person, even as I have my doubts about that statement. My first screening, Pietro Marcello’s Scarlet, is the Italian director’s first in French, the debut of its star—Juliette Jouan, found after a scouting process for a fresh face—and, perhaps most pertinently, Marcello’s first film with a score by Gabriel Yared. The veteran composer’s work trends towards “soaring and magical,” which is about right for a work moderately insistent on its own transporting qualities. Marcello here is working as loosely as the festival synopsis implies from Alexander Grin’s Russian novella The Scarlet Sails, and his changes (made with the help of three credited screenwriting collaborators) begin with transplanting the story from Grin’s unspecified land of somewhere-or-other to post-WWI France. The scene’s set with the first of many of Marcello’s characteristic uses of beautifully restored archival footage—here, pallidly colored footage of trucks of soldiers rolling back into town—before switching to purpose-shot footage Raphaël (Raphaël Thiéry) returning from the front to find his wife dead and infant Juliette to take care of.

The plot, which doesn’t intrude on the vibes-forward filmmaking terribly often, follows Juliette as she grows up amidst hostile villagers and finds love with aviator Jean (Louis Garrel). Marcello, characteristically, is much more interested in reconstructing a time and place in European history—to what thematic end, if any, is unclear. (In the post-screening Q&A, he described Scarlet as a “universal love story,” which fair enough I guess.) Where Martin Eden marched through the 20th century to contemplate the dissolution of any lingering idealism about Western Europe, Scarlet is a modest romance that chronologically confines itself to between the wars, mostly in the tiny village where Raphaël and Juliette live—a decidedly pre-electricity setting where the arrival of Jean’s biplane is like a disruption from the future.

Scarlet’s magical realist gestures include having Juliette semi-regularly burst into song over Yared’s score, precisely one animated insert shot of a bird flying and the finale, in which the source’s titular scarlet sails make an appearance. The mood is generally pleasant rather than the angry modernism of Martin Eden and the film moves with surprising swiftness, leaving little trace of either its grimmer moments or its swings for the romantic fences. Marcello’s cineaste preferences manifest themselves not just in his by-now familiar use of archival footage, which include truly gorgeous, sometimes aggressively tinted Paris footage, but by shooting on 35mm, which creates literally pixelated continuity with the past. Modernity also rears its head in the implicit spread of cinema: on a trip to Paris, young Juliette is gifted a zoopraxisope by a toy store owner and is later seen working on a cardboard mount for 3D slides. I’m not unsympathetic; still, it made me wonder what it’d be like to see, for once, a cinephilic film that isn’t in any way about cinephilia. As is, these moments felt a little like Hugo, even as Yared’s characteristic score, in combination with lots of shots of the biplane taking off and flying, unexpectedly and presumably unintentionally put me in the mind of The English Patient.