Annie Ernaux and David Ernaux-Briot on The Super 8 Years 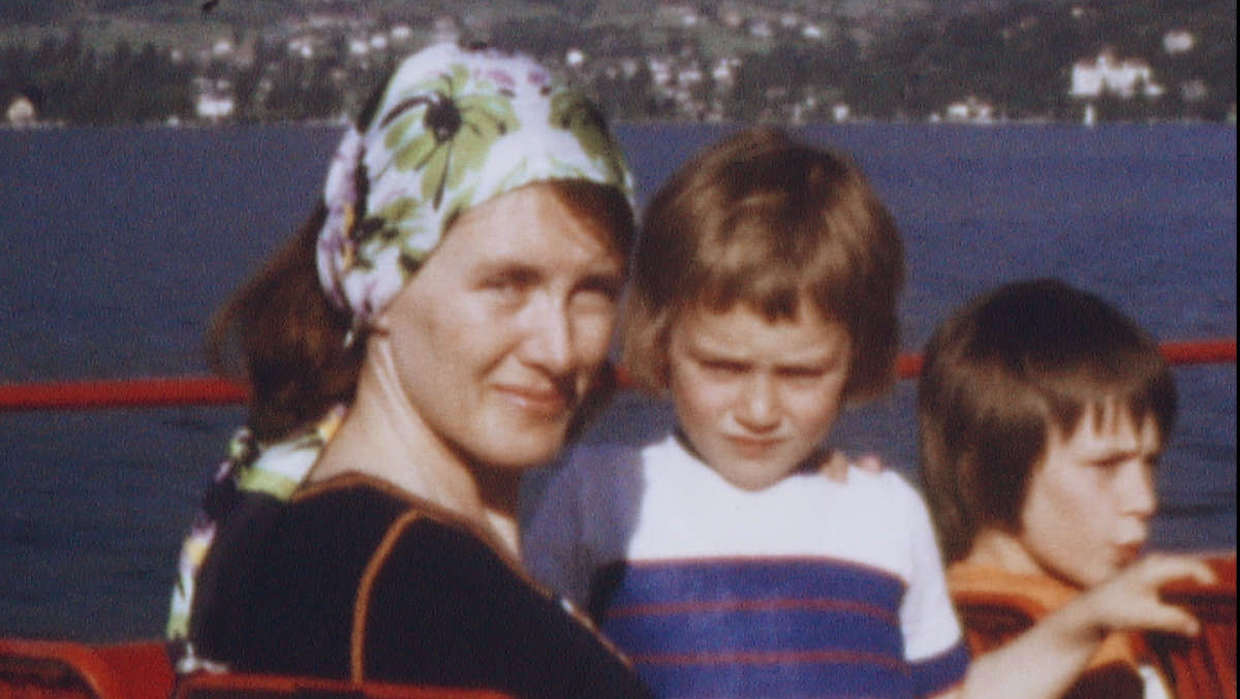 by Vadim Rizov
in Directors, Festivals & Events, Interviews, Screenwriters
on May 26, 2022

For Annie Ernaux fans, The Super 8 Years is something better than a movie—it’s effectively a new Ernaux novella, assembled from home movie footage shot by her late ex-husband Philippe Ernaux and directed by her son David. The author reads her text over a trim 61 minutes, assembled from footage shot by Philippe beginning in 1972, when he first bought a Bell & Howell super 8 camera, until their separation in 1981. Ernaux’s memoirs have examined her life while rarely overlapping what’s recalled from one book to another, which is true here even as what we see fills out her work: it’s impossible not to gasp when seeing her mother, the subject of so much of her work, suddenly in motion. The film’s subject is a new one—the slow-motion dissolve of her marriage, a subject she’s written about before but not in such detail—and its highlights include records of trips she took over the decade covered, from a weird sojourn in Albania to her an early 80s Moscow visit. Super 8 Years thus fills in a decade of Ernaux’s life, working both against and from the late Philippe’s perspective. The result is both a new text and its own dialectical synthesis, a narrative filled out with a typically dazzling array of references to films, music and political outrages from the period covered. (The prose in English is consistent with her style, as the subtitles were done by one of her two regular English-language translators, Alison Strayer.)

In general, I never do roundtable interviews; in this specific case, though, there was no way I was going to pass up a chance while at Cannes to ask even a few questions of the octogenarian legend. I was joined by journalists Patrick Heidmann and Joao Antunes; the latter began by asking about Ernaux’s emotions on watching the home movies some 40 years later.

Annie Ernaux: Actually, it wasn’t a matter of emotions because, in terms of time, I was seeing it with a distance that allowed me to create this narrative. If I had watched it 10 or 20 years [after the footage was shot], perhaps I would have felt troubled still. Now I have that distance—I was seeing this different woman that had been me but is no longer me, in a context that is no longer my context. So, it wasn’t really a matter of emotions.

David Ernaux-Briot: Me neither. I didn’t feel any particular emotions while watching it, for the simple reason that these images were part of me, my memory of my childhood. I did feel great emotion during the editing, because what I saw while building this film was my own story. Not at the age of three, but right now as a father with small children—ages 11, 9, and 4—I found myself today in my parents’s situation in the film. So, that was a source of emotion.

Patrick Heidmann: In your writing, you’ve always worked with memories and your diaries. Did working with a visual medium feel very different, or was it just an extension of what you have been doing?

Annie Ernaux: It was both an extension and something very different—an extension in the sense that, once again, I was working with memory, with souvenirs, like in my books. So, there’s a similarity. But the big difference is that here the main things are the images, so I had to submit myself to the content of the images. Even if I developed that content with my diaries, with my own ideas, it was starting from the images. Of course, I’m not discovering them, I knew them before, but now I was working to give them some context, and that is something very different. The result is completely new.

Vadim Rizov: I wanted to ask about your relationship to cinephilia. I found some interviews in French where you talk about this a little bit, how you’ve been watching films pretty heavily since the French New Wave. You mention Rohmer’s Boyfriends and Girlfriends in this film, and I think about your books a lot in relationship to Rohmer, because his movies often deal with municipal development, questions of zoning and moving further and closer to Paris. You live in Cergy Pontoise now, where Boyfriends was shot.

Annie Ernaux: Yes, my love for film has been since the New Wave in film, but also, at the same time, I was discovering the nouveau roman. Agnès Varda and Robbe-Grillet and films like Last Year in Marienbad all pushed me to write differently—actually, I think, cinema more than the nouveau roman gave me that impulse to try to write in a different way. The film that Rohmer did about Cergy in 1985—I’ve been living over 40 years in Cergy, so it was tempting to bring together the image that he wanted to convey in that film about the city where I live and the way I see it, which is totally different. That’s awhy I took part in Régis Sauder’s J’ai aimé vivre là, a documentary he made about Cergy. The title of the film, J’ai aimé vivre là, is a phrase that I say in the film, because it’s about the city where I live.

Joao Antunes: Most of the images we see are from the ’70s, a period where we could still dream about new worlds. How do you see the evolution of the world since that period that we saw again yesterday and now?

Annie Ernaux: The difference is radical, day and night, between the ’70s and today. This difference was already starting to germinate in those days, where we thought that we could expand ceaselessly, that we could go out and conquer and experiment, and nature was just scenery where we could deploy ourselves. We could travel and conquer and experiment with all kinds of things, including politics. But then nature appeared with its limited resources, and that changed the situation. I do realize that today there is this hopelessness that I hope, or expect, is just today, There will be another moment in which hope, this desire to conquer other things, will be born again. But it’s all about this impossibility of foreseeing tomorrow, even though tomorrow is already present in today.

Patrick Heidmann: Could you tell us a little bit about actually working on the film? How did you decide which images and moments to put in there, which to leave out? Had you seen the material a lot over the years? Did you make new discoveries? And at what point did then the text come into play? Was that written at the very end or hand in hand?

David Ernaux-Briot: The idea came from my desire to transmit our family memory to my children, so I started doing something with these images, with recorded voiceover comments from me and my mother, my brother, etc. Then the idea came to make the film. She wrote the text on her own. I was looking at the materials. Some of them I watched them on my own, some of them we watched together because I needed context. For instance, the trip to Albania, I wasn’t there, so she could give me some context. During two months, she wrote on her own, then in the editing room, she made a draft voiceover of the text, and during lockdown, she recorded on her own. Then, with editor Clément Pinteaux, what we did was organize the images over, or according to, the voice. We did make a few changes afterwards in the structure, removing some small parts of the text only because they were just redundant and repeating the images, but all of this was done in agreement,

Annie Ernaux: Basically it’s two creative processes. I write and he does not interfere; he works with the images and I don’t interfere there.

Vadim Rizov: I don’t know if thinking about volume and tempo, and matching that to the image, changed how you wrote. I assume not, but was there any discussion about that?

Annie Ernaux: Actually not at all. I wrote in a completely autonomous and free way. There was no discussion about, for instance, the structure of the text, about which subjects I would tackle or anything. It was completely autonomous work with images. For instance, how much I wrote about one thing or another, about the trip to Chile, for instance, much more than that last trip to Spain and Portugal because there was less material. There were fewer images and it felt [like] I had less to say, but there was no previous discussion about how that would be structured, then he just added the images and the structure of the images as he wished.

Vadim Rizov: How did that work with the sound that you chose to add selectively to the footage?

David Ernaux-Briot: Thank you very much for this question that deals precisely with filmmaking. So, about tempo and duration, this was back and forth between the available images and how we wanted to use them. Some images are in addition to the text; others, a confirmation of what’s being said. But at some points where we don’t have the images, for instance, of some political processes or whatever, the image works as a symbolic or emotional support to the text.

Regarding the duration, in many parts, what I tried to do was—perhaps the word might not be “respect,” but to follow or to keep my father’s filmmaking, because he is the one that filmed and had his own sense of timing and duration. So, for instance, there’s some parts where that editing of the time and duration is really not mine, but what I did was decide to keep his. For instance, in the part about our arrival to Cergy in 1970, the shots last as much as he made them last. Regarding the sound, it was important because we say that this is a silent film, so we added some reconstruction of sounds. And it was important to make that clear, to establish this pact with the spectator. That’s why, at the beginning, you start hearing the voice, and she says explicitly, “This is a silent film,” but we do hear [sounds]. So, it’s immediately establishing this sound is artificial.

Joao Antunes: What made you write in the first place when you began to write?

Annie Ernaux: The desire to write already came at the age of 20. Then at the age of 22, I wrote a book. I actually finished it, but it was never published. What pushed me to start writing again 10 years later was the awareness of leaving your social class and asking myself through what process and how I had become that woman that we see in the film, this well-dressed woman in this well-off milieu that’s a teacher. How had I changed classes and become that? So, in a way, the film shows, or really doesn’t show—I speak of it on top of the images—that I was living this exact process.