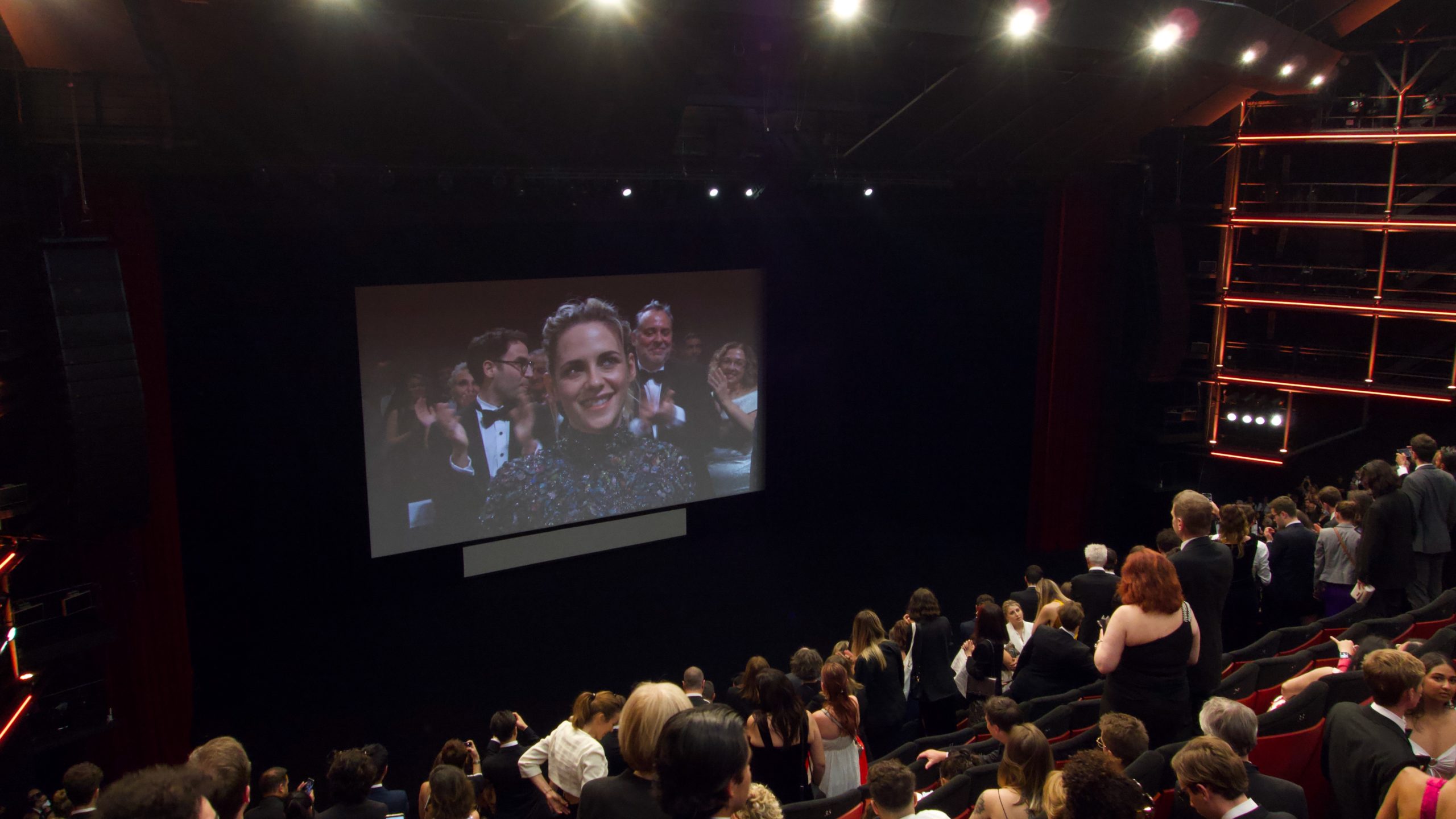 At the Crimes of the Future premiere

Filmmaker Pepi Ginsberg is attending Cannes for the first time with her short, The Pass, in the La Cinef section. Below, she begins a diary series on her trip there. Read an interview with Ginsberg about the film here. — Editor

The plane was delayed. In all of my Cannes anticipation (anxiety), I was convinced the plane would never leave Newark. That feels very existential. Stuck in the United Lounge for the rest of time. We did leave. And only an hour and half late. An easy flight. No major hiccups. Saw a sign for Gael Garcia Bernal when we landed. Had a sign for our car from the festival. Got an official car. Tried very hard to clandestinely take a picture of the official car. Felt too embarrassed. Still tried. Photo fail. Realized how tired I was when I kept conking out instead of looking out the window. I’ve never been here, and that’s a favorite thing to do when coming to a new place. It’s beautiful and the drive feels like a better version of Florida or a Frencher version of Italy (my only reference points! What an American!) Hustled up the many many flights of stairs with the fam, and baby in tow to the second floor of the BnB. Showered, changed. Off to a meeting.

Sitting in an office. 84 Rue d’antibes. Not 4. So I’m a little late. But generals are like doctors visits, and a grace period is expected, requisite. I feel good about my tardiness as I know it will be met with – nope. Here is my meeting. I was just late. Well that went well! What a lovely person. Okay! Here we are in Cannes!

Entering the Palais du Festival, this is pretty grand! I’m seeing the tuxes and dresses outside already. I’m a little dizzy. I was warned that it was hard to find cheap food and coffee and time. Getting my bearings. Sounds about right! Heading to a director’s meeting at La Cinef.  Fifth Floor. Bunuel Theater. They do a little interview for the La Cinef website, ask what it means to be here and what directors I love that have screened here. Saying it out loud is almost overwhelming, and I get overly smiley. This place is a cinema Mecca. I am aware of being the tiniest fish here but excited to get in the water. This is also my first real festival.

Outside, more suits and dresses, lines with people looking for Cronenberg tickets to Crimes of the Future. A little bit like MSG in that way. And then in no other ways! Walk around with my husband, daughter and her babysitter who is so kindly joining for a few days. Forget to get dinner, we run home: A change, a shower, a few emails. I throw on my own dress and walk with my husband to the screening!

The line moves fast and soon we enter through the side of the red carpet, hustled up to the balcony but not before swiping a view of the stars as they enter. The paparazzi, whose empty ladders were stacked earlier this afternoon facing the Palais, are now shooting in rapid fire. Cronenberg wears very cool sunglasses, but I wonder if it’s as much for the protection from the flashes as for the look. We meet our film’s producer, Maria, inside. She looks beautiful. And in fairness, everyone does. The ceremony of it all is very new to me and also very dreamy. It’s a lot but a good a lot. Almost got scammed by a fake paparazzi. Went home and crashed after eating a lot of bread, yogurt and cheese. 1:00 AM: the first meal of the day!!

Up early, no one else is. A dog across the street wanders across the patio, changes his mind, back inside. Crimes of the Future looked beautiful, the sound was amazing. It wasn’t my favorite Cronenberg. They project a live feed of the red carpet in the theater before the film. It’s hard to look away, the glamour and the spectacle is stunning having never seen it before. Had a few meetings this morning, getting my bearings. It’s nice to meet new people, exciting to talk about what’s next. The city smells like burnt fuel, cigarettes and sunblock. The yachts are docked. There are mountains in the distance.

Started the morning with a group photo for La Cinef on the stairs to the Lumiere. Then a long long long and lovely day of meetings. Saw the first round of La Cinef films. Sat with our two producers (Joseph Longo and Maria Akay), my husband the film’s composer (Martin Crane) and our lead actor (Angus O’Brien). The shorts were wonderful. A beautiful film from China called Somewhere. Every frame was a photograph I’d hang on the wall and the performances were superb. Had an interview with a Polish radio journalist. A young man. I love meeting people from other countries, for a moment you can travel in your mind to their home, imagine them and their whole wide world. After the screenings more meetings. Then a screening at the Lumiere with my cast and crew. Looking forward to meeting together. This is such a trip! What a day. Ended with a drink with our sales agents (and some good news!) before one last meeting off La Croisette in a giant old mansion. I’d move in in a heartbeat. Back home. Blurry eyed. And dizzy. Literally. The Cannes Effect I guess. Off to see Nostalgia, repurposing my long dress. It’s a uniform now. Not bad. Not bad.