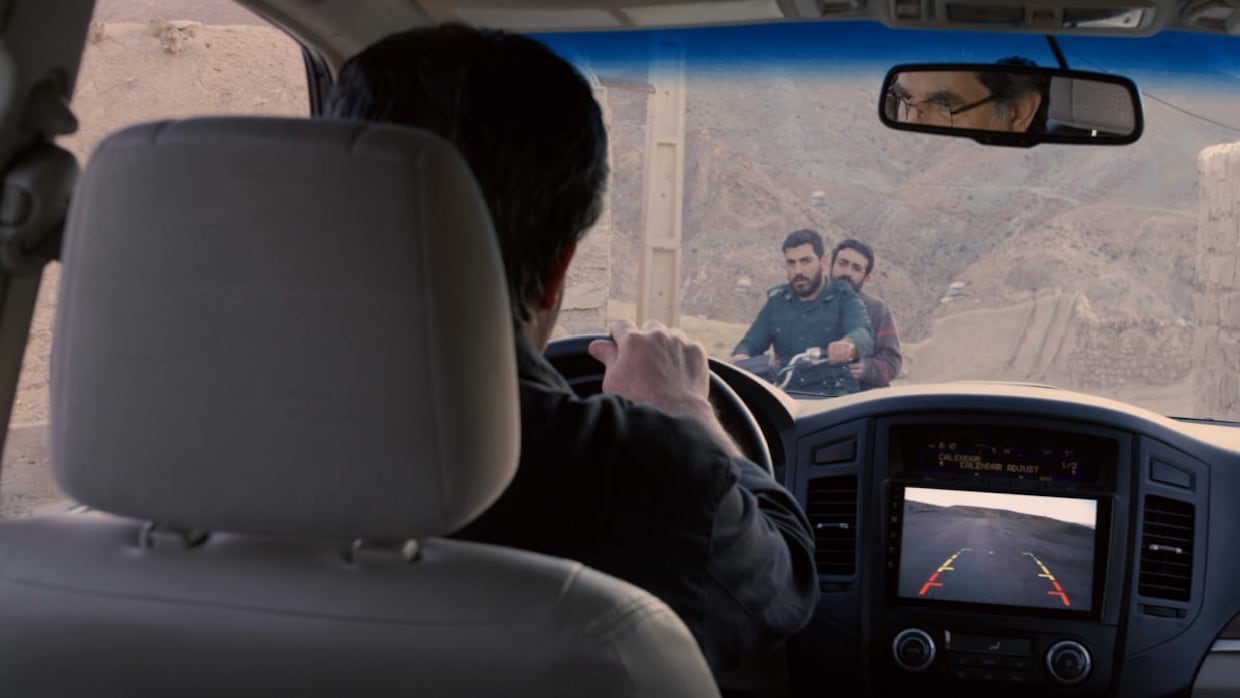 Jafar Panahi in No Bears

I got out of a jam-packed P&I screening of Jafar Panahi’s No Bears literally two minutes after the Venice Film Festival announced a special jury prize for the film. It’s probably not overly cynical to attribute at least part of both my screening’s high attendance and the festival’s award to the sad news that the director is back in jail—his status as a high-profile Iranian dissident is inextricable from his work since 2011 when, under house arrest and banned from making movies, he started making features with him front and center as the lead protagonist. That on-screen character is by now well-established: unflappably calm to the point of opacity, eager to talk to or photograph strangers, bemused by the complications his theoretically forbidden presence brings about.

No Bears more or less picks up in the same vein where 2018’s Three Faces left off, with Panahi again tangling with locals in obscure Iranian villages. This time, he’s come to a town on the Turkish border to be as close as possible while directing, via remote link, a new production on the other side of the geographical line. His habit of taking photographs prompts the secondary plot that runs alongside its starting point as a low-key take on “the film production from hell,” where the difficulties with the film-within-a-film’s actors are neck-and-neck with the feuding villagers whose mess Panahi is sucked into after he takes a photo of a couple: they’re not engaged, and the presumptive fiancé (and everyone else in the village) demands to see the snapshot. At least some of the implications of Panahi swearing he didn’t take any picture while fielding demands from authorities for corroborating documentation are easy to metaphorically align with his situation, in the “totalitarian regime as black comedy” vein. The politics and participants’ backgrounds—like the trilingual switching between Turkish, Farsi and Azeri—aren’t spelled out for non-local viewers, and many of the nuances absolutely went over my head. More power to Panahi for that; insisting that cultural specificity be insisted on its own terms is a good.

If I can separate form from extremely localized function, I find Panahi’s late-period aesthetic—extremely long takes predicated on naturalistic exchanges that often feel like all dramatic urgency has been forcibly removed from borderline melodramatic situations, but without this affective gap creating any intentional friction or heightening effect—hard to tap into. That’s why I got briefly very excited at the first shot, eventually revealed as part of the film-within-a-film. This opening is a slow, meticulously choreographed 360 planted in the center of a Turkish street: first we see a porter carrying his wares down the street, then a gang of roaming musicians, and finally the protagonists emerge from the plotless drama of the street. This shot is an explicit revisitation of similarly structured opening 360s in 1995’s The White Balloon and 1997’s The Mirror, suggesting what Panahi’s work might be now if he were to repeatedly revise the same methods and provide the same satisfactions, texturally tweaked for the digital age. .

Relatively early on, Panahi gives a camera to his host and asks him to shoot a wedding. The man returns with footage that reveals that he’s confused when to start and stop shooting, inadvertently capturing himself questioning the urban visitor’s motivations and gossiping about him, a good and unfamiliar joke about a camera that reveals the truth by being misused rather than purposefully deployed. Otherwise, No Bears is once again revisiting Kiarostamian motifs, both in its driving shots and early on when Panahi holds his cell phone to the window while trying to capture a signal, just like the hapless visiting journalist  in 1999’s The Wind Will Carry Us. Panahi’s project of breaking constructed fictions with the equally staged illusion of their disruption was first introduced in The Mirror, when its adolescent girl subject abruptly announces to the camera she no longer wants to do this and tries to escape its gaze. Some variation of this rupture drops roughly half a dozen times in No Bears, to the point that it’s more surprising when this doesn’t happen than when it does.

Festivals leveraging media coverage to throw a spotlight back on imperiled filmmakers like Panahi is obviously one thing they should be doing. Another less urgent but still amusing use for festivals is to showcase work that, for whatever reason, is impractical for the marketplace: “festival film” can be a pejorative for unwatchable pretension or simply a descriptor. Buried deep in the shorts program (at the end of “Short Cuts 05,” to be precise), Alice Rohrwacher’s 37-minute oddity La Pupille premiered at this year’s Cannes during the director’s masterclass; it’s traveling the festival circuit for a bit before reaching its final destination on Disney Plus. Super 16mm-shot medium-length indulgences are rare, and it’s additionally fun to see the words “A Disney Original” precede this impractical object, a light comic sketch starring Rohrwacher’s older sister and regular collaborator Alba as an especially frazzled nun presiding over a group of young girls at a boarding school from Christmas Eve to Day sometime during World War II. That holiday season background is the reason Disney got involved in the first place via intermediary Alfonso Cuarón, a fan of Rohrwacher’s who was approached by the studio to brainstorm a series of shorts set during the holiday season. Thematically, La Pupille lightly clowns on Catholic hypocrisy and strictures of false morality while theoretically (I guess) fulfilling the mandate of being a Disney Christmas movie with cute children. In practice, it allows Rohrwacher—whose genuinely strange sensibility and penchant for light surrealism has grown with each feature—to stage broad comedy with those kids, Rohrwacher’s barely-keeping-it-together authority figure and an especially broad Valeria Bruna Tedeschi as a local aristocrat. The children cheerfully bring La Pupille to a close with a song: “The moral? The ending? Who knows!”