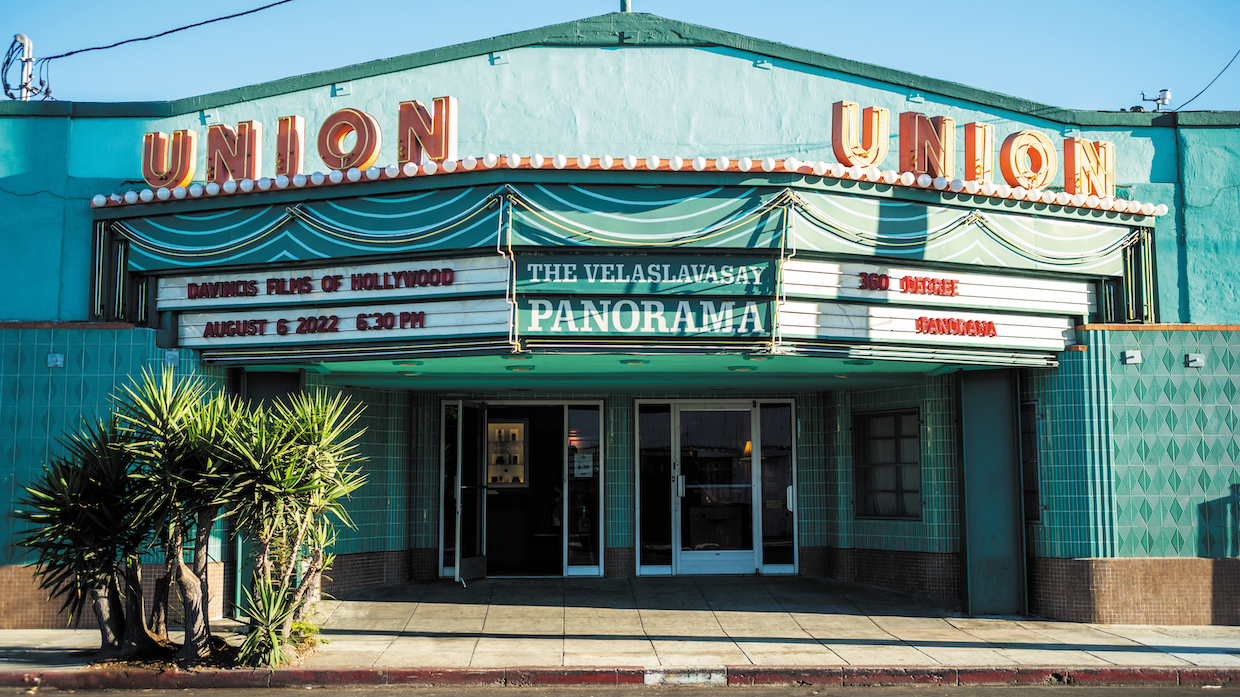 Technically, Sara Velas is not an educator, nor does she work for a film school. She doesn’t fret about curricula, teaching styles or shifts in filmmaking technology. Instead, she operates the wondrous Velaslavasay Panorama in the West Adams area of Los Angeles, where, semester after semester, I take groups of students on a field trip to experience old-school immersive media and think about ways in which media forms shift and change over time.

Ninety feet in circumference, Shengjing Panorama—the panorama currently on view—features a painting of the Chinese city of Shenyang between the years of 1910 and 1930. Created in collaboration with a team including Chinese artists Li Wu, Yan Yang and Zhou Fuxian, the exhibition features a 360-degree painting offset by a special lighting cycle and a soundscape. Standing in the cool, dark circle of buildings, animals and greenery from a bygone era creates a dizzying effect, in part owing to masterfully handled scale. It’s as though you are standing on a hill in the center of a city and looking down on the surroundings, from things close and large to those more in the distance. The lighting helps create the illusion that you are indeed looking far into the distance, while the sound suggests the proximity of people and quotidian activities.

The Velaslavasay is situated in what was once the Union Theatre, built in 1910 as one of LA’s earliest moving picture theaters. The Union’s projectors went dark in 1953, possibly reflecting the growing prominence of television, and the space became home to a long list of other establishments before Velas discovered it in 2004, fell in love and reclaimed the space for the rendering of imaginary times and places. The panorama’s regal moniker is Velas’s invention, combining parts of the names of her parents as a gesture of gratitude for their ongoing, cheerful support.

Velas was born in the LA neighborhood of Panorama City and was quite young when she first visited Disneyland in the 1970s, where the train ride that circles the park—taking visitors through a dinosaur diorama featuring mysterious lighting, sound design and an animatronic train, as well as the Circarama 360-degree theater, showcasing America the Beautiful—made a profound impression. Like many, she was forever changed by witnessing the massive moving images sweeping around a giddy audience in the “Circle-Vision 360°” theater. She nurtured a growing obsession with panoramas at college in St. Louis, where she studied George W. Melville’s 1904 photographic panorama of the St. Louis World’s Fair. A residency in Paris at Cité internationale des arts became a European pilgrimage. Velas visited several other extant panoramas, returning to LA primed to foster her persistent panorama passion. She rented a place called Chu Chu’s Chinese Food on Hollywood Boulevard, a venue made remarkable by its rotunda. Velas hand-painted a 60-foot speculative landscape picturing what the LA basin might have looked like in the early 19th century and hung it in the rotunda’s interior circle, thereby creating Panorama of the Valley of the Smokes. When the building was sold, Velas moved out and eventually found her permanent home at the Union Theatre, where she and collaborators Ruby Carlson and Oswaldo Gonzalez sustain their tribute to 360-degree media.

Recounting her experiences with panoramas and talking with students about the similarities between the 19th century’s panoramas and today’s experiments with 360-video and immersive VR, Velas highlights the need not simply for the experience itself but for the context that surrounds it. The Shengjing Panorama is so effective in part because the theater space housing it is itself from another era, an effect Velas has amplified by retaining the look and feel of a building from a distant decade. Each exhibition references a time and place from the past, from the Nova Tuskhut in the Ancillary Room—replicating an Arctic trading station—to the lobby exhibition, dedicated to “Film-in-Residence,” a series of casual matinee film screenings enhanced by the design of the panorama’s entrance. The current selection is Recorder: The Marion Stokes Project, directed by Matt Wolf, about the remarkable woman who recorded 70,000 video tapes, creating a personal television archive. The lobby features stacks and stacks of VHS tapes, VCRs and televisions, and visitors are invited to check out a random tape and watch. The effect of these odd spaces, each sitting next to the other, is delightfully disorienting; we revisit the past through its dusty artifacts, now arcane media objects.

Velas and Carlson, a curator for the Panorama, recently gave a presentation titled “History Panoramas as Pedagogical Devices: ‘Shengjing Panorama’” at the sixth World Conference of the International Federation of Public History in Berlin, arguing that the Velaslavasay creates a sense of productive disorientation, asking viewers to conjure a new sense of place and to experience the panorama as a kind of portal to the past. “We are seeing and creating at the same time multiple relations, juxtapositions, superimpositions,” says Velas. “In these relations lie a plethora of entangled tensions. Making these tensions recognizable to the visitor and not robbing them of their entangled shape are the ways in which the Velaslavasay Panorama is committed to public history.”

Velas’s effort is part of a larger project known as media archaeology, a loose collection of scholarly activities dedicated to tracing the radically diverse array of technologies that have had an often forgotten or elided influence on the development of cinema. The panorama, an iconic cultural object of the 19th century, has been theorized as the preeminent technology of Western subjectivity because of the way it placed humans in a profoundly dominant position in relation to the world. It therefore serves as an exemplary historical thread to contemporary film and immersive media, which also often work to orient an individual in relation to an all-powerful viewing situation. Velaslavasay’s celebration of the form of the panorama in an entire venue set within a different historical moment offers a great space for teaching and learning. And who doesn’t love a field trip?