“This Is Not a Film That’s Trying To Be ‘Correct’ in a Historical Sense”: Marie Kreutzer on Corsage 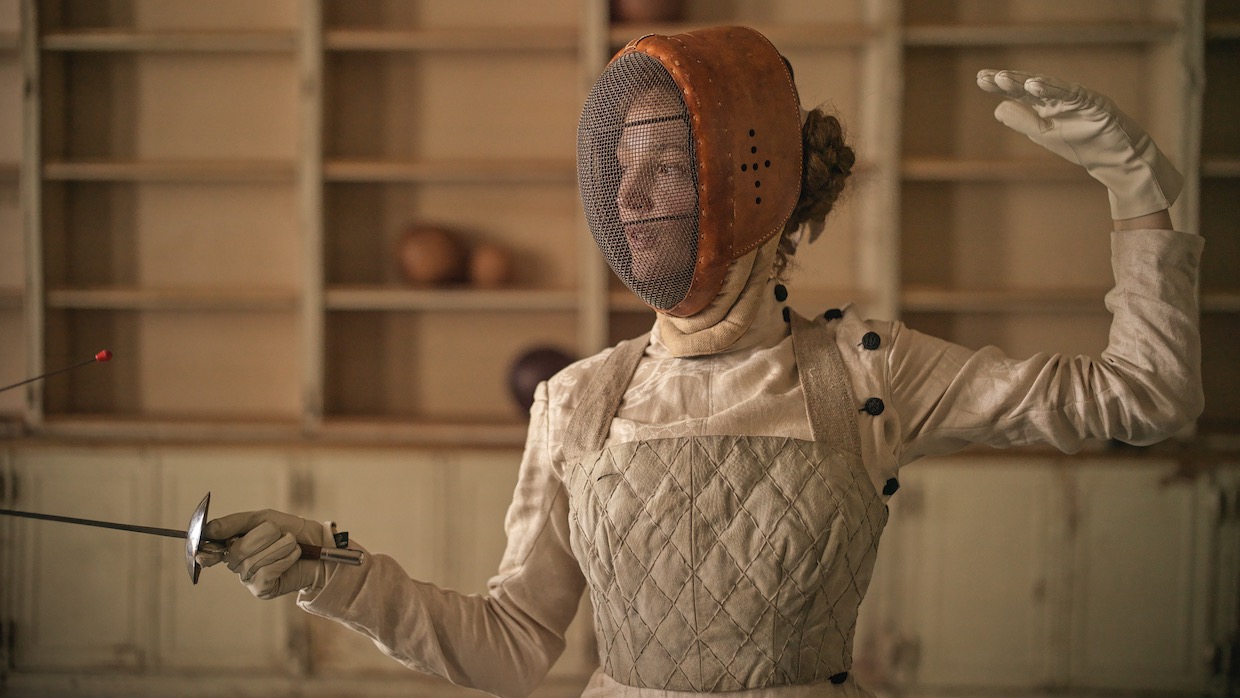 by Daniel Eagan
in Director Interviews
on Dec 22, 2022

In Corsage, the latest feature from writer-director Marie Kreutzer, Elisabeth, or “Sissi” as she’s affectionately known, is tired of being Empress of Austria. She walks out of official ceremonies, refuses to eat at banquets and throws herself recklessly into horse riding and gymnastics.

As played by Vicky Krieps, Elisabeth gains power by rejecting her duties. Krieps’s portrayal is a far cry from the Sissi played by Romy Schneider in a late-1950s trilogy of films, still perennial Christmas favorites on European TV. For that matter, Kreutzer’s mix of fact and fiction adds an intriguing layer of complexity to the biopic genre.

Overshadowing Corsage is the tragic history surrounding Elisabeth and her husband Franz Josef (played by Florian Teichtmeister). Life was not easy for Sissi, but then it wouldn’t be for any woman of that time.

Krieps inspired Kreutzer to think of Elisabeth as the subject of a movie, even though the writer and director was reluctant to shoot a period drama. Corsage represents Austria at this year’s Academy Awards, while Krieps has been winning festival awards for her performance.

Kreutzer attended the Vienna Film Academy. She has worked in film and television since her first feature in 2011, Die Vaterlosen. She spoke with Filmmaker via Zoom ahead of Corsage‘s theatrical release on December 23 from IFC Films.

Filmmaker: How did Vicky Krieps influence this project? Did she work with you on the script?

Kreutzer: No, she was off shooting [another film]. We were in touch, but I didn’t even tell her I was working on this. I prefer to work alone on my scripts. It’s an organic process, and sometimes it’s hard to remember how certain ideas got into the story.

I’m on my own while writing. I listen to a lot of music, I have my mood boards, I try to be in the “universe” of the film. I knew I would be focusing on Elisabeth in her thirties or forties, because I would be doing this with Vicky, so it wouldn’t be about a 20- or a 60-year-old.

I didn’t know much about her life. We do know from her letters that she hated being an empress from the very beginning. A couple of weeks after her wedding, she wrote to her parents: “What did you get me into?” I could sense when she was in her mid- or late-thirties she started to rebel, in small and then bigger ways. She fled the court as much as she could. She was smoking, even in public. She had to preside at official dinners, but they couldn’t make her eat. She would sit there like, “I have to be here, but I don’t have to do anything else.” She was a woman who just did not want to meet the expectations of anyone. I felt this was something that could interest us today.

Filmmaker: You freely mix fact and fiction telling her story. How did the script evolve while you were writing?

Kreutzer: Writing a script, you have to make it work, but you’re not allowed to think about making it work. Otherwise the audience will feel it. There are so many films which are structured perfectly, but I can see the structure. I never want that, I want to write something that feels surprising. So it’s organic, but it’s not really about changes. The first draft had a different ending, which I found a bit cheesy. I later came up with the ending we see now. Some small things changed. That always happens when I write a script.

My scripts mostly have females as the main characters. People who read them—producers, funders—will say, “It’s a great script, but do you think people will like her?” It’s become a mission for me to allow the audience to see a complex female character. It took work to balance her part, to stay true to what I learned about her as a person, to show different sides without judging her, but still not making it too hard for the audience to relate to her.

Filmmaker: What were you trying to balance about her?

Kreutzer: People really judge women, even characters on screen. Some people think she wasn’t a good mother. They said she was unkind to the servants, which I thought was realistic. Aristocrats were raised to treat servants as beneath them. It wouldn’t be honest to show Elisabeth becoming friends with, say, the woman who washes her hair. This is not a film that’s trying to be “correct” in a historical sense, but I still tried to stay true to what I read about her. So that was the balancing act. I think it works now, but it didn’t always work.

Filmmaker: Why would people expect a prisoner in a cell to be happy or nice?

Kreutzer: That’s the point. It’s hard for me to understand, too, when I see her being tied up in a corset. Listen, I love my characters, I always do. Sometimes people don’t get that at first, but it’s easier when you see the film, because Vicky is such a lovable person.

Filmmaker: Does realizing that the story is always evolving or changing affect how you shoot scenes?

Kreutzer: When you’re writing, you can get rid of scenes, but when you’re shooting, you have to fight for everything because every minute costs money. When you’re shooting, you’re absolutely sure everything is necessary. You can never guess which scenes will drop out in editing, but that’s what I love about filmmaking. It’s really like something is growing, coming together through all these creatives. You never know where you’re at or where you’re going. I saw an interview with an American producer who said, “My experience is they always take out the most expensive scene.”

Filmmaker: Did you shoot anything you didn’t use? Vicky Krieps told me there was an ice swimming sequence.

Kreutzer: Yes, that was in there at one point, but it felt totally wrong in the edit. It was supposed to be the very first scene, but then when we saw it in the film, it felt so freeing. That was completely wrong for the beginning, of course. We were always saying, “We’ll find a place for that scene,” but then we ended up not finding one [laughs]. That’s editing. My editor always says, “Kill your darlings.”

We had a sequence that took place in Hungary, although we shot it in Belgium. It never felt right to me, because for some reason it seemed made-up. While we were shooting, I didn’t know if the style we were using would work, if people would find it ridiculous or not relatable. I didn’t like her there so much, because [Sisi] was complaining all the time. I preferred her rebellious side, which I tried to bring out in the edit.

It’s not hard for me to let things go. I’m trying to make the purest version I can. I don’t know if you feel that when seeing this film, because there’s still so much there. But I think it’s all needed for me to tell the story, and not just decorative.

Filmmaker: You shot Corsage on film. How did that affect working with the cast and crew?

Kreutzer: I always try to shoot on film. It doesn’t work all the time, but more than half of my movies were made on film. In film school in Vienna, we learned everything analog. I feel close to the material with analog, it’s like a physical connection. I can never really understand digital, it never looks organic to me.

When you’re shooting on film, that’s just how it is. You have to make all the decisions on set because you cannot endlessly work on that material afterwards. That’s just not technically possible. So everything has to be decided there, on the set. I love that because it’s such a rare occasion for most people on set, it feels like another atmosphere. When the camera is running, it’s like a sacred moment. It costs money every second you are filming, so you’re really focused. Of course, it’s also exhausting for everyone. It’s demanding for DPs who are much more used to shooting on digital. When it’s digital, DPs have more control afterwards. On film, they don’t. That’s why they’re so nervous. But I love it when people are nervous. That means they’re really in the moment, focused and aware of what they’re doing. I don’t think film will ever die, in fact I think it’s getting stronger again.

Filmmaker: Did you use one camera? Even for the big banquet scenes?

Kreutzer: For the banquets we would use two, otherwise just the one. I’ve been doing big family dinner [scenes] since my first film. My then-DP would call them “full alarm” scenes. For Corsage, we would rehearse so everybody at the table would know what their manners were supposed to be. Everyone was prepared to be a perfect guest, but no one know how Vicky would behave. They reacted in a very organic way, because they didn’t know beforehand what she would do.

Filmmaker: You said you kept Vicky separate from the rest of the cast, which really paid off in scenes like those. Also, I thought your approach to Emperor Franz Josef was fascinating. You took the time to explain who he was.

Kreutzer: As a director, you have to find something that you like in every character. Something that the actor can relate to, because nobody wants to play a villain. Well, they do sometimes, but they still want to understand why they’re doing what they’re doing in a scene. The scenes with Florian and Vicky were the best. They’re both so brilliant, and shooting the scenes with just the two of them was maybe the most precious part of the project.