Sundance 2023: A Still Small Voice, La Pecera, Against the Tide 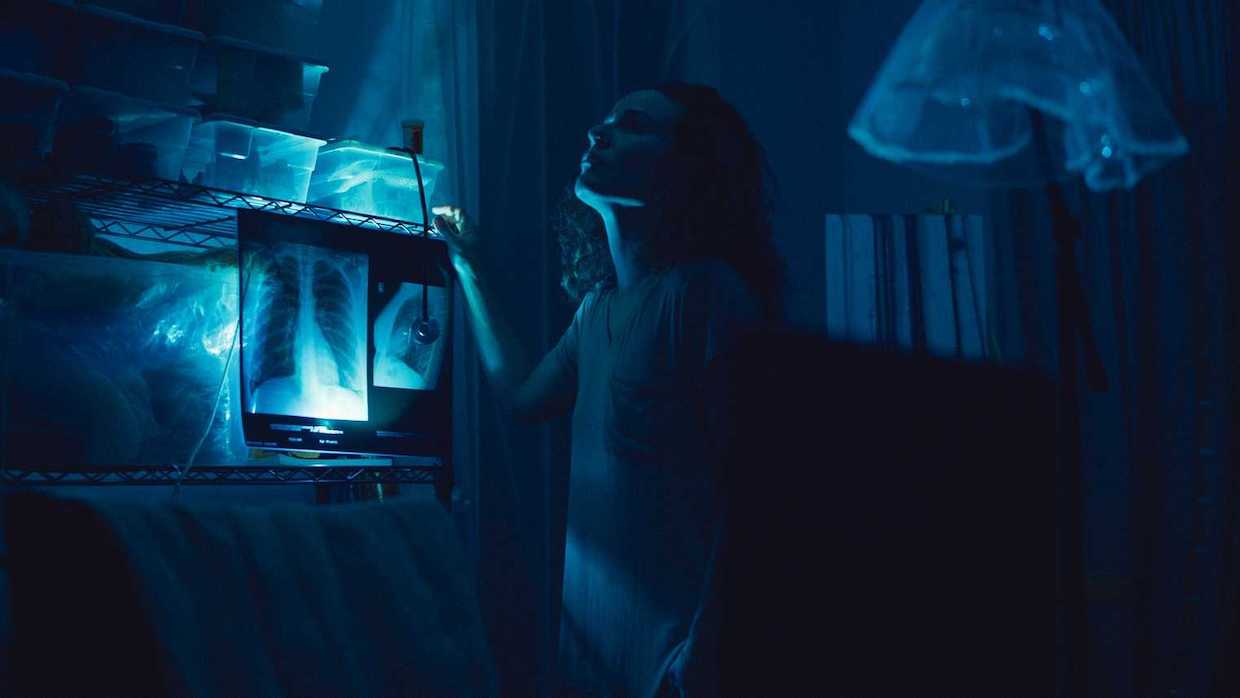 Midnight Family, Luke Lorentzen’s debut feature, was adeptly shot in widescreen by the director/cinematographer/editor, as is follow-up A Still Small Voice, which represents the inverse of its predecessor in several ways. The Midnight Family were a clan of private ambulance drivers in Mexico City, filling in a public healthcare gap for profit, albeit not much of one—chasing patients for payment, eating junk food because that’s all they can afford to fuel shifts on the nocturnal streets of Mexico City, which are obviously more likely to produce memorable images than a hospital’s perpetual faux-daylight. And while Lorentzen’s main subject, Mati Engel, certainly experiences a lot of strain as a hospital chaplain in training dealing with palliative/end-of-life care, she’s clearly undertaken a voluntarily chosen vocation rather than one demanded by the need for subsistence.

The first scene, and a substantial number of subsequent ones, has Engel in a room with a suffering patient, listening and talking with a person experiencing a terrifying bodily shutdown, but even more time is spent on managing the aftermath, both in group sessions and during one-on-one check-ins with her supervisor. This makes sense: the work is grueling, and managing emotional debilitation is accordingly and properly baked into the process. However, while the language of therapy can be incredibly useful to that end, it’s not exactly conducive to overt drama; everyone here speaks with scrupulous tentativeness and repeated reflexive professions of being present (“I’m here“). A dramatic arc emerges almost subliminally, as Engel grows increasingly frustrated with her supervisor and vice-versa, an antagonism both express in the idioms of the managerial performance review (“I’m wondering if we have mutually agreed goals”) and on-trend self-care (“I did feel your space for my intensity was waning”).

That makes the sole scene of explicit conflict (after HR gets involved—never go to HR, they won’t help!) all the more startling: suddenly everyone’s pissed and bluntly saying what they mean. This is the most compelling scene, in part because of the degree of difference with the preceding soft-spokenness it provides and in part because it underlines what all that carefully modulated talk was obscuring. Mati and her fellow chaplains-in-training aren’t experiencing burnout and lapses of faith within a spiritual sanctuary no matter how much they seem to be reciting Headspace formulas; they’re workers at a for-profit enterprise within a system of notoriously and normatively terrible American healthcare that imposes punishing administrative hurdles on both patients and healthcare workers. (Mt. Sinai, where the film was shot during peak pandemic times, just wrapped a three-day nurses strike less than two weeks ago.) It’s startling to be reminded of the surrounding context in a film so focused, as signaled by its title, on formally creating a hushed space for contemplating death and care that it seems to take place in a vacuum.

Glorimar Marrero Sánchez’s first feature La Pecera (The Fishbowl) has a different approach to terminal illness. It takes a little while to understand that artist Noelia (Isel Rodríguez) has had cancer before, and it’s now returning; wisely, the film slowly parcels out expository information, keeping some mystery intact for a while. Noelia’s initial reaction is equal parts imaginative and staunch denial: when she sees the amount of hair she’s shedding, she collects the strands, lays them on a table and uses the resulting shape as the basis for a sketch. That unorthodox response typifies Pecera in general, which approaches most scenes with just enough of a degree of difference from what’s expected to make it mildly surprising. E.g., after Noelia decides to impulsively flee San Juan to go visit her mother in Vieques, an old friend picks her up and gives her a ride. She rolls down the window and I worried there would be a stock “poetic” shot from the side of her waving her hand in the wind; instead, the camera observes from overhead as Noelia sticks her head out, face upwards to the lens, as much out of nausea as out of a desire to provide an image of the evanescent joys of life. And while the explicitly political film makes it clear that Noelia’s cancer is almost certainly the by-product of toxic metal emissions as a result of American weapons testing in Vieques, Noelia at all times behaves like an idiosyncratic, slightly malfunctioning human being rather than a Puerto Rican political martyr, while its final image is nicely symbolic in an unexpected way.

Sarvnik Kaur’s Against the Tide is a solid verite doc, cut to the relevant bones from what seems like mountains of footage. Her two subjects conveniently represent both the low and high economic ends of fishing amongst India’s Koli people and the divide between those who stay home and those who move to Mumbai. I won’t pretend to have known about the Kolis before seeing the film, which does a good job of providing context through seemingly organic exchanges rather than title cards and contextual talking heads. Rakesh represents the low end: he’s stayed home, practicing traditional fishing from a rickety boat, bringing back low hauls while worrying about sustaining his family and how climate change is soon going to render his practices irrelevant anyway. Ganesh is the high: he studied in Scotland before returning home to fish on a much larger scale, with bigger boats and more crew, but his net (heh) result is the same, with the massive expenditures required driving him into debt despite much larger yields. There is one nervewracking night-fishing expedition in the vein of the Stromboli gold standard for depicting the drawing up of large nets on Ganesh’s side and an equally unnerving section where Rakesh practices the ancient art of predictably dangerous monsoon fishing. Kaur follows the men’s family lives as much as their livelihoods, with editors Atanas Georgiev and Blagoja Nedelkovski repeatedly and elegantly staging discussion by cutting from close-ups of whoever’s in conversation to a large master shot from far away, resetting the speakers against cityscapes and the seaside, a welcome way of inserting regular doses of beauty into a film whose primary agendas are elsewhere.