“What Would the Spirit of These Influences Feel Like in Orange County?” DP Michael Fernandez on The Accidental Getaway Driver 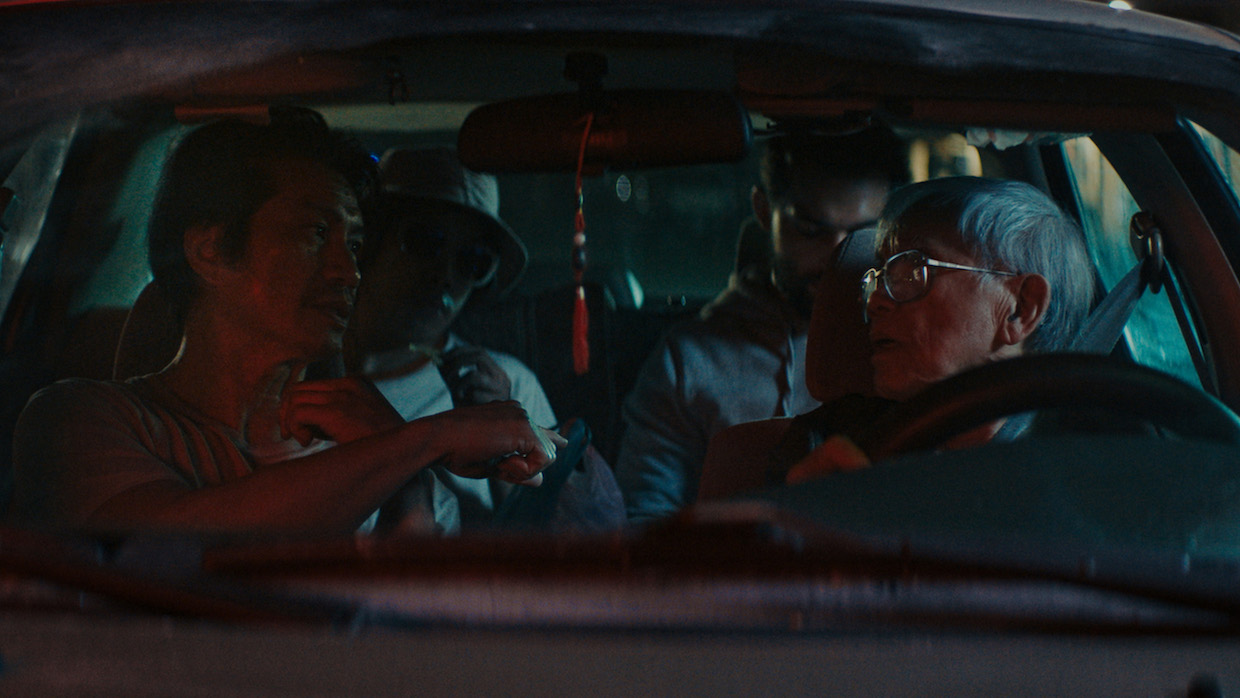 by Filmmaker Staff
in Cinematographers, Interviews, Sundance
on Jan 25, 2023

Collateral meets The Desperate Hours against the backdrop of issues of Vietnamese immigration and assimilation in this Orange County-set thriller that marks the feature directorial debut of music video director Sing J. Lee. Below, cinematographer Michael Fernandez discusses his work in filming this Sundance 2023 premiering thriller, in which an elderly Vietnamese cab driver is taken hostage by three recently escaped prisoners.

Fernandez: I had a built a relationship with the director over the last few years. We collaborated on some longform music album films for The Killers and Rich Brian. That helped us create a cinematic language including trust, love and spirit between the both of us, so by the time the feature came along we already spoke that language and wanted to do the project together. Filmmaker: What were your artistic goals on this film, and how did you realize them? How did you want your cinematography to enhance the film’s storytelling and treatment of its characters?

Fernandez: I think the goal is always to help tell a good story and one of the ways we could help tell it was by shooting it one camera. We wanted to control the compositions/movements and lock the characters in frame like the journey they were experiencing.

Filmmaker: Were there any specific influences on your cinematography, whether they be other films, visual art, photography or something else?

Fernandez: I think we were influenced by the likes of Edward Yang and Tawainese cinema, but also films like Le Havre, which you can see in some of the lighting setups. We asked the question, “What would the spirit of these influences feel like in Orange County?” Filmmaker: What were the biggest challenges posed by production to those goals?

Fernandez: Time was our biggest challenge, so keeping it simple and beautiful was helpful.

Fernandez: Alexa Mini and Hawk Anamorphics, Lomo Sphericals. In our past films the director and I shot spherical but he would put letterboxes on them. So, I figured, “Let’s shoot the real thing and get the benefit of the width and depth.” I’m not a fan of the horizontal flare, which I thought would be inappropriate for this narrative film, so we switched to the Lomo Spherical when the anamorphic flares became too much. Most of the film is contained in small spaces, so the anamorphic lenses helped me get to the four characters in one frame and challenged us to create interesting compositions and blockings.

Fernandez: I start with natural and build or take away from there until we capture the spirit of the scene. Filmmaker: What was the most difficult scene to realize and why? And how did you do it?

Fernandez: Some of the night driving scenes. A good part of our film takes place at night and in a car, so switching up the lighting on the four characters. I think we realized we could let the light fall off naturally when it needed to. Being in shadow also fit the actors’ characters.

Fernandez: We collaborated with our colorist before the film. He built a few LUTs for us for specific looks. We shot with these LUTs the entire film which was helpful in how we lit the film. He then took the film and worked from those LUTS. TECH BOXCamera: Alexa MiniLenses: Hawk Anamorphics, Lomo Spherical Lighting: HMI, LED, Tungsten Color Grading: Houmam