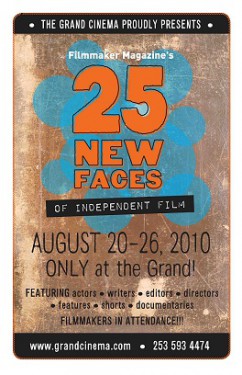 Today begins a week-long run at Tacoma, Washington’s Grand Cinema devoted entirely to films from this year’s “25 New Faces” filmmakers. If you live within driving distance of Tacoma, please check out this event and meet some of the filmmakers — 12 of the 25 will be attending.

From August 20-26 some of the best young independent filmmakers in the United States will have their work showcased at the Grand Cinema. Selected by Filmmaker Magazine as 2010’s “25 New Faces of Independent Film”, the Grand is proud to host films from 21 of these filmmakers. Equally important will be the question and answer sessions that will follow the films: we anticipate that 12 of the “25 New Faces” will be in Tacoma to watch and discuss their films with you. This is the only event of its kind in the country and we encourage you to watch these films that have never before played in Tacoma. They represent films from premier festivals such as Sundance, Cannes, SXSW, Berlin, Los Angeles and Seattle.

The complete schedule can be downloaded here.