by Brandon Harris
in Director Interviews
on Sep 22, 2010 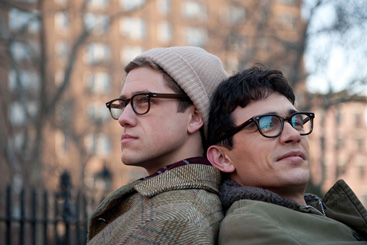 How do you make a narrative film about a long, difficult poem? Jean Cocteau’s legendary Blood of the Poet gives it a go I suppose, but its style departs from the conventions of narrative very early on for something more willfully avant-garde. Poetry just doesn’t lend itself to shot reverse shot and one hundred and eighty degree director’s lines. This clearly difficult task didn’t daunt veteran documentarians Rob Epstein and Jeffrey Friedman, however; they took up the challenge as they made the jump to narrative in Howl, a thoughtful meditation on the early life and seminal work of Allen Ginsberg. Ginsberg, who passed away in 1997, was the most famous of the beat poets. His first collection, which bears the same title as the film in question, was ruled obscene and subjected to an trial on its merits as art; Howl the film attempts to depict the beauty and abstraction of Ginsberg’s language in brave and lyrical fashion.

Far from a traditional biopic, the film uses elaborate animated sequences to capture the spirit of Ginsberg’s incendiary poetry while addressing in brief flashbacks the crucial if brief part of Ginsberg’s life in which he met and was shaped by other Beat generation figures such as Jack Kerouac and Neal Cassidy. This year’s opening night film at the Sundance Film Festival, Howl stars James Franco, whose impersonation of Ginsberg has already drawn its fair share of acclaim. Jeff Daniels, Mary-Louise Parker, Treat Williams, Jon Hamm and Alessandro Nivola also appear. 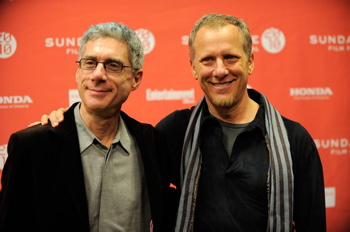 Filmmaker: The two of you have a strong background in documentary. What pushed you toward narrative for this project? It seems to lend itself naturally to documentary, no?

Epstein: We’ve always considered our documentaries to be narratives. We consider those non-fiction narratives. They are very structured, story centered, character driven. In that sense it didn’t feel like such a leap for us. We’ve long wanted to work in scripted dramatic narrative form. We’ve been thinking about that and developing projects for awhile, but this is the first one we’ve gotten mounted and this felt like it was a good transitional project in a way because it relies so heavily on documentary elements even though it is scripted and acted.

Filmmaker: You went about doing your initial research in a way that’s not all that different from your documentaries I imagine.

Filmmaker: At what point did you reach out to the Ginsburg estate about life rights?

Friedman: Actually the Ginsburg estate came to us. Bob Rosenthal, who was Allen Ginsburg’s secretary for twenty years, came to us in 2003 with the idea of a film commemorating the fiftieth anniversary of Howl.

Filmmaker: He knew your previous work?

Epstein: Yes. At that point we said, “yes, we’d love to”. Then we had to figure out how you make a film about a poem. That took us awhile.

Friedman: We came to a point where we were able to live with the material for a long time and immerse ourselves in everything Howl. We came to the conclusion that we wanted to do a film that was in the present tense and not a historical film of older people looking back on their younger selves. That directed us towards creating the young Allen Ginsburg as a character.

Filmmaker: At what point did you decide to hinge the narrative on the obscenity trial and the subsequent interviews with the contemporaneous Allen Ginsburg?

Friedman: It all came together at the same time while we were in the research and development stage and we were reading all this material, discovering the trial transcripts, reading interviews that Allen did throughout the course of his life, discovered the work of Eric Drooker and his graphic novels, so we were just digesting all this material and the outcome was the concept that we would work with all of these as our elements.

Filmmaker: Were you worried that because the outcome of the obscenity trial is never in doubt that the film would lack tension?

Friedman: That was certainly a dramatic challenge. We didn’t want to build off the trial as if we were building to that dramatic conclusion. We thought that the stuff that was going on at the trial was compelling and resonated both with the creative process and Allen’s story to allow us to create the narrative thrust through those juxtapositions.

Epstein: Each of the elements do have their own narrative and dramatic arc. The trial does, Allen’s story does, the poem does, so we carefully plotted out the arcs of each of those elements and how they interrelated with each other.

Filmmaker: You use flashback to elaborate on various relationships Ginsberg had with other beats like Cassidy and Kerouac. Was it difficult to make those fit within the structure of the film?

Epstein: Those were always imagined as memory sequences. We chose to do them in an impressionistic, improvisational style. We looked at beat films from the period, especially Pull My Daisy by Robert Frank to get a sense of how those people were making films, the people who were actually filming Ginsberg and Kerouac among others. So it was always conceived that way. Our budget realities also helped to inform some of the creative choices you make along the way. We had fourteen shooting days and a limited number of speaking parts so that was just part of the finite paramaters within which we had to work.

Filmmaker: What were some of the specific challenges of depicting the poem through the use of animation?

Friedman: We came across a book during our research called Illuminated Poems that Allen had published before he died with an illustrator named Eric Drooker who knew Allen and had grown up in the neighborhood and was a young artist who Allen had encouraged. So they had already begun this process of illustrating parts of Howl. So Eric had a real understanding of the type of visual representations that Allen responded to and the kinds that he didn’t. We worked with Eric to create sort of an animated graphic novel of the work that he an Allen had done.

Epstein: The concept of the animation was in the script. We had the key frames of the animation in the screenplay. If you read the script you can see where those animated sequences fall into the structure. We were excited about the idea of animation because we thought it would be a way to make the poem read as cinema. Within the story, you could have an experience of the poem unlike any other experience within the movie.

Filmmaker: I imagine it’s tough to find money to make a movie about a deceased Beat poet?

Friedman: It’s a miracle that we found money, it’s a miracle that we found producers. All along the way with this project the right people came to it for the right reasons. Mainly just because they so believed in it. That was true of producers, that was true of our star James Franco and every single cast member. They read the screenplay and responded to it and appreciated the approach.

Friedman: A non traditional, non-biopic of a biographical subject.