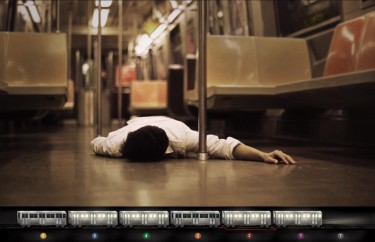 IFP invited a number of us to blog our experiences at Independent Film Week, and we were supposed to contribute three posts. But with a whirlwind of meetings, events, and networking opportunities to try to take advantage of, I haven’t had much time to sleep, much less time to blog. So here’s my one post wrapping up our experiences pitching our transmedia project 3rd Rail (pictured) during Independent Film Week, which will have to do in lieu of three progress reports.

For a great general description of the Project Forum and how it is configured, see Marc Maurino’s post. Marc was part of Emerging Narrative, whereas we were participating in the international co-production forum No Borders, but the two programs are set in the same hall and share the same basic setup. Both are part of the larger Project Forum, which also includes a third program, Spotlight on Documentaries (which are meetings centered around work-in-progress documentaries). All of the above are basically speed-dating, but instead of males meeting females, it’s filmmakers meeting producers/financiers/sales agents/distributors. Perhaps it’s the other way around, and the filmmakers are the females and the companies are the males in that analogy. Either way, I’m going to avoid saying anything further to avoid making an assumption about who’s trying to screw whom — in either dating or pitching relationships. Basically you’re trying to find someone to get in bed with, so that the two of you can give birth (to a film).

Anyway, partially due to the fact that my project (along with co-writer/director Zack Lieberman) is part of the aptly-named No Borders, we met with a lot of international sales agents. Now, 3rd Rail is in a unique position because it’s a transmedia, interactive project first and a feature film second. I say “transmedia” not to imply that we’re going to promote the film through Twitter or comic books (though we may… ), but rather that 3rd Rail is a cross-platform, connected experience from the ground up. In fact, it’s interactive in a manner that blurs the line between “movie” and “game,” and in an effort to better demonstrate the project in action, we shot a demo of our project last week and showed it during our pitch on an iPad. It’s a murder mystery set on a New York City subway, so shooting a demo was a bit more complicated (I’ll just say that stealing a last-minute shoot on the subway in post-9/11 New York isn’t the easiest thing — the transit police were notified). For more on the project, see http://3rdrail.tv (we might be posting the aforementioned demo in the days to come).

Despite having a demo, however, the fact that 3rd Rail is an interactive experience made meeting with traditional theatrical sales agents feel like a bit of a mismatch — provided they weren’t open to new distribution models. Some of our pitches went great, as we were able to convince folks that this new approach offers not only new viewing experiences, but also new revenue streams. Because I’ve spent the past year building up my own online audience at NoFilmSchool, I’ve learned a lot about online monetization (to the point where that site now pays my rent); Zack runs online development for a Sony Pictures Television property that gets millions of views a day. Thus we feel well-positioned to talk about online revenue streams — and it was our job to convince others of the viability of these new models. But some pitches were more laborious, with sales agents focused steadfastly on their established models (which include nothing about webisodes, online advertising, app sales, subscription plans, upsells, and the like). To me, it was representative of a stark contrast between the old and new. In some situations I felt like adapting Mark Wahlberg’s line from The Departed, shouting, “I’m the guy that’s trying to do something new. You must be the other guy!” (But I didn’t, of course.)

When it comes down to it, audiences in independent film aren’t getting any younger. Ted Hope even had an IFW panel devoted to this topic. But our logline for 3rd Rail didn’t make it clear that it was an online/interactive film first and foremost, so more than once we were pitching to someone who thought the project was a standard feature. Murder mysteries tend to skew older if they’re not slashers — think Mystery on PBS. But we believe 3rd Rail will appeal to audiences young and old. It may even be a “four-quadrant film,” to use Hollywood marketingspeak — that is, it appeals to males and females both young and old, because older women love whodunits (at least, our moms do), and we think the interactivity will draw in younger, tech-savvy audiences. It was probably one of the more commercial projects at IFW, because we’re not beating around the bush with our goal to make something that’s really fun. But this doesn’t mean it’s an easy sale; far from it, as we’re technically first-time feature directors (our previous project was the guerilla web series The West Side), and there isn’t an established business model for this kind of project. But the old business models are collapsing, and that means the time is ripe for something new. Something like… 3rd Rail!

You can tell we’ve been pitching it all week. As the Project Forum wraps up, I genuinely believe No Borders will end up being the difference between us getting our project made sometime in the foreseeable future, and putting it on the shelf to be dusted off at an undetermined later date. We couldn’t be happier about the experience, and I’m not just saying this because this is the Filmmaker blog. Without the opportunities collectively provided by IFP, I shudder to think of where we would be as filmmakers. No bullshitting — we couldn’t be more thankful.

So if you’re reading this, by all means apply to next year’s Project Forum and the other upcoming labs and opportunities. Because while Kickstarter and IndieGoGo are a great way of raising relatively small amounts of money — and I’ll be launching my own crowdfunding campaign for a different feature in the months to come — to get an independent project made with a large enough budget to actually pay people (and yourself), you’re going to need to get someone in the industry on board. That, or you need to convince any rich people you know to give you money. But since rich people are hard to come by these days — and since independent film is rarely the best investment from a pure business standpoint — I’d recommend trying to get IFP on board. They can open a lot of hard-to-open doors for you, as they have for us.