Over the course of the past decade, Lucrecia Martel has established herself as one of the most gifted and original filmmakers around. The Argentine auteur was born in Salta, a city in the northwest of Argentina, in 1966, and spent her teenage years capturing much of her family’s daily life on film. In 1986, she studied Communication Science and had stints at two film schools, Avellaneda Experimental, studying animation, and the National Experimentation Filmmaking School in Buenos Aires. However because she never finished her film studies (one of those schools shut down due to lack of funds), she ultimately completed her cinematic education on her own and considers herself to be self-taught. In the late 80s and early 90s, she made a string of short films, starting with the animations El 56 (1988) and Piso 24 (1989), and culminating in the award-winning live action Rey Muerto (1995). Martel subsequently made documentaries and children’s programs for Argentinian television, and in 2001 she got her breakthrough with her feature debut, La Ciénaga, an unsettling, off-kilter portrait of a family’s summer slumming it at their crummy country home. The film premiered at Sundance, won the Alfred Bauer Award at Berlin, and received rave reviews wherever it played. Martel’s 2004 follow-up, The Holy Girl, about the sexual and religious passions of two Argentinian teenage girls, premiered at Cannes and consolidated Martel’s reputation as one of the finest emerging talents in world cinema.

Martel’s third feature as writer-director, The Headless Woman, sees her return once again to her native Salta, where her previous two movies have also been set. The film’s protagonist is Verónica (María Onetto), a glamorous middle-aged dentist whose comfortable, untroubled existence is disrupted when she runs over something in the road. She initially thinks she just hit a dog, but over time she grows convinced that it was actually a person. Inspired by nightmares Martel herself had of having killed someone, The Headless Woman has a strange dreamlike quality, existing in a world that feels both palpably real and strangely detached. Martel’s movie is not plot-driven, but instead focuses on conveying Verónica’s disintegration as she becomes consumed by guilt for what she has – or thinks she has – done. Though complex, challenging and sometimes frustrating, The Headless Woman, with the superb Onetto’s underplayed, nuanced performance at its core, is also haunting and mesmerizing, and possibly the purest piece of cinema you will see all year.

Filmmaker spoke to Martel about turning nightmares into films, her fascination with water and the Spinoza quote that encapsulates her worldview. 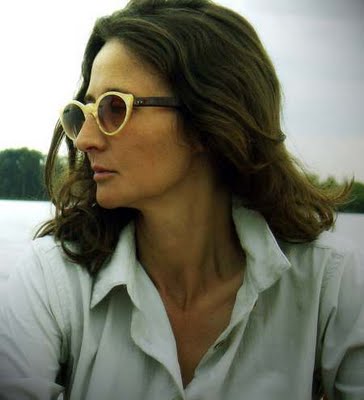 Filmmaker: What was your inspiration for this film? In your director’s statement, you say that your nightmares about killing someone led to the idea.

Martel: Nightmares were useful for me even though the film was not at all based on those nightmares. Like many people, I have sometimes dreamt that I have killed. They are not dreams where I am in fact in the middle of killing or about to kill someone, but dreams where I have already killed and there is nothing that can undo that horror. The most anguishing thing in my dreams is that I am being protected by the people who love me to avoid anything coming out. That mechanism of oblivion, of pretending that nothing has happened, is, in its core, the most frequent horror of our society.

Filmmaker: How did you translate the feeling of a dream to the film? And did you try to apply dream logic to the events?

Martel: I don’t know how that is done, I don’t even try to. Maybe that is the consequence of an attitude that I keep during production: when I look through the camera, I feel that there is something about to be revealed and which is actually not what I am seeing. I believe that generates a certain unreal atmosphere.

Filmmaker: How personal is this film to you? How much of yourself and your view of the world is in each of the films you make?

Martel: I believe that making a film is the search or the will to try and transcend the solitude of the body: to make everyone else participate in a certain perception of the world and to put it in check between everyone. It is not possible for me to construct those tricks that are films if I don’t do it based on those experiences and emotions that we have lived.

Filmmaker: The film is set in Salta, where your films always take place. Is that location very important or evocative for you?

Martel: I was born in Salta. It is my native city, and therefore a mythological landscape where one brings together all times and all affections. It is where spaces overlap. It is a fake geography, because I don’t believe it is Salta anymore, but the wish of bringing a sense to things, even if it is just for seconds.

Filmmaker: How do you construct a film? Do you plan out each scene and each shot exactly, or are you much looser?

Martel: The script is very similar to the film. I hardly improvise anything. Of course, there are times when things happen during the shooting and one can incorporate those, but I am always very careful with that. The system that I use to write is very similar to the sound mix. It is like an overlap of different layers that I mix in different proportions in each scene. Those different layers are always present throughout the film. When one works with such system, improvising can unbalance the film completely.

Filmmaker: What are your scripts like? Your films are less about the words spoken by the characters than they are images, sounds, moods, so do you write all of that down?

Martel: They look a lot like the films, I think. There are three things that define for me the way I approach cinema: my mother tongue (Spanish), the oral tradition of storytelling (above all, from my grandmother and my mother), and my ideas for the soundtrack. But they are things that come before the script, and the script is formally the same as any script, I think.

Filmmaker: María Onetto is in almost every scene of The Headless Woman and the amazing performance she gives is at the very center of the film. How closely did you work with her? Did you give her very clear notes on Vero’s thoughts and feelings in each scene, or did you leave it up to her interpretation?

Martel: The only thing that worried Maria and me was not to construct a character around guilt or the amnesia. She is an incredible actress who takes very mysterious paths. Secrets enchants me and Maria can make a sea of secrets out of nothing.

Filmmaker: People have tried to understand The Headless Woman in very literal terms. How do you feel about that? Is there one correct way of interpreting the film?

Martel: Well, a film is an emotional and intellectual process (that to me is almost the same) that only has meaning in the relationship that’s established between spectator and the film, but not from itself. Literalness is the desire or the misfortune of not being able to establish that relationship.

Filmmaker: Death (or the shadow of death) is very present in both this film and La Ciénaga. Is it a major theme for you as a filmmaker?

Martel: No, my main preoccupation and diversion concerns perception and all the moral issues that arise from its domestication.

Filmmaker: Water is a motif in all your films, in this case the storm. Do you still live on a boat? And what special significance or meaning does water have to you?

Martel: I believe that you have misinformed. I have a small boat, but never I have lived on it. I am an inexpert sailor but a great lover of boats. It is in the combination of the narrowness and the infiniteness of the landscape where the boats move. And, of course, they float, which fascinates me. Perhaps water fascinates me. I hadn’t realized this until they asked me this question to me on each of my three films.

Filmmaker: You describe yourself as self-taught, so do you see yourself as part of any particular cinematic tradition? Who are the filmmakers who you most admire or want to emulate?

Martel: I am in cinema because of the influence of my grandmother, who told stories to me, and because of my parents, who told me films and stories. In the world of the cinema, I feel like an impostor. I belong to the ranks of family conversations, stories at siesta time, long telephone calls, etc. I admire very many film directors, but like distant relatives who you wouldn’t invite for Christmas.

Filmmaker: What influence did your training in animation have on you?

Martel: It made me understand that movement defines the characters.

Filmmaker: You said in a previous interview that you were adapting a comic book about the Cold War in the 1950s. Is this an American project? Do you want to make movies in other countries?

Martel: I was working on that. The process of adaptation is fascinating. But now I have returned to a script that I was writing before The Headless Woman which is also in the fantasy genre, and also is about a deadly invasion.

Filmmaker: If the world ended tomorrow, what (if anything) would you be sad about that you hadn’t achieved?

Martel: It is the most distressing question you can ask someone who does not have a clear vocation.

Filmmaker: Which phrase best describes your philosophy on life?

Martel: It’s from Spinoza: “Nobody knows what a body can do.”

Martel: Well, to have one’s own way of seeing the world is a risk. But it is clear that that is not necessary to make a film. Thousands of hit films confirm this.

Filmmaker: Finally, what’s the last dream you can remember having?

Martel: I am walking along Loyola Street, in my neighborhood. Everything is exactly like in waking life, except that I suspect that I am dreaming. I try to pay attention to things, front gates, poorly maintained paths, the noise of the cars, the people who I pass, but I do not find anything to confirm my suspicion. Contrary to how it may seem, it is a funny dream. There is a construction site which has a sign on the front that states the characteristics of the building. In dreams, I can never read: if a letter or anything I need to read appears, I wake up. I approach the sign to confirm that I am dreaming, but before I can get there a neighbor asks me something from the front path. I can’t hear them well, and they repeat the question, calling me by another name. I look at my hands, and they are not mine. I do not remember any more, but I did not awake up then.