After Sam Green and Dave Cerf premiered their “live documentary” Utopia in Four Movements at Sundance, I wrote the below as part of a Sundance wrap-up at FilmInFocus. 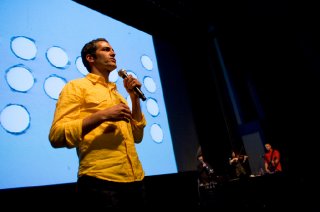 Also part of New Frontier was Sam Green and Dave Cerf’s Utopia in Four Movements. In what was billed as a “live documentary,” filmmaker Green, who previously helmed the doc, The Weather Underground, explores a precondition for revolution: a shared vision of utopia. The score was composed and played live by The Quavers (Catherine McCrae, Dennis Cronin, T. Griffin, and Cerf), and Green did live voiceover over film clips and slides. Recalling at times Errol Morris’s brilliant documentary Fast, Cheap and Out of Control, Green wondered if the utopian urge is still alive or whether it’s been crushed by the large-scale genocides and small-minded consumer culture of the 20th century. To ponder this he isolated four unlikely and oddball examples of what he viewed as utopias lost, including the failure of Esperanto to succeed as a universal language and eradicate world conflict; the economic collapse of the world’s largest shopping mall in China; the sad flight of an indicted American revolutionary and fugitive to Cuba, which takes her away from her children; and, finally, the work of forensic anthropologists, whose work puts closure on the past for the families of genocide victims. Green’s piece had a charm to it, much of it deriving from his sincerity as narrator and the poetry of the piece’s quixotic goals. Perhaps appropriately, the piece, which began by placing “utopia” within a historical frame, tracing it from Sir Thomas More onward, had a hard time finally answering its central question; retreating from historical analysis, it refused to declare utopia dead, finding the seeds of its renewal in such ahistorical values as “hope” and “faith.” Still, the idea that one could reintroduce the concept of utopia to a jaded 21st century audience through the power of the spoken work, three musicians, and a video projector was perhaps its own utopian gesture and thus the piece’s true ending point.

After having been on the road for almost a year with the piece, Green and Cerf gave it a sold-out New York premiere at The Kitchen this weekend. I spoke with Green last week for a few minutes while he was rehearsing, and our conversation is below.

Filmmaker: So, how has the piece changed since its premiere at Sundance last January?

Green: We’ve done this now 20 or 25 times, so a lot has changed. One of the cool things about doing something live is that you can make changes and see what works and what doesn’t. After each show we tweaked things. And thee band does a lot more music now. We didn’t have enough at Sundance to justify them being a band [on stage]. Now, the band plays in about 85% [of the show], and at The Kitchen, Brendan Canty played drums.

Filmmaker: What about the script? Did that change?

Green: There have been a lot of different changes, but it’s basically the same piece. We tried out a new ending [before opening at The Kitchen], but we wound up scrapping it. It has been interesting for me to see the editing process involved with the live component. You make changes over the time, and you hope the experience is more engaging and works better.

Filmmaker: As a filmmaker not only creating a theater piece for the first time but also performing one, what was your development process like? Did you direct yourself or work with another director?

Green: When we were getting ready for Sundance, I worked with a theater director, David Ford, in San Francisco. That was invaluable, I don’t come from any performance background at all. Writing for talking out loud is so much different than writing for print or even voiceover. You can accomplish so much with your facial expressions, and the way you say things can communicate everything [you need to say] without all those extra words. That was a huge revelation to me. He was also good about having me do all those actor-things, like making funny noises to warm up. I was always embarrassed to do that stuff, but it was good.

Filmmaker: What I liked about the piece is that it’s about the idea of utopia but it almost seems to embody a utopian gesture itself. In this era of online video and networked communication, you’re taking media back to a more intimate and innocent time. What has been like to both promote the piece and then to connect with your audiences in these live settings?

Green: It’s definitely a challenge to get it out there. It’s harder to promote because, what is this thing? A movie or a performance? I agree with you — the form is a utopian gesture in this day and age with with people watching things on their iPads and iPhones. But there is something about the live cinematic experience that is very lovely. It’s something you’re seeing a lot of bands getting involved with. And old friend, Sarah Jacobson, said the film world is always a couple of years behind the music world in terms of distribution and business. In the music world you have to tour, so it seems pretty inevitable that the movie world will get to that point too. I’ve learned a lot from Brent Green. He is smart and tours all the time. But one thing that makes it a little less noble is that in the regular film world, it’s a tough time to put out a weird doc like this. And we are making way more money than you would with a more conventional movie. The art and performance worlds are set up for dance groups, and performers who get performance fees. The difference between a performance fee and a screening fee is huge. And even though far less people will see [Utopia], it’s more meaningful for the ones who do. I’d rather have less people see it but have it be more meaningful.

Filmmaker: As a filmmaker without a foot in the performance world, did you experience any problems getting booked?

Green: I think people are open to genre crossing these days. Programmers [would think], oh, a film person doing a performance — that sounds really cool. Most programmers want to broaden out, and they know that the etched-in-the-sand divisions between genres are blurring. I’ve been surprised by how open people are. But at places like the Walker and the Wexner, the film programmers were the people who got in touch with us, and they roped in the performance people.

Filmmaker: Will Utopia ever live on in a film version without the performance component?

Green: I am making the individual parts into their own films. I made a 30-minute film of the “world’s largest shopping mall” segment for POV, and I’m doing the same with the Esperanto segment. And at some point we’ll shoot a performance of this so at least we have a record. I don’t know how much it’s going to work as documentation.

Filmmaker: One thing I was struck by is that while the piece starts by considering the concept of utopia in historical terms, it resolves on strictly personal ones. I’ll admit to feeling that the question of whether the historical conditions needed to imagine utopia still exist was sort of lost.

Green: It’s hard for me to know that because I’m not objective. The piece comes out of personal feeling — trying to come to terms with the world today. It’s about being hopeful and looking at the idea of utopia, which people today use only as a pejorative. Bringing it back to a personal level was a way to end [the piece], something that people could connect with. I feel like the piece weaves the historical and the personal.

Filmmaker: What question in your own mind did the process of doing the piece answer for you?

Green: The question for me after making The Weather Underground was, why is this such an anti-utopian time? Why are young people doing nothing about the world? Doing the piece gave me a greater appreciation that 20th century history casts a shadow over all of us. So many of the century’s big ideas have been discredited. Obama’s election was a striking outpouring of hope, but two years later it’s been burned out.

Filmmaker: Do we need to maintain the idea of utopia?

Green: I’m never anyone to tell anyone else what to do. Me, I love the idea of utopia. It’s good for my spirits, and I think it’s good for people’s imagination. We can use a little more imagination.

Filmmaker: What is your personal idea of utopia?

Green: There are different levels. There is a utopia where everyone has enough food and clothing, where there are decent material conditions, and that is entirely doable. We could accomplish that. It’ s not some crazy fantasy. And you can go from there and get progressively less realistic.

Utopia in Four Movements – Trailer 1 from Utopia on Vimeo.