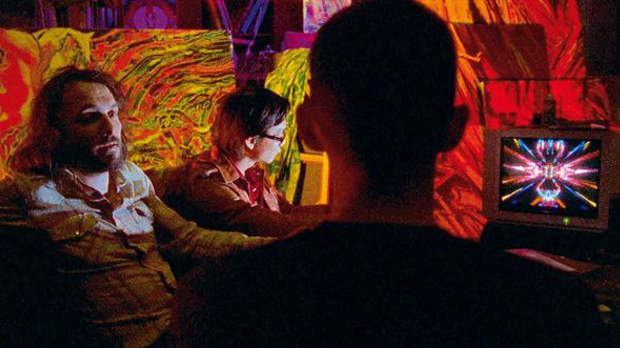 The Further Adventures of Death Tripper, Ouroboros and What lies Beyond Jupiter

Cannes, France. In a cinematic year filled with visions of extreme sex and violence, the enfant provocateur of French cinema Gaspar Noe illuminates a phosphorescent direction forward. In person Noe could be mistaken as the progeny of Aleister Crowley with sunken-in, charcoal-lined eyes and shaved head. But lurking behind this visage is a filmmaker who courts controversy with vivacity and confidence. The last time Noe was at Cannes was to premiere his film Irreversible; he ingratiated himself into the hearts and minds of audiences willing to be subjugated to his extreme vision of rape, revenge, murder and ultimate transcendence. This year, Noe unveiled his psychedelic mind-bending odyssey of life after death, Enter the Void. A philosophical tour de force disguised as a generational drug film. The film’s hypnotic imagery and unnerving soundscape is at the forefront of cinematic revolution — it is a work of startling complexity, paradox and perversity. A film born of the avant-garde tradition of Paul Sharits, Peter Tscherkassky and Kenneth Anger. Noe is the inheritor of this tradition in the 21st century and the film can be seen quite liberally to have transposed the ’60s fascination with occult mythology, Egyptian monuments and sacred sites for the totems and taboos of the new millennium cybernetic generation of virtual reality. One could imagine Noe directing the film through a PS2 video-game joystick to capture the stunning array of hypnotic imagery and virtuoso ballet mecanique camera movements. In the crackpot Cuisinart of ideas that propel the narrative, Noe creates a cosmology composed of DMT shamanic drug lore, Nietzchean eternal recurrence theories and Buddhism’s transmigration of Souls.

The story opens with Oscar, a lanky twenty-something Canadian expat, as he lights up a drug pipe in the shabby Tokyo Shinjuku apartment he shares with his kid sister. As Oscar inhales DMT, a concentrated form of ayahuasca, one of the strongest pyschedelic substances on earth, Noe invites us to slip through the proverbial rabbit hole and trip the lights fantastik with his protagonist as he drifts into a DMT day-glow slumber in a visual sequence mirroring a Buddhist mandala cornucopia that plays out in the real time of the six minutes it takes the drug to intoxicate the system. Oscar receives a call from a friend to join him at a nearby Red Light District bar. Oscar is initially too stoned to make it out of the house, but convinces himself otherwise when his friend Alex shows up and begins ranting to him about drugs and the Tibetan Book of the Dead. The two friends trot and stumble to a nearby Kabuki-cho bar called the Void, a sort of post-modern Karova milk bar for acid freaks where images from Kubrick’s 2001 play on TV monitors; no doubt an homage to the maestro whose visual lexicon presides as patron saint to this film.

After a skirmish at the Void, a result of a drug deal gone wrong and a betrayal by a friend to the cops, Oscar is shot in the back several times by the local police and lies dying in a urinal. The camera takes on the subjective perspective of Oscar’s spirit, a bird’s eye viewpoint that most of the film is seen through. We are witnessing the out-of-body experience of death and the camera soars with an omniscience that defies rules of logic, merging cinematic space in a collected amalgamation of associative memory, sensorial experience and projected fantasy and nightmare. So Noe invites us to Enter the Void. A virtual universe governed by the psychic abilities of the mysterious pineal gland or third eye with the only travel guide a copy of the Bardo Thodol (or, Tibetan Book of the Dead). Noe forces his audience to contemplate themes of life after death with a tricky formalism that exists on a plane of its own unique in the world of cinema.

The narrative structure although seeming to appear as a series of complex interrelated flashbacks is actually operating on principals similar to what is encountered in Proust’s masterwork and conforming to the structural logic of the Bardo Thodol. As Oscar’s spirit journeys through his own consciousness and awareness of events immediately post mortem, he is processing his own resignation to let go of his corporal body and begin his journey into the next stage of incarnation.

While dismissed by some viewers and critics as a trite and illogical series of flashbacks, the seemingly random connection of scenes Noe portrays have the narrative arch of how memory functions often incomplete and without clear definition or traditional dramaturgical structure. As Oscar has taken DMT at the opening of the film we are literally viewing the entire film through an unreliable narrator’s subjective viewpoint amidst the quagmire of a hallucination, further enhanced by the cerebral construction of his death trip. Enter the Pineal Gland, Dr. Strassman and Terence McKenna

The pineal gland is a cone-shaped pea floating in a small lake of cerebrospinal fluid that sits on the roof of the third ventricle of the brain; it is also referred to as the third eye chakra. It is the first gland to be formed in the fetus distinguishable by the third week. When our individual life force enters our fetal body at seven weeks, the moment in which we become truly human, it passes through the pineal and triggers the first primordial flood of DMT. Much speculation over this mysterious gland has occurred throughout the ages as it is the appendix of the brain, serving no known function in the body, and therefore prompting a vast degree of conjecture, especially amongst poets, priests, writers and shamans who value the mystic experience. Dr. Rick Strassman, while conducting DMT research in the 1990s at the University of New Mexico, advanced the theory that a massive release of DMT from the pineal gland prior to death or near death was the cause of the near death experience (NDE) phenomenon. Terence McKenna — writer, philosopher, psychonaut and ethno botanist who served as the inspiration for the Dr. Jacoby character in David Lynch’s Twin Peaks series — believed the pineal gland to plays a role in mediating the visual effects of natural dreaming, near-death experiences, religious visions and other mystical states. Rejecting any monotheistic tradition, McKenna praised DMT as trans-dimensional travel…enabling an individual to encounter aliens ancestors and spirits of the earth. Also stating that as the life-force leaves our body through the pineal gland, a naturally occurring tryptamine trace amount of DMT floods the brain mirroring the experience of life developing in the first weeks of fetal development. The set of theories about the pineal gland offer a cyclical structure to the emission of DMT in the body upon birth and death and present a fascinating parallel to the Buddhist conception of the universe and the cycle of reincarnation. Enter the Bardo Thodol.

The central tenet of Buddhism states that all life is suffering and one is destined to pass through the cycle of suffering and rebirth, samsara, until a soul can progress to a state of Nirvana. Rebirth is a process whereby beings go through a succession of lifetimes as one of many possible forms of sentient life, each running from conception to death. Noe’s cosmology is a hybrid of Buddhism’s cycle of life and the idea of Eternal Recurrence, an idea posited by Pythagoras, Ouspensky & Nietzche. The eternal recurrence is a concept that posits that the universe has been recurring and will continue to recur in a self-similar form an infinite number of times. A cycle of non-linear time where moments are destined to play out and cycle infinitely. Imagine being able to walk into the house you grew up in and discover that you are still sitting there as a child as if the memory plays out consecutively with the same moment you are currently living. Enter the Search for Lost Time.

As in Irreversible, Noe centers his story on the idea of origin points, a Manichean battleground from which all went wrong — as if signaling for a return to the innocence before all was perverted & corrupted. As Oscar’s spirit hovers through the realm of his memories, his soul is trying to process his previous existence as if searching for reconciliation with his past. He can’t get over the random stroke of fate that has rendered him alone in the world with his sister. One of the most shocking memories recounted in the film involves a car crash that both Oscar and his sister survived but which killed their parents, rendering them orphans. Oscar cycles through a rapid series of memories that intertwine; many tender moments with his kid sister are seen as halcyonic and nostalgic. The brother and sister made a bond that they would always be together in life, and Oscar’s spirit watches his sister with a vigilance that verges at times on eroticism and voyeurism. As Oscar’s web of memories become more conflicted, it feels as if his soul is being punished. Somehow the memories he has accumulated in his lifetime are the sole company he has to keep in the afterlife, and the traumas and elation that compose our emotional life are what must be processed in order to let go in the spirit realm and reach the next level of incarnation. As the narrative reaches a climax, Oscar enters a Tokyo Love Hotel where the camera surveys a series of rooms with lovers in the peak of copulation. A phosphorescent array of colors emanate from the couple’s genitals as if potential souls are awaiting penetration in hopes of reincarnation. The final stage of the Bardo Thodol speaks about karmically impelled hallucinations; men and women passionately entwined. Oscar’s spirit discovers his sister in a room having sex with his friend Alex. Oscar enters his sister’s body where he is witness to the sexual act, eventually merging with a fertilized egg. His soul is reincarnated as an infant, born inside his Mother’s womb again; somehow destined to relive his life over again.

Speaking with Noe after the film about the elusive meaning of the film’s ending, he laughed hysterically saying, “The cock comes all over the audience….” Perhaps the answer lies in what is perhaps one of the more unique close-up’s since the famed closing of Hollywood Boulevard. Perhaps Oscar has reached the final frontier of cinematic reincarnation, a phosphorescent sludge fest for the eye.

After graduating from Tisch School of the Arts, Michele Civetta signed a production deal with HKM Productions / Directors Bureau. Since that time he has helmed numerous projects for an array of commercial clients ranging from Martini & Rossi, Cingular Wireless, Badoit, Dunkin’ Donuts, Coca Cola to The Partnership for a Drug Free America. Civetta has also directed music videos for artists such as Lou Reed, Sparklehorse, and Yoko Ono. In 2006 he wrote and directed the critically acclaimed musical feature for Sean Lennon’s Capitol Records release Friendly Fire starring Lindsay Lohan, Asia Argento, Carrie Fisher & Devon Aoki. Civetta is currently in pre-production on a film based on the international bestseller Coin Locker Babies that is scheduled to shoot this Fall in Japan. The film is a co-production between Don Murphy’s Angry Films and French company Wild Bunch and stars Gael Garcia Bernal, Jamie Cambell Bower, Rinko Kikuchi, Asia Argento, Tadanobu Asano and Val Kilmer. Mr. Civetta is also prepping a film with Agnes B/ Love Streams productions based on the life of the Chevalier de Saint George.

Mr. Civetta currently resides in Rome with his wife Asia Argento and their two children. The couple produce a radio show featuring lost eclectic music for broadcast all over Italy and are preparing a new film for Mrs. Argento to direct.