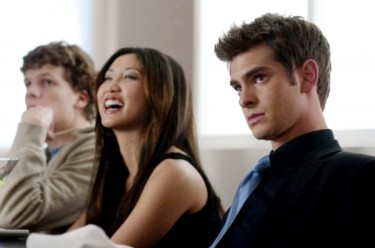 Amidst the widespread acclaim for David Fincher’s The Social Network have been criticisms that the film is sexist in its depiction of the Harvard social scene and the seemingly all-male world of computer programmers that combined to create Facebook. As Xeni Jardin noted in Boing Boing, the film fails the Bechdel test. Others have asked why screenwriter Aaron Sorkin didn’t create a role for Priscilla Chan, Facebook founder Mark Zuckerberg’s longtime girlfriend, who was in the picture (although, apparently, not romantically so) during the timespan of the film. In the Daily Beast, Rebecca Davis O’Brien asked where in the film were women who weren’t “doting groupies, sexed-up Asians, vengeful sluts, or dumpy, feminist killjoys.”

The Social Network draws a parallel between final clubs and early Facebook. Perhaps in attempting to illustrate the gender divisions and inequalities at Harvard—which the film implies were part of the inspiration for thefacebook.com—Sorkin and Fincher deliberately portrayed women through the eyes of the male antiheroes.

If this was the case, [Jezebel website founder Anna] Holmes suggested, they might have offered more criticism of the gender dynamic, rather than letting art imitate bigotry. “You also have to ask—well, are they using shots that linger on women’s bodies because that’s the way these male characters look at women, or because its cinematic eye candy?”

Aaron Sorkin can write some pretty badass female roles: C.J. Cregg of The West Wing is an enduring favorite, along with the women of A Few Good Men and Sports Night. At Harvard, Zuckerberg had female friends. Was there no room in this film for a good female character, or was Sorkin trying to make a point about where women fall in the world of male ambition? Said Holmes: “You can have a movie about a rock band with groupies and still humanize the groupies.” And there are plenty of films with no female characters at all that are not misogynistic.

A nuanced view is put forth by Elissa Bassist at The Rumpus, who writes:

The movie portrays a sexist world. This does not make the movie sexist; it merely holds up a fun house mirror to its audience. We live in a network of men getting what they want at the expense of women. They are doing what I’ve always wanted to do myself, and they are screwing me while doing it. If you see this movie and you don’t admire them, you’d be wrong not to.

Over the weekend, Sorkin himself addressed the issue with a lengthy comment on TV writer Ken Levine’s blog. He responded to another poster, tarazza, who wrote:

also loved The Social Network, except for one thing– the lack of a decent portrayal of women. With the exception of 1 or 2 of them (Rashida Jones included), they were basically sex objects/stupid groupies…. kinda makes me think that Aaron Sorkin (though I love his writing) failed the women in this script. Kind of a shame considering he’s written great women characters like C.J. Cregg!

Noting, “Having Aaron Sorkin contribute to your blog is like having Vin Scully agree to call your Little League game,” Levine gave Sorkin’s reply its own post, which I’m linking to here. An excerpt:

It’s not hard to understand how bright women could be appalled by what they saw in the movie but you have to understand that that was the very specific world I was writing about. Women are both prizes an equal. Mark’s blogging that we hear in voiceover as he drinks, hacks, creates Facemash and dreams of the kind of party he’s sure he’s missing, came directly from Mark’s blog. With the exception of doing some cuts and tightening (and I can promise you that nothing that I cut would have changed your perception of the people or the trajectory of the story by even an inch) I used Mark’s blog verbatim. Mark said, “Erica Albright’s a bitch” (Erica isn’t her real name–I changed three names in the movie when there was no need to embarrass anyone further), “Do you think that’s because all B.U. girls are bitches?” Facebook was born during a night of incredibly misogyny. The idea of comparing women to farm animals, and then to each other, based on their looks and then publicly ranking them. It was a revenge stunt, aimed first at the woman who’d most recently broke his heart (who should get some kind of medal for not breaking his head) and then at the entire female population of Harvard.

Read the entire reply at the link.