“WO AI NI MOMMY” AT STRANGER THAN FICTION

by Mary Anderson Casavant
in Filmmaking
on Nov 3, 2010 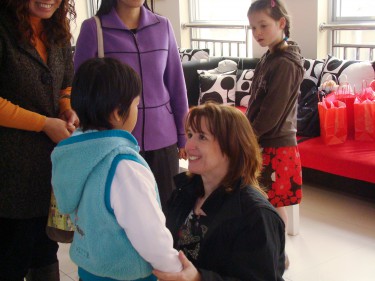 While introducing Wo Ai Ni Mommy (I Love You Mommy) at last night’s Stranger Than Fiction, programmer Thom Powers thanked the Sadowsky family for allowing director Stephanie Wang-Breal to document their experiences adopting an eight-year-old girl from China, pointing out that “it’s not an easy thing to let a camera into your life.”

Startlingly intimate, Wo Ai Ni Mommy follows the Sadowsky family as they struggle to incorporate their new daughter, who speaks no English, into their family. When the girl, Faith, demands to know why her parents would even want a Chinese daughter, her parents are shocked that multiculturalism is a concept that just doesn’t translate.

As a Chinese speaker, Wang-Breal ends up becoming Faith’s translator and ally, and through this friendship, she’s able to film some incredibly visceral images of childhood loneliness. It’s a cliché of verite filmmaking, but in this case it’s true — after a while the subject seems to forget that the cameras are there. Wang-Breal proves that in the best documentaries, the filmmakers don’t disappear; they just become members of the family.

I spoke to Wang-Breal before the screening. You can watch Wo Ai Ni Mommy for free here.

Filmmaker: How did you decide that you wanted to make a documentary about adoption?

Wang-Breal: My parents are both Chinese, and I grew up in a small town in Ohio. I was the only Chinese kid in my school…It was a real culture clash, so when I moved to New York and started meeting all these Chinese adoptees I started wondering what being Chinese meant to them.

Filmmaker: I was struck by how open the Sadowsky family really was. How did you go about you finding them?

Wang-Breal: This is my first feature documentary. I had no idea what I was doing, so I just talked to as many people as I could. I interviewed over 100 families. The parents had so much to say, but the children were still grasping, so I decided I wanted to follow someone who was going through the adoption… I recast my net and found a few families who were about to adopt an older child. Through that process, I found the Sadowsky’s. I met with them over a period of five months. I was putting all my own money [into the project], so I wanted them to trust me. They wanted to tell their story so more people might be attempted to adopt an older child.

Filmmaker: Very, very early on in the filming process, you became a de facto translator for Faith to her new family. Did you expect this to happen?

Wang-Breal: I know it sounds naive, but I just thought there’d be a translator the whole time, and in China there was, Layla, but she was on a clock. Once she was done for the day, she was done. During the day they actually met, Layla was talking to an official, so I jumped in. I knew I would translate every once in a while, but I didn’t think my voice would end up in the film.

Filmmaker: At what point did you know that you had enough for a feature?

Wang-Breal: I filmed for a period of two years. I felt like I could go on forever, and so that’s how I left the ending of the film. It was really about funding and when I could get enough funding to get an editor…I really did not think that this would ever come out. I said that to all the families that I interviewed. This might be a great home video. It can be really scary the whole time, and you don’t know if there is ever going to be a life for it. I feel so lucky that people believed in me. I’m so lucky that I found Faith. She’s just an amazing, an amazing.

Filmmaker: What’s the family’s response to the film?

Wang-Breal: First I showed it to Donna and Jeff, and they were blown away. They said, “You really just captured our family.” It’s very unsentimental. I really wanted to show that Donna had a strategy, and sometimes I questioned it myself, but it made sense to her and her family. I have no idea what it’s like to bring a new child into a household. We showed it to the whole family, and Faith thought it was embarrassing to see herself cry.