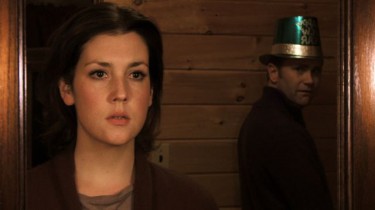 A few characters and a house — it’s one of the most durable movie starting-points, especially for first-time filmmakers. The latest to use the economy and natural dramatic focus of this concept is producer-turned-director Joe Infantolino, whose Helena from the Wedding opens today. Newlyweds Alex and Alice invite another couple for a New Year’s party at their mountain cabin. But when the quite beautiful and very single Helena is added to the mix, relationship fissures ensue. Helena from the Wedding is a deftly directed and very well acted film, a modest yet rewarding debut from Infantolino, whose producer credits include Run, Fatboy, Run, Face, and Our Song. Particularly notable among the cast is Melanie Lynskey (pictured), who debuted as the teen killer in Peter Jackson’s Heavenly Creatures and was most recently seen in The Informant!, Up in the Air, and Away We Go. I spoke to Infantolino very briefly back in the Spring just before his film premiered at SXSW, and here are some of his remarks.

Filmmaker: So, what was the moment when you decided to go from producing to directing?

Infantolino: I happened into hands-on filmmaking when I had the idea to make a short for an actor. [That film] was a confluence of the idea and actor. I did it almost as a lark, and I got really hooked on the experience. As soon as that was over I wanted to make a feature. I thought about what was doable, what was interesting to me and what I could do well for no money. I then really got into the idea when I got married. Until that time I had never thought about the way identity modulates with age and with certain events like marriage.

Filmmaker: What was your process developing the script?

Infantolino: The one limitation that I had is that [the story] had to be up at that cabin. It was also a practical thing — that was my family’s cabin in upstate New York. I wrote it and rewrote and rewrote it for a long time. I started much smaller — initially there were only three characters up at the cabin. I developed it very organically — writing it, thinking about it, and having a kid in the middle of it, which I’m sure impacted the direction of it.

Filmmaker: Was there much improvisation, or did the movie track the script?

Infantolino: I love improvisation but we didn’t have time. It was a strange situation because as a producer I have been through great scripts that were restructured in the editing room. This, we just shot everything and edited it in the same order. There were a lot of little things, minor trims, but it was amazingly [close to the script].

Filmmaker: How about rehearsal?

Infantolino: We didn’t get a chance to rehearse, I tried to get everyone to a dinner, but all I was able to tell was to just get them to stay at the same hotel and arrive a day early.

Filmmaker: What was your main creative worry while making the film?

Infantolino: A concern was to keep the story interesting and not have it be like a play because it is so confined. There were multiple storylines and cross cutting to provide energy and momentum. Festen was a big influence. It inspired me to take a bunch of people to a far away location. I am also a big Robert Altman fan. I just really wanted to set things in middle of nowhere, not be distracted, and focus on creating the thing.

Infantolino: We’ll see how it goes — they are different. I have learned a lot about producing from directing and vice versa. But I basically had to sell my house to make this film. I don’t know how many times I can do that, and I also don’t know if I have the personality as a director to make things that are calculated to get financing. But one of the appeals of writing and directing is that you know that your film is doable — it’s very different from producing. Producing for me has been about trying to get permission to do things, trying to do things that have the right scale so I can make a living and then balancing that with producing things I want to see. Directing is just like a gut instinct.