“SURVIVING HITLER” AT STRANGER THAN FICTION

by Mary Anderson Casavant
in Filmmaking
on Dec 1, 2010 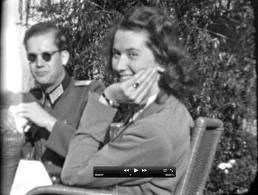 Documentary fans have survived many things — Academy  shortlists that ignore the year’s best films, the end of the Stranger Than Fiction fall season — but few can claim to have survived as much as the subjects of either Letters Home or Surviving Hitler: A Love Story, the final films of programmer Thom Power’s IFC series.

A nine-minute montage created around letters and archival materials, Letters Home tells the story of director Melissa Hacker’s great aunt Freda, a woman who traveled through Germany and Austria in 1945 as a member of the American Army Women’s Army Corps. Hacker, a longtime Stranger than Fiction attendee, introduced the film, saying that she was both “lucky and unlucky” to be born into a family of “pack rats.”

Similarly archival in focus, director John-Keith Wasson’s, Surviving Hitler: A Love Story, tells the story of Jutta and Helmuth, two people who fall in love while the world around them falls apart. When Helmuth joins the Valkyrie plot to assassinate Hitler, both Helmuth and the half-Jewish Jutta are tested beyond all measure. Weaving together interview with the steel-spined Jutta and extraordinarily intimate Super 8 footage, Wasson manages to tell Jutta’s remarkable story of how Jutta “fought to keep her wits,” during her encounters with the Gestapo.

After the screening, the audience was treated to a Q&A with both the director and Jutta, who told the audience that she wanted people to know that “not all Germans were ghastly creatures. There were people who did things to make life better.” When asked if she thought that what happened in Germany could ever happen again responded, “I can’t imagine it occurring again. Maybe I’m an optimist. I hope not.”  To steal a line from Edna Ferber, Hitler has no weapons against a woman like that.

Filmmaker: Were you looking for a documentary when you came across this topic or did you hear this story and think that it had to be a documentary?

Wasson: I think that’s the perennial documentary question…I was looking around, but this story fell in my lap. My Dad contacted me and said this friend of the family has a pretty great story. So I went on up thinking this would be a holocaust story. Within five minutes, Jutta’s making a cheese plate and making me soup. She said I’d love to tell my story, but it’s not a holocaust story, and she went on explaining that it was a love story… It wasn’t clear it was a documentary until I spent a few months figuring out that she had all this supporting material, the Super 8, and all these stills.

Filmmaker: As great as the story is, and it’s a great story, it must have been intimidating to dramatize since most of it took place in the past.

Wasson: It pulls your hair out. You hear a great story, but unlike a drama, you’re limited. You have to look for archival and something that dramatizes it. She and her fiancée happened to film this relationship and everything that happened, so we were able to access the past that way. The second question is how to handle reenactments, and then you just use your cheesy odometer to have something that’s going to tell the story versus take you out of the story. In the future, I’d do another history doc, but it’d have to be something more current, something that took place more recently.

Filmmaker: A lot of people have Super 8, but it’s usually just a couple of set up shots. What’s impressive about this material is that it has more of a texture to it – Helmuth really filmed intimate family moments that didn’t feel posed.

Wasson: I’ve transferred 8 MM before, and generally you’re excited to see them, but even as you’re lacing up the film, you wonder is this going to just be footage of a dog running around the yard. Helmuth happened to be an awesome cameraman, and he just happened to be focused on this love affair and her fiancée and her cameraman. Reel one is all of his family way before the war, and by reel two we see Jutta, and by reel three, we’re in Berlin, the war is going on, and there’s people looking upset, and by reel four, I knew I could tell this story.

Filmmaker: It’s interesting because it has the casualness of home movie footage, but it actually manages to tell a story — it’s not just generic footage.

Wasson: Sometimes he would do stuff where he would just take really great shots where it would be his POV driving down the road or play around with slow motion. He was shooting their lives, which was very much what our story was about, but he would go one step further and shot beautiful, observational footage, one with a dramatic arc, and that’s what’s great. It’s expressive. In a sense, we just edited together a film he began.

Filmmaker: Do you feel close to Helmuth even though you never met him?

Wasson: All I know about Helmuth is some letters he wrote to Jutta which are just so romantic and beautiful, and some interviews he had conducted where we hear his voice, and his presence, and I’ve really been just following his footsteps. He set up the template, and me and my editor I just pieced together this story, which is Jutta, I really love you, let’s make it through and have a life together. It was a very vicarious experience.

Filmmaker: Did you fundraise and then shoot or fundraise while you were shooting?

Wasson: I began putting aside a little bit of my own and family cash and putting stuff aside piecemeal, and that’s what happened for a year and a half, and ultimately it led to me applying for the Kruell fund, a Jewish fund in New York, which I got. It was a good, hefty portion of it, so it’s a mixture of two grants and myself and friends and family and at some point, we’ll get back whatever we can. It’s close to a shoestring as possible.In the future, I’d love not to do it this way ever again, but because I am a green director, I thought let’s just do it.