I haven’t done one of these in a while, so a few of these links are less than current. In any case, here are some links of interest from my Instapaper archives.

First, Instapaper itself, and its founder Marco Arment, got some love from today’s New York Times.

William Eggleston’s color photographs are among the most widely viewed, and widely admired, in the medium. But I wanted to survey Eggleston’s unseen, unpublished work—his B-sides, bootlegs, unreleased tracks—and to that end I made five trips to Memphis in the course of a year, rummaging through roughly 35,000 digital scans archived by the Eggleston Artistic Trust. The intention was to come up with a book of images rescued from near oblivion. The resulting selection—necessarily partial, narrow, subjective—favors pictures of people, many of them the photographer’s blood relatives and close friends…

Here’s one photo with commentary by Eggleston: 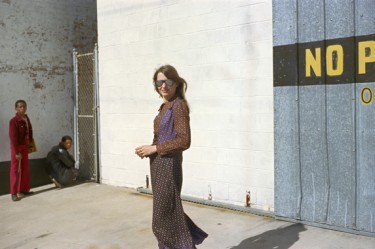 “She used to dance onstage with a hippie band called Insect Trust. Their music, you could say, was too new for me. You could say I never made the mistake of listening to their music. I was studying Bach at the time. I never made a mistake when I listened to Bach.”

Here’s a great post for screenwriters from Carson Reeves at Scriptshadow on writing the perfect script to, alternately, win a Nicholl Fellowship, make it onto the Black List, make a $1-million spec sale, create viral buzz or wallow in obscurity. Reeves ID’s the traits the cause scripts to excel in each category.

The Guardian on Wikileaks backlash and the beginning of the first global cyberwar. Related: at Scripting, “Are We Starting an All-Out War on the internet?” And, Clay Shirky strikes a balanced position in “Wikileaks and the Long Haul.”

At his blog, SEOmoz CEO Rand Fishkin on why “The Algorithm and the Crowd Are Not Enough.” A post on a promising new tech trend of start-ups that bring expert, curatorial and essentially human voices back to ‘net-based selection processes.

If you, like me and many others, are not a fan of iMDb’s new layout, then perhaps you’ve already checked out Less iMDb, a browser extension that streamlines and declutters the iMDb profile page. The extension was created by screenwriter John August and Ryan Nelson, and on his blog, August likens its development to “dogfooding,” the rewarding and recommended practice where you create what you want for yourself.

At Bad Lit, Mike Everleth lists and comments on some experimental filmmakers like Jem Cohen and Martha Colburn who are going to Sundance.

Ted Hope considers collapsing film-business models and wonders if a “360 deal” would make sense in the movie world in a post titled “Simple Observation: One Reason it is Hard to Finance Films.”

A.O. Scott think-piece in the Sunday New York Times Magazine on the topic du jour: the collapsing of fiction and documentary forms. An excerpt:

Movies that look or feel like documentaries are much more numerous, and far more perplexing, especially since video truthiness has become the default setting of so much media. When we say “like a documentary,” do we really mean “like one of those sitcoms pretending to be a documentary,” in which characters glance at and sometimes speak directly into the camera? “Like reality television?” “Like the evening news?” Or do we mean something less specific? Do we mean something that tries to make us forget we’re watching a movie, by giving us what seems like direct, raw, unmediated access to characters and their stories? Or do we mean the opposite: a film that reminds us with every awkward cut and jolting camera movement that what we are watching is not the literal truth? 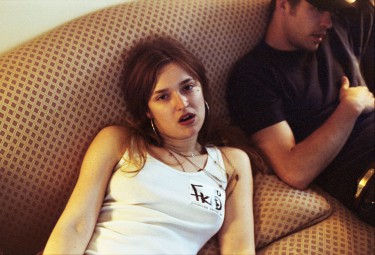 In today’s hyperreal visual landscape, erasing lines between fact and fiction has become a controversial trope. “First Love, Last Rites”—photographer Skye Parrott’s new solo show at Brooklyn’s Capricious Space—does just that, revisiting a year-and-a-half of the artist’s tumultuous teen years, beginning when she was 15 and in a relationship with her first love. Casting her real-life ex-boyfriend and a model as herself, Parrott recreated and photographed the events of her youth—defined by the couple’s drug addiction. The resulting works not only shed light on this hazy period of her life, but also provide real insight into the subjectivity of memory and the possibility of ever having a “true” experience.

Finally, a post that is both sad and a filmmaker’s moving testimonial to the value of friends: Sundance-bound Michael Tully writes about his friend Josh Levine in the wake of his accidental death.

Promotional note: we have a subscription sale going on until December 25. Discounted subscriptions, free copies of Jon Reiss’s essential Think Outside the Box Office, and a contest to win box sets from Criterion and Oscilloscope as well as other great gifts. Check it out here.