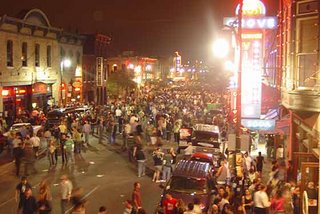 Thinking of those of you who are heading to SXSW for the first time, we asked some festival vets about some of the really important stuff — like where to find the best barbecue and where to nab free Wi-Fi. (The Austin Convention Center Wi-Fi gets overloaded and is notoriously slow.) What follows are the answers we received, but if you’d like to add your own comments to the mix, email us at editor.filmmakermagazine AT gmail.com

BEST BARBECUE
– “There is no simple answer to that question.” – Mike S. Ryan, producer and contributor to Hammertonail.com

– You have to leave town, sorry — it’s in Lockhart.” – Robert Byington, Austin local and director of RSO: Registered Sex Offender and Harmony & Me (Premiering at ND/NF)

“Hoeks pizza…. what more could you want after all that free beer?” – Joseph Armario, director, Jurassic Technology (Music Video Showcase)

“Whole Foods! You can’t go wrong there. Perfect for in-between screening meals. Beyond that – I’m vegan, so I’d recommend Casa De Luz, which is a macrobiotic buffet, and also Mothers, which has the best veggie burger in Austin, and Bouldin Creek, which is where I like to go for breakfast – and since breakfast is my favorite meal, I sometimes go there for lunch and dinner too.” — David Lowery, director St. Nick.

HOW TO ID A LOCAL VS. AN AUSTIN NATIVE
“The Local is already drunk and pronounces it “Gwa-dah-loop” — Frank Ross

“If they’re on 6th Street during SXSW, they’re probably not local.” — David Lowery

BEST BET FOR FREE STUFF INCL. FOOD
“Parties, for sure. And the Filmmakers Lounge. This is important if you’re poor and are planning on consisting on free things. You’ll be eating a lot of bagels and chips and salsa, beggars can’t be choosers. Sometimes they put little Cliff bars and stuff in the gift bags, but I just picked mine up and no dice. And alcohol seems to run like water everywhere that first weekend, so you can wash away your hunger pains with vodka.” — David Lowery

“My plan is to raid Byington’s house while he’s at screenings.” — Todd Sklar

FAVORITE MUSIC VENUE
“The CHURCH! Bela Flek, crazy percussion, people who bonk on tubas, amazing things happen in the church.” — Josephine Decker, Director of Bi The Way, SXSW ’08 and Where Are You Going, Elena? SXSW ’09

THOUGHTS ON PARTIES
“The official parties seem to be where people go, and I tag along. But it’s crowded and the food gets molested and I don’t like Peroni.” – Frank V. Ross

“Sixth Street, Unless you’re a fan of date rape and watching people soil themselves.” — Bob Byington

DO NOT MISS
“The LBJ Library has a Presidential limo in the Library.”– Bob Byington

“I’m always invited to Barton Springs. Not sure what it is but fun seems to have been had there.”– Frank V. Ross

“Barton Springs is beyond peaceful and necessary. The bats on South Congress live up to the hype as well.” – Todd Sklar

WORST SXSW MOMENT “Emailing Matt Dentler to say how sorry I was to see him go, and having the email automatically routed to Janet Pierson.”– Bob Byington

“The great ’07 nervous breakdown. But that didn’t have anything to do with the festival.” — David Lowery

BEST SXSW MOMENT
“Dance off between a professional mime, two beat-boxers, me and a man who had painted a unicorn on his penis at 3 am in the Enchanted Forest at the Bi The Way Movie Premiere Party SXSW ’08. When the beer ran out, we wandered over to a bonfire and listened to three forest gnomes play guitar.” — Josephine Decker

“Seeing someone drop their beer over a deck, then hurl themself over to save it.” – Joseph Armario

“Not getting into a party with a bunch of ther filmmakers and deciding instead to wander the streets of Austin in search of another soiree. We never found one, and instead found our own numbers growing as we wandered up and down the streets of downtown, creating our own flaneur party that was far livelier and edifying than whatever overcrowded event we were barred from surely would have been.” — David Lowery