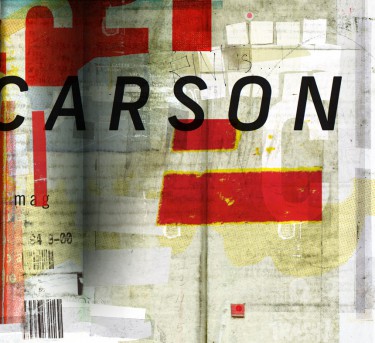 Back in the day, designing an issue of Filmmaker meant two or three weeks of long evenings sitting around our office in the DGA building on 57th street with our beloved designer Wayne Van Acker. Wayne passed away a few years ago, but I thought of him today when I saw this notice that designer David Carson is returning to print journalism with a new magazine titled, appropriately, Carson. We were — and still are — closet design geeks, and we always held up certain designers as our heroes. Neville Brody was the one we could all agree on, with me remembering his great design for the now-defunct U.K. magazine The Face back in the ’80s. But the ’90s were the days of David Carson, whose radical typography and conceptual approach to print design was making waves in advertisements, in the pages of Ray Gun magazine, and in his own books. (Like most pioneering artists, Carson came with a readymade piece of folklore, notably his resetting of any entire interview with Bryan Ferry in unreadable zapf dingbats.) Usually at some point in our design process I’d say, “Can’t we make it a bit more David Carson?” and Wayne would sputter, “But you can’t read his stuff!” I’d do it partly as a way to pull his leg, but also because I loved the spirit of Carson’s rulebook-throwing unorthodoxy and the sensual pleasures of his best work.

Carson, the magazine, has a website with minimal info, a press release, and a Paypal-linked subscription page. Six issues are going for $20.91.

“It’s not about being retro,” explained Alex Storch, the Editor-in-Chief. “It’s about pushing forward. People want quality things they can hold and touch, not pseudo-journalism and themed template design on their computers. We’re excited for people that have only seen David’s books and a heavily worn copy of Ray Gun to experience his mastery of the form. We’d also like them to read some inspiring articles as well.”

As writer Douglas Coupland says in Carson’s most recent book, Trek, “once something is declared over is exactly the moment it springs back to life.”

Storch and Carson have been soliciting contributions from established writers and artists as well as emerging talent in order to bring a new interest to print magazines that stretches past tabloid-style journalism.

“It seems like I’m always asking graphic designers to make their work resemble David Carson’s. It’s an aesthetic, but also a standard of quality. It’s that spirit from which I derived the name, and luckily he went along with it.”

Each issue will be themed, and will cover art, culture, design, fashion, and current events.

I’ll be subscribing. Can’t wait to see what Carson and Storch are up to.