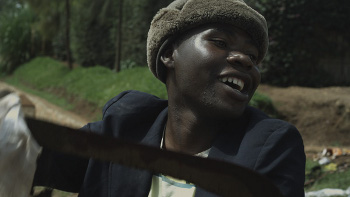 One of the biggest surprises while shooting Kinyarwanda on location in Rwanda is something that we may have just taken for granted. Frankly, it could have been a surprise in the U.S., in a community not familiar with low-budget or independent filmmaking. The community, many of our crew, and local officials seemed to have a really strong grasp of the work of big budget films — situations where, as a solution, money is often thrown at a problem. Many were also very familiar with the other extreme: people picking up a small camera and crew to make shorts and docs for relatively no money. In fact, I recall getting off the plane in Kigali and seeing tons of people with cameras. In town there were several people making short films, feature narratives and docs. Many were foreigners but there were many Rwandans creating their own independent productions. What was not so familiar and what took the U.S. production team by surprise was trying to explain that this film was somewhere in the middle. We did not have enough money to be considered a big budget but we had a bit more equipment, crew and resources than the average independent filmmaker. So we found ourselves trying to convince many of our Rwandan counterparts that the work could be done and things could be achieved creatively without tons of money, time or crew if we had a strong plan, a strong team and a lot of vision. The heads of the various departments were all Rwandans who previously were assistants to assistants on much larger films. So when faced with a problem they immediately brought up more money and even though I was the director (and would have appreciated fixing everything with more money) my response was often, “We cannot spend more money, let’s find other options.” This was often met with a long period of silence. Eventually when the rhythm got going and as the grip team built their own frames, and the electrician took apart and rebuilt electric ballast, and I sprinkled water on Vaseline-smeared faces to create sweat, everyone started to believe. We all learned lessons on this one, and we all became better filmmakers because we believed.