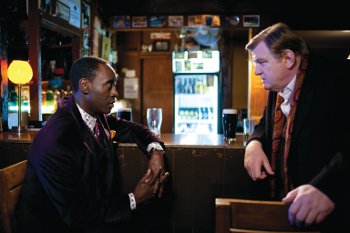 The biggest surprise for me occurred during preproduction. There was a scene in the screenplay where the three villains rendezvous at an amusement park and discuss the day’s events while waiting to ride on a rollercoaster. The scene with the screwball nature of the film was set in an actual amusement park in a seaside town in County Galway, Ireland, our location for the shoot. However little did I know that when the rollercoaster is out of use (during the non-summer months) it is packed up and shipped off to storage. So we arrived to find that our proposed set had disappeared.

Once the initial panic had passed, I looked off along the coast and saw a building that I vaguely remembered housed an aquarium. We scouted the aquarium, and I realized that the entire scene could unfold in exactly the same way while still retaining its screwball element. Not only that, but the vaguely sinister movements of the fish accorded symbolically with the sinister aspect of the villains. Plus I could pretend that the whole thing was an homage to The Lady from Shanghai. It turned out to be one of the best scenes in the film, and it occurred purely by happenstance. It would have been one of the greatest scenes in the whole if the conger eels had behaved.