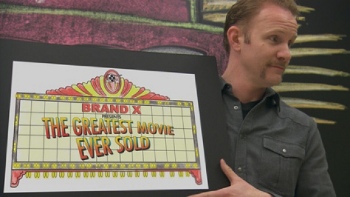 The biggest surprise for me in the making of The Greatest Movie Ever Sold was that we actually got brands and companies to not only agree to be in the film, but to actually pay for it.

I called hundreds of companies and had hundreds of doors slammed in my face. I had people tell me how they’d “get reamed,” “be a laughing stock” or “never work again” if they took part in the movie. But every once in a while we’d get someone who would actually call back and slowly the herd thinned out until there were only a few people still standing around willing to take part.

What I also found surprising was how scared advertising agencies and their representatives were of the film. They wanted nothing to do with it. We only got to one company through an agency, but it was the most important one… the first one. The rest were generated by phone calls from me and my producers.

What I think really comes across in The Greatest Movie Ever Sold is that it truly shows a power shift and power struggle happening across the industry, much like in the early days of TV, where we have to ask ourselves how much of what we’re seeing is in the mind of the artist and how much is being brought to us by the sponsor.