by Filmmaker Staff
in Sundance Responses
on Jan 19, 2011

Documentary, Eye of the Day, Leonard Retel Helmrich, Position Among The Stars, Shape of the Moon, Sundance Film Festival 2011 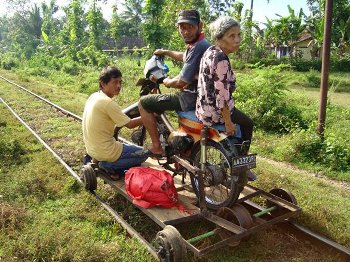 As a filmmaker you often hear the term “Kill your darlings” in order to make the story line of your film clear. The darling scenes are often scenes that reveal a poetic feeling, more than facts. Often I saw rough material of colleagues’ potentially beautiful poetic documentaries. But in the editing many of these films were demolished because too many darlings were killed. The story lines became clear but the poetry was gone. In other words, the facts were clear but the feelings were gone.

For Position Among the Stars we wanted to have a more clear story line than we had in the former two films of the trilogy, Eye of the Day and (the 2005 Sundance World Documentary Winner ) Shape of the Moon. When editing in a poetic way of storytelling you can line up the outcome of feelings of scenes together. But while for a clear story line, facts are the main building blocks. We wanted to have the facts clear without losing the feeling. So when we would use scenes where the feelings reveal the facts we should be on the right track in story telling. So no darling assassination. We had to embrace our darlings and built the story line only out of darlings.

When you have that much footage there are always some lucky moments in the footage. I call them the “darlings,” the “pearl scenes” of the footage. When you have enough of them you can make a smooth storyline like a pearl necklace using only “darling” scenes.

For the editing we had 300 hours of footage to choose from. If just one percent of those 300 hours were the lucky moments I would still end up with 3 hours of footage. So to line up those scenes together to make a 110-minute film wouldn’t have to be that difficult we thought. But it took us about 12 months.

Our biggest struggle was how to built a more character-driven story out of intuitively, poetic-shot footage of real-life situations without using a voiceover or interviews.

But scenes of real-life situations can be interpreted in many ways because real people are not flat characters. Real people carry a lot of personal drama with them that makes their behavior more difficult to predict. Therefore scenes in reality consist of many story lines in human drama interacting with other people’s personal drama. Small gestures reveal a lot of their inner state of being. When you know the people well you can predict their behavior some seconds before it reveals itself. And by using the way of shooting of “single-shot cinema” where you let your intuition lead you, you are even able to capture these small gestures.

The difficult thing was how to edit it in a way that the outcome of one scene leads in a logical way to the next scene.

We showed rough cuts to many colleagues and students at Harvard University. People liked the separate scenes but nobody could come up with a right solution for the story line.

Meanwhile when I was taking time off my editor Jasper Naaijkens and my co-scenarist/producer Hetty Naaijkens edited the film and gave it a fairly good story line. The facts lined up well but still there was something that made the film drag. About a month before the deadline a friend of mine, a fiction filmmaker named Orlow Seunke, who is based in Jakarta, made a rough cut in where he left out one of the darling scenes. Just one and he couldn’t explain me why he did that. It was a scene where the grandma finds a picture of her granddaughter together with a boyfriend. Grandma get angry and her Uncle Bakti forces her to tear up the picture. That was a very emotional moment in the film. But probably too emotional because when this scene was left out, suddenly the story became much more clear.

We still had to work another month to get the job done but it surprised me that killing just one darling could have such an impact on all the others.