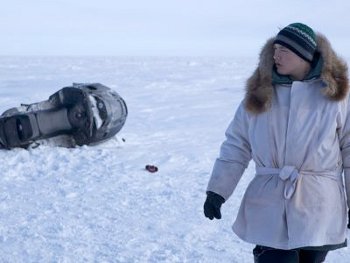 The element of surprise is built into the process of making movies.  Every film shoot is meticulously planned out in the smallest possible detail.  And every plan is thrown out the first day of filming.  This was definitely true for On the Ice.   We were trying to shoot a complex film with a large cast of non-actors, and many locations in one of the most remote places in the world.  Our most difficult location was the frozen Arctic Ocean.  Specifically we wanted to get to the lead, the place where the ice meets the open water.  Trouble is, on any given day there is no way to tell where the lead will be.  It might be two miles from shore, or it might be twenty, depending on the wind and ocean currents.  On many days there was no lead at all.  To further complicate things we were filming during the traditional spring whale hunt, which also happens at the lead, so we had to avoid disturbing the whaling teams that were out on the ice.  It was extremely challenging.

Trying to get out to the lead became a never ending odyssey. Each afternoon we would try to schedule the next day’s shooting schedule based on current weather conditions and the best forecast we could find.  But in the arctic, conditions change constantly and forecasts are about as useful as a string bikini.  Our AD, Kit, had to make revision after revision to the published schedule.  I think our record was something like fifteen published schedules in a single day.  It got so bad that Kit stopped leaving his hotel room at night for fear of running into a director or producer asking for another change.  The weather didn’t cooperate, and try as we might, we couldn’t make it to the lead.  In our frustration some of us went a little nuts.  The director of photography, Lol Crawley, started communing with a strangely beautiful, mythical being known only as “The Lead Creature.” (http://www.youtube.com/watch?v=kfuJW_QvdbE&feature=related)
Our opportunity finally came one afternoon, late in the shoot.  A lead had opened up some thirty miles away from our current location.  There was a temporary suspension of whaling in effect for the next 12 hours or so.  This was our chance.  We abandoned the current schedule, loaded everything and everyone onto sleds and took off for the lead.  It took hours of riding over rough ice trails.  Crew and equipment were bouncing around the hard wooden sleds, sometimes right off the sleds.    Snowmobiles got stuck in soft snow, some snowmobiles broke down from hauling tons of equipment and people.  The temperature plunged to twenty below zero.  We finally made it to the lead.  It was beautiful.  The water at the ice’s edge was glassy smooth.  The late evening sun painted the ice, water and sky various shades of pink and orange.  We got the shots we needed, and limped home, after a seventeen hour day.  We were exhausted, cold, and relieved.  Looking back, I’d say the biggest surprise is that we made it.